“We have an outmoded, outdated regulatory system in this country that needs to be fixed,” former Treasury Secretary Henry Paulson said Tuesday 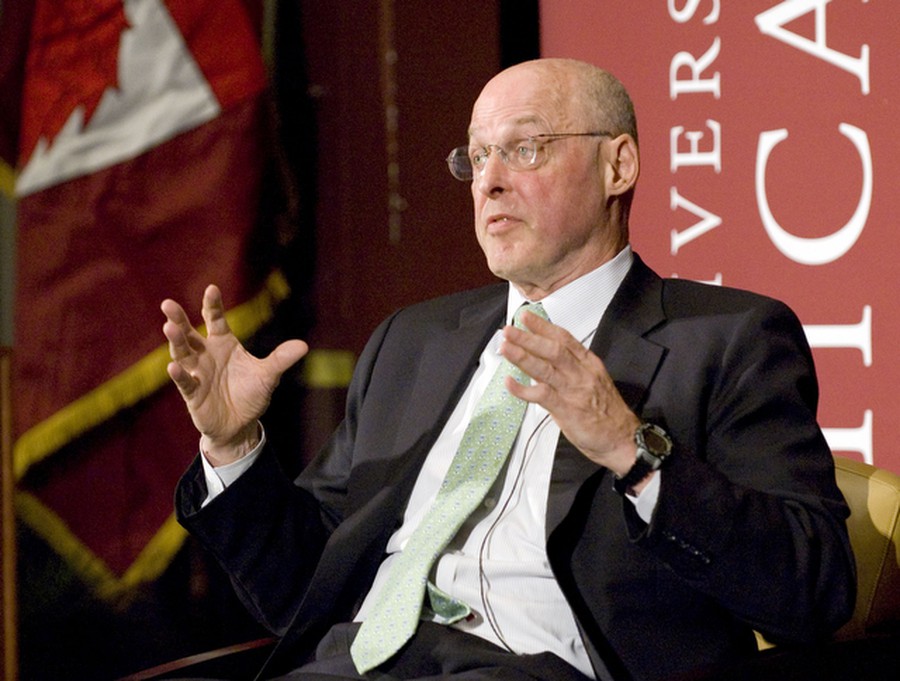 Former Treasury Secretary Henry Paulson criticized Congress’s inaction leading up to the recent financial crisis and defended how he handled in a talk Tuesday in Max Palevsky Cinema.

“We have an outmoded, outdated regulatory system in this country that needs to be fixed,” Paulson said to a packed Ida Noyes crowd. Paulson based his talk on his new book, On the Brink: Inside the Race to Stop the Collapse of the Global Financial System.

Paulson described the days leading up to the crisis as full of anxious attempts to kick-start governmental action. “We [Paulson, current Treasury Secretary Timothy Geithner, and Federal Reserve Chairman Ben Bernake] had a situation where we knew the arteries were clogged but members of Congress didn’t had to convince them we needed to act,” Paulson said. “I’m proud of what we did as first responders.”

While Paulson has been described as an influential force in keeping the crisis under control, in Tuesday’s talk he expressed his disappointment that the government wasn’t able to stop it all together. “We were racing against time to get reform,” Paulson said of the Treasury during the days preceding the crisis. “And it took the impending meltdown to get Congress to act.”

Although Congress’s prevented a quick reaction, which Paulson would have preferred, he recognized that things could have been much worse. “Today we have unemployment at 10 percent, which is a very serious problem. But if the system collapsed we’re looking at...easily 25 percent unemployment,” Paulson said. Congress eventually passed the Troubled Asset Relief Program, providing an unprecedented $700 billion for the bailout that Paulson said helped stabilize the financial sector. “I think it’s remarkable we got action from the Hill in the period we were dealing with,” Paulson said.

Paulson was quick to mention that true reform would require a change in corporate ideals as well as a change in Congress. “Even if we had a perfect regulatory structure, regulators wouldn’t be able to find all the problems,” Paulson said. There should be an increase in market discipline, companies should provide road maps for easy liquidation, and failed corporations can’t rely on government bailouts, Paulson argued.

The talk was moderated by Raghuram Rajan, a Booth School of Business professor and economic adviser to the prime minister of India. Rajan asked Paulson, who served as the chairman and CEO of Goldman Sachs before becoming Secretary of the Treasury in 2006, what career advice he could give to the Booth students in the audience.

“I don’t believe that you should be a career engineer,” Paulson said. “Find the right job and have it be something where you can grow and learn.”

Paulson is currently a Distinguished Visiting Scholar at the Johns Hopkins School of Advanced International Studies, a place where he can “hang his hat,” he told The Washington Post.