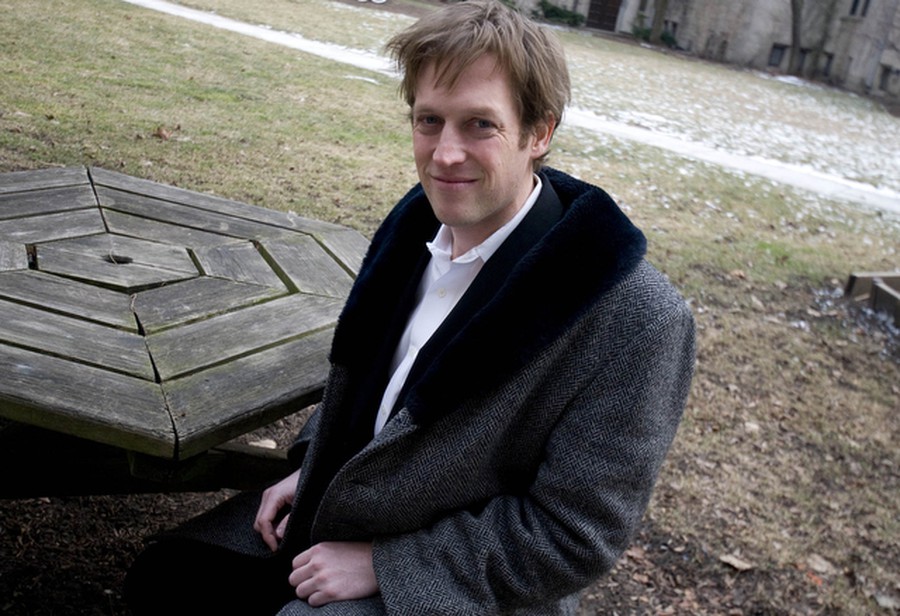 Amidst an ever-expanding selection of young adult fantasy novels, NSIT employee James Kennedy’s debut novel The Order of Odd-Fish carves its own niche in the genre. Where some books have vampires or wizards, The Order of Odd-Fish involves three-foot-tall cockroaches and armored ostriches. The MAROON sat down with Kennedy as he tells the history of some of the novel’s characters, as well as his own.

CM: So just to give an idea to the readers, what is the plot of The Order of Odd-Fish?

JK: It’s kind of like an urban Narnia, I guess you could describe it. It’s about this girl, Jo Larouche, who is foundin a washing machine when she was a baby with a note that said “This is Jo. Please take care of her. But beware. This is a dangerous baby.” And the reason why she was thought of as dangerous was because she was born in this fantastic world, this metropolis called Eldritch City. When she was born, it caused half the city to be destroyed and a lot of people were killed because this apocalyptic cult called the Silent Sisters believed she was a reincarnation of their world-ending goddess, called the All Devouring Mother. So Jo is whisked out of that world and brought to our world [where] she lives with her Aunt Lily. Thirteen years later, she and her aunt Lily come back to Eldritch City but she can’t tell anybody who she really is, otherwise, they will turn against her like they did thirteen years ago. So Jo and Aunt Lily join the Order of Odd-Fish, which is this knighthood that her parents and aunt were in. And each knight studies a different branch of useless knowledge. One knight studies unusual smells, one knight studies ludicrous weaponry, one knight studies the art and science of wasting time. And so Jo falls in love with Eldritch City. She makes friends, especially with the three-foot tall cockroach butlers, and she goes on quests on flying armored ostriches. But she finds out little by little that she is turning into the monster [a prophesy] said she would become, and she needs to find some way to stop this prophecy before it comes true.

CM: There are a lot of interesting characters in this book. Can you tell us the inspiration behind them, Aunt Lily, for example?

JK: There’s this place in Helendale, CA that used to exist called “Exotic World.” And it was run by someone, I forget her name, but she was a stripper from the 1930s and 40s. And she had this huge palace out in the middle of the desert that had paraphernalia of when she was a burlesque dancer. Every year, she would have all her old burlesque dancers come over and put on strip shows, and they were all 90 years old [which] was all very strange. I heard about it on the news and read about it on the internet, and it was fascinating enough that I wanted to put that in a book somehow, and I thought [to] put a thirteen year old girl who is not like that at all there and have this crazy aunt, who is kind of half senile, that she has to take care of, while she is more level headed. I think the character who has the most interesting story is the villain of the book, the Belgian Prankster. He’s this kind of whimsical Osama Bin Laden whose got his own kind of, like, apocalyptic T.V. show [where he goes] around the world doing these terrifying pranks: turning the Eifel Tower upside down, filling the Grand Canyon with pistachio pudding, things like that. He’s actually inspired by [an event] in 1997, I don’t know if you remember this, but when Bill Gates was in Belgium, some random guy ran out of the street and put a pie to Bill Gates’s face. The man is Noel Godin, and whenever the Associated Press or any of these major newspapers would refer to him, they would always say, ‘Belgian Prankster Noel Godin did this…’ and his thing is that he goes around putting pies in [the faces of] anybody he thinks is really pretentious and really ridiculous. He did it many times to that, oh God, who is that French philosopher who is very fashionable right now? I forget his name. Anyway he’s done it many times to people, and so I thought ‘what if… the Belgian Prankster… Belgian Prankster Noel Godin…’ It was kind of like a couple of years before that [incident] when the U.S. invaded Panama, referred to [Manuel] Noriega [former military leader of Panda] as “Panamanian Strongman Manuel Noriega.” It always seems that in journalism, they find these little tags that they associate with somebody, and they are kind of little poems in themselves. “Panamanian Strongman” it’s just fun to say. “Belgian Prankster,” there is a sinister lilt to it. It sounds like the name of a super villain. So I put that in my head for a while, and when I needed a villain who was very crazy, I had him be the Belgian Prankster. And it kind of feels like the Joker, or like the Comedian from Watchmen. And so I thought, ‘What if this Belgian Prankster graduated from just doing stunts, like putting a pie in somebody’s face, to more supernatural and insane stunts.’ And that’s where the Belgian Prankster came from.

CM: So it’s pretty much based off events that really happened, like that guy who threw that pie in Bill Gate’s face…

CM: So it’s about characters you hear about and then you make them into…

JK: Some of them. I don’t think many people remember Noel Godin anymore, it’s kind of a 1997 thing…

CM: They will now!

JK: Actually it’s really interesting. He’s still around; he still does this kind of thing, but Bill Gates was like the huge [deal]. He calls himself the "entarteur," which means the pie-er [in French]. And his followers, whenever they pie somebody, they all go: “Gloup, Gloup, Gloup.” They also call him Le Gloupier.

JK: Noel Godin, it’s worth looking into him. Anyway, not all characters are based on a real life person. Some of them have more interesting stories that I’m going to tell. Characters like Sefino are kind of based on readings of Evelyn Waugh novels and very entitled British people outraged about things. So… yeah.

CM: So from what you said earlier this book took you about ten years to complete. Can you give us some background about yourself and tell us why you started writing?

JK: I always wanted to be a novelist, but I wanted to be a children's and young adult fantasy novelist. But when I got to college, for some reason, I intuited that it would not be good for me to study English, and that I should study something else because maybe it would give me a fresh perspective...If your sensibility syncs up with everybody else...you are too synced up with everybody else and you are not going to write something that is different enough that will put you apart. That’s my theory. I also really wanted to be a physicist back then. I was studying the philosophy of science, like philosophy of space and time. I thought ‘Oh I’ll make it a career in that…” and then I got to the end of University and I was like ‘I do not want to do that.’ So I became a volunteer science teacher in the Archdiocese of Washington D.C. I lived in a convent with nuns and taught for nothing.

What fantasy is good for is taking experiences...and encoding them in such a way that our mind can deal with them and play with them and kind of get over the anxieties that we hold. For instance, Harry Potter is about the anxiety of going to school. And it playfully encodes those things, like: You don’t just get into a fistfight, you get into a duel with wands! And you just don’t have like a teacher who is mean, you have a teacher who is evil and is out to kill you! By blowing up all the problems of adolescence to absurd proportions, they ironically make it easier, and make them playthings that the anxious mind can play with and kind of get control of, and it makes you feel better about going to school. So if Harry Potter is about a boy fitting in at school, then [The Order of Odd-Fish] is about a young girl finding her place in the big city. So the things in a school story, things like troublesome teachers, making friends, making enemies, bullies, falling in love, things like that, in The Order of Odd-Fish there's things like getting lost or being in the wrong neighborhood in the wrong side of town or getting to know your neighborhood or getting caught in some weird kind of bureaucracy…

CM: So fantasy is kind of like having young people get over fear by making things seem just silly?

JK: Yeah, but I don’t want to take a completely instrumental view of art. Art has its own identity of making a thing in of its self...that needs no

justification outside of itself. But if there’s a psychological reason why people might be drawn into stories like this, it might be something like that. You ascend it to a certain level and you appreciate it for what it is. Like after 9/11, children all around were drawing pictures of planes flying into towers. And it’s not because they were perverse, it’s because they heard about it and had to find some way to control it and make it a mental thing they could deal with and they could play with so it’s something they can get over. If it’s something you are not allowed to talk about or if it’s something that you haven’t found a way to conceptualize, then it will overwhelm you. I just want to say that it’s not about making things silly. There are [themes in the book] that are deadly and serious. It’s just kind of whimsical and crazy, and it has its own dignity when it’s whimsical and crazy. For something to stick in the mind, it has to be translated into very vivid symbols, like magic. This is my own personal theory of fantasy, and it’s not sanctioned by anything.