Grooms get choked, a piano is smashed, saw pieces are thrown at an Andy Warhol picture on the wall, and smashed tomatoes litter the floor. Welcome to Big Love. 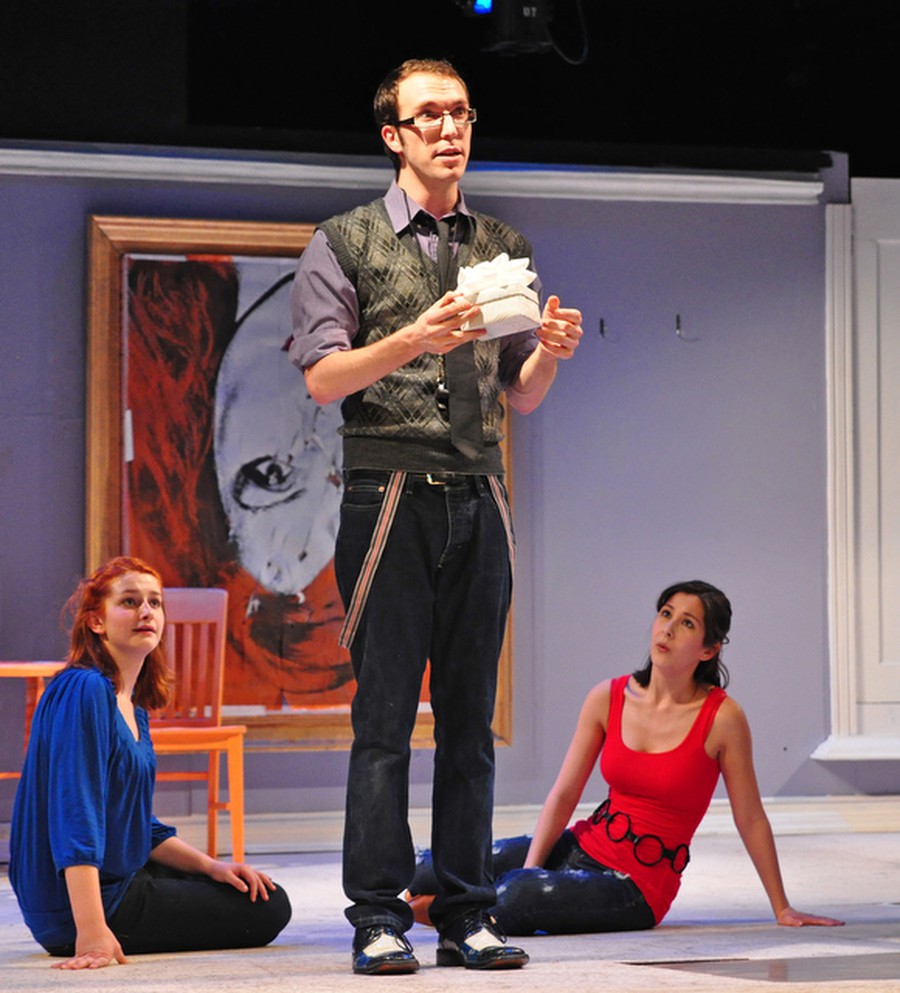 “Fight call!” Six bloodstained brides and their accompanying grooms traipse onto the stage and—quite literally—start fighting for their lives. While Lady Gaga croons out “Bad Romance,” grooms get choked, a piano is smashed, saw pieces are thrown at an Andy Warhol picture on the wall, and smashed tomatoes litter the floor. Welcome to UT’s production of Big Love.

To clarify, the show is not an adaptation of HBO’s hit show Big Love and has nothing to do with Mormons. Charles Mee, a playwright hailing from Evanston, wrote Big Love as an adaptation of the early Greek play The Suppliant Women by Aeschylus. The basic premise features 50 Greek sisters who must be wed off to their 50 Greek cousins due to a pre-marital contract. Mee’s adaptation provides a modern context so that the sisters, being the strong and rebellious women that they are, refuse to be confined to their predetermined fate. They escape to Italy where they are eventually chased down by their grooms and then, of course, all hell breaks loose.

Visually, the show is what some of the cast members have called a “technical theater extravaganza.” Second-year Evan Garrett, who plays Giuliano, says, “Ultimately, I think Big Love is a show for the technicians.” Working a show that requires blood to be thrown on white wedding dresses each performance posed a difficult challenge for the costume team. “It’s a lot of laundry,” costume assistant and second-year Molly Fitzmaurice admits. The production also demanded the use of such dangerous props as knives and saw blades, which added an extra element of “chaos” for the assistant stage manager, first-year Jake Smith. The greatest challenge for Smith during the show is “keeping everyone organized, safe, and alive.” Third-year Ellenor Riley-Condit, who plays Lydia, describes the show as an “intense experience…a huge bloodbath where people are fighting for their lives. But at the same time, my character actually falls in love and has a different journey from the rest.”

The tangled themes of love also appealed to fourth-year Alli Urbanik, who plays Thyonia. “I was attracted to this show because it has such a strong story,” she said. “The idea of love in many forms prevailing through the most extreme chaos is provocative and very relevant to today’s world.”

This timeliness, which contrasts with the play’s classical roots, is emphasized by the soundtrack composed by professional DJ Miles Polaski, who coordinated sound for the show. Polaski’s sound design incorporates a wide range of pop music, including Miley Cyrus, songs from Moulin Rouge, and Lady Gaga.

With six professionals at the helm of the show, Big Love is on a scale that hasn’t been seen at any other UT production this past year. Assistant Director and second-year William Bishop says that the difference for Big Love is comparable to the distinction between a political science student and a senator: “The first may be eager and excited, and sometimes they actually might be good at what they’re doing, but they’re still learning, and they’re not yet making massive waves. The second is a professional who actually has the ability to change things.”

Big Love promises to have the feel of a massive party where everything is just a little extreme. Bishop says that the audience should approach the play by imagining a sliding scale with love and chaos on either end. “I never really plan for what individual audience members feel,” Director Sean Graney commented. “I just hope people gain something from the experience of watching Big Love, but what that is, I’m not sure.”

Garrett also aspires to makes a lasting impression on Big Love’s audiences. “I really hope this piece of theater defies the general ‘I guess I should go’ mentality and remind unfamiliar audience members that theater can kick you in the balls. But in a good way.”