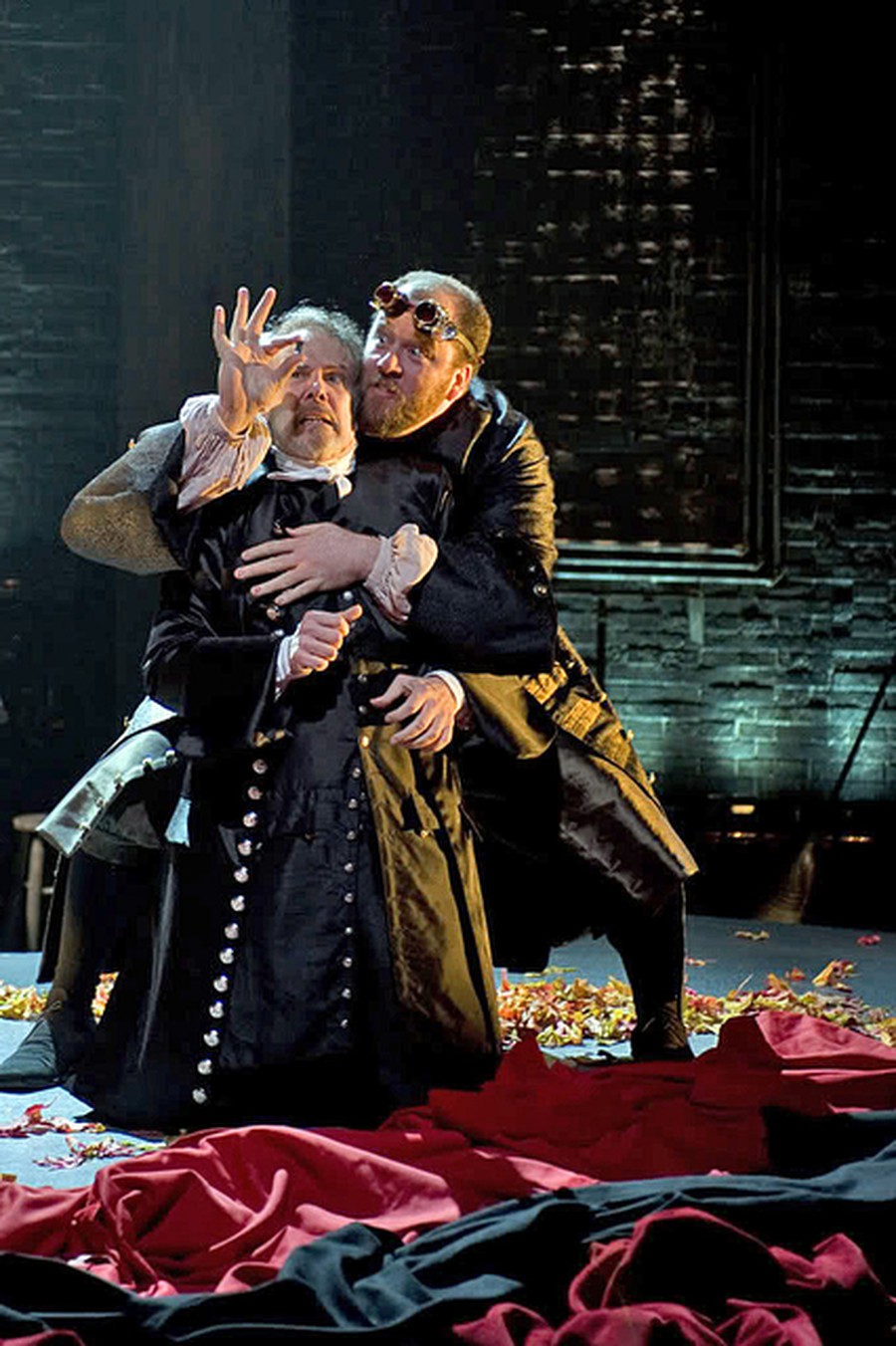 While there is no question that Tony Kushner’s The Illusion is a modern adaptation of Pierre Corneille’s early 17th-century comedy, proclaiming so would be an injustice to Kushner’s creativity, which stands in its own right as an excellent work of theater. From the moment it begins, the play shuttles the audience immediately into the action. The play’s two acts each begin with an unprovoked crash of a closing door as the theater goes dark. And from there it’s hard to look away.

The play takes place in the magician Alcandre’s cave, and revolves around his showing the visiting Pridamant visions of his disowned son. Both actors (Chris Sullivan and John Reeger, respectively), though they do not play a major role in the play, are consistently engrossing. Sullivan’s is the better performance, as he plays an imaginative combination of supernatural authoritarian and oddball tinkerer (at various times he seems to be orchestrating the visions, while at others seems to have as much control over them as Pridamant). Reeger, who at times expresses convincing remorse for how his character treats his son, has a tendency to fall into either melodramatic wails or unpersuasive authoritarian gestures.

The overall structure of the set design is tremendously compelling as well. The visions take place on a raised platform under which gears churn and seem to activate the magic which takes place. The story arc is divided into three visions, and here Kushner places his own stamp on Corneille’s complex narrative. Pridamant’s son (alternatively named first Calisto, then Clindor, and finally Theogenes; but all played by Michael Mahler) begins in a state of obsessive love for a nearby princess (Hillary Clemens, who also has three names throughout), and their interaction develops from there. While Corneille is famously concerned with the concept of theatricality within everyday life, Kushner’s text and Charles Newell’s direction emphasize a mix of slapstick and histrionic comedy with pockets of dark character traits and profound expressions of love and anguish.

While most of the dialogue and general action within the visions is strong, Mahler’s performance is the weakest. His attempt to inject a somewhat psychotically obsessive element in the character’s actions push Kushner’s over-the-top rhetoric too far and does not mix well with Clemens’ subtly complex desperation to fall in love. The indisputable gem of the supporting cast is Matamore, played by Timothy Edward Kane. A pompous, cowardly blowhard whom Clindor serves, Matamore is a mix between an incapable warrior hell-bent on conquering the world and a Musketeer. During the second vision, Kane has impeccable comedic timing in dispensing with diversely witty descriptions of the man’s conquests while being an obvious fop who almost asks to be ridiculed.

The play is a gripping and imaginative comedy which should hold almost any theater fan through to the completion of the three visions. Kushner, however, continues the narrative in a culmination of sorts between Alcandre and Pridamant where Alcandre attempts to give a one-minute analysis of the visions’ implications. Such reflection is best left to extended thought and slow recollection, and Kushner’s explanatory technique feels uncomfortably crammed in. The disappointing ending, however, does not take away from the entirety of the play’s world, where dramatic inpredictability and emotional intensity produce a thoroughly enjoyable experience.