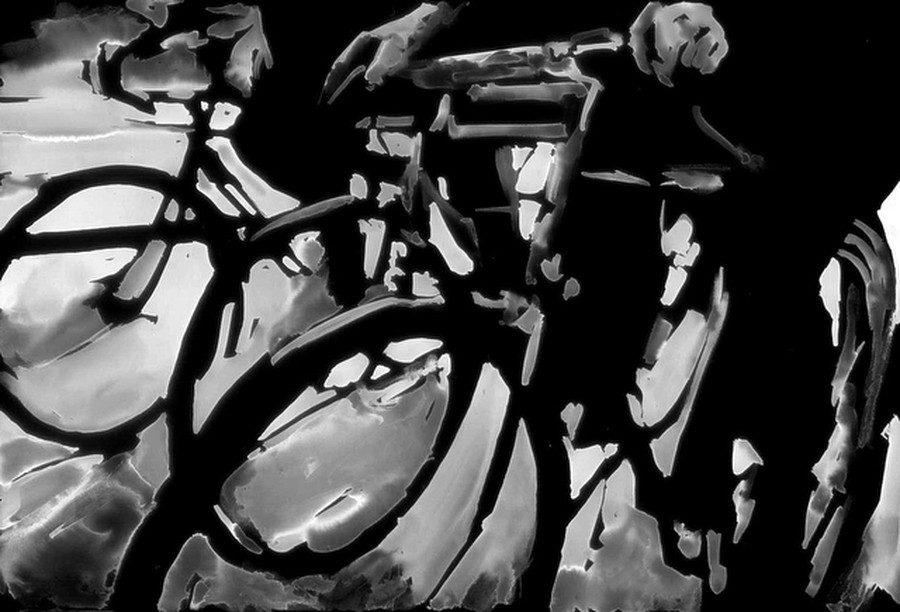 Fourth floor, Cobb. A colorful mix of students hurry to and from class on the left side of the hall; to the right, the stark blankness of the Renaissance Society is interrupted by a video screen projecting moving black and white figures. The figures transform and materialize into moving bicycles. German visual artist Matt Saunders provides a detailed, nuanced perspective, even as he reduces the world to black and white.

“Parallel Plot” is Saunders’ first solo museum show. In this exhibit, Saunders presents multiple interrelated works of drawings, short videos, paintings, and photographs, forming from disparate sources a new kind of story. All of his pieces are done in black and white, and Saunders makes the most of his colorless works by playing with negative images and contrasting them with the original. This inversion of black and white is at the heart of many of the pieces, both visually and thematically.

Saunders’ unique hybridization of painting and photography is exemplified in his “painted negatives” made using Mylar sketches developed on photo paper. The imagery of the negatives mostly includes human and abstract forms. Most of them are hung directly on the wall, without any kind of framing, giving the edges of the picture a slight curl as a result. Only a few pictures—portraits of people—are framed, creating a marked difference between the abstract “painted negatives” and the more formal portrait-style photographs. This marked juxtaposition highlights Saunders’ affinity for toying with the idea of recognition (or the lack thereof) and negative space.

Not to be upstaged by their still, single-frame counterparts, five different videos are projected in the exhibit. Some are large, taking up great space on the wall, while others only take up a small corner. The videos are animated, all black and white, and are in constant motion, moving through cycles of scenes. Though each video portrays different and seemingly disparate kinds of images—ranging from bicyclers, to a young boy, to a man smoking—they still relate to each other in form and style. Shapes emerge and repeat from a seemingly coincidental jumble of shapes and lines, and on-screen movement is intensified by the change from black to white and back again. And the similar dichromatic style gives the whole exhibit a unified look, even with disparate subject matter.

This continuity is also seen in the layout of the show as similar pieces are placed together. Some neighboring pieces have similar subject matter, while others only have their medium in common, which gives a nice flow in the gallery, as it leads the viewer from one type of piece to the next. The gallery as a whole gives a large variety of characters and ways of portraying them, drawing a contrast between the seemingly haphazard and the more put-together pieces. The exhibit is worth crossing the great 4th floor divide and entering Saunders’ stark domain.