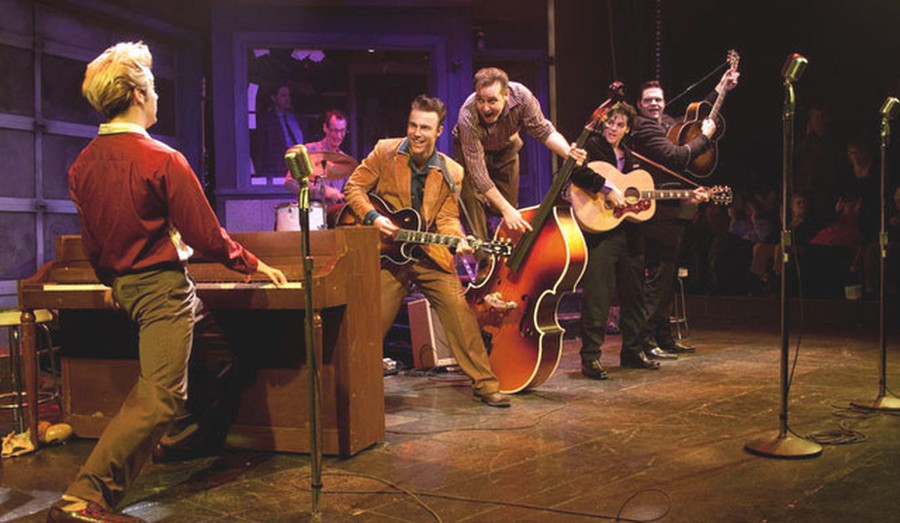 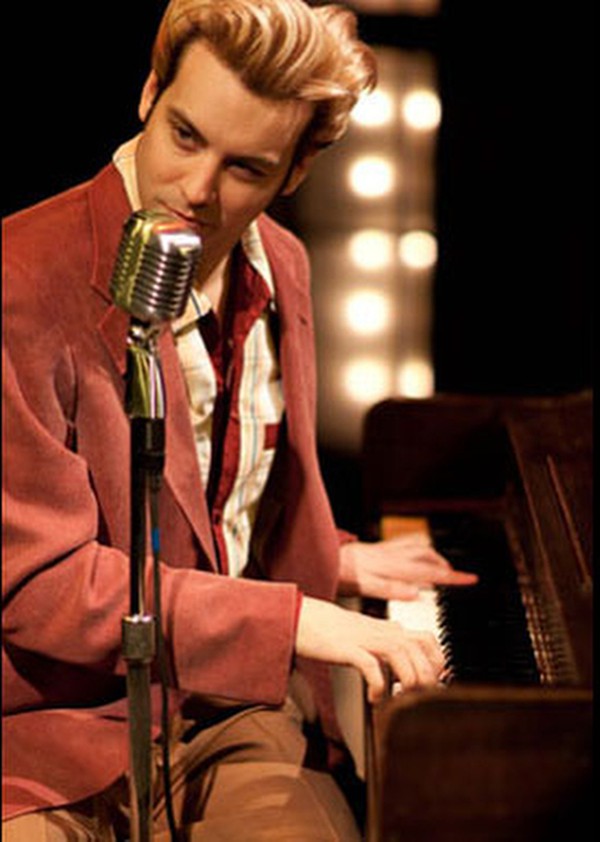 It is December 3, 1956. Four of the greatest innovators in music are put together in a studio to combine their talents. Million Dollar Quartet, currently showing at the Apollo Theatre, combines musical theater with rock ‘n’ roll and centers around this exceptional artistic collaboration.

The show promises a journey back into an historical moment when four country boys, during the escalation of their musical careers, united in a spontaneous recording session in the storefront studio of Sun Records in Memphis, TN. Record producer Sam Phillips combined the talents of Elvis Presley, Carl Perkins, Jerry Lee Lewis, and Johnny Cash, which the production accurately calls “the greatest rock jam sessions of all time.”

I expected the performance to be a nostalgic experience—a voyage away from contemporary concerns to the conservative and more rural world that Carl Perkins’s “Blue Suede Shoes” and Jerry Lee Lewis’s “Great Balls of Fire” burst into. I expected a piece of theater that would explore the complexities and tensions of the ’50s, juxtaposed with each of the performers’ internal, more obscure struggles. But director Eric Schaeffer and writer-director Floyd Mutrux decided not to examine the issues buried underneath Elvis’ hair gel or the pain hidden in Johnny Cash’s aching throat. It's like taking the meaning out of the color in Pleasantville. They oversaw the “recording studio” as a potential setting for tension, ego clashes, and character disclosures.

The plot is not completely without tension, though. We do see Sam Phillips confront Johnny Cash, Elvis Presley, and Carl Perkins as they reveal to him their decision to sign on to more “mainstream” record labels. And we also see the conflict that develops as the young, still unknown Jerry Lee Lewis attempts to show off his talent to the other “rising stars.” Nonetheless, the tension is often predictable, underdeveloped, and is either unsatisfactorily resolved or unconvincingly ushered out through the sudden beginning of a musical piece.

The acting and musical performances aren’t those of a good imitation group either. Perhaps the play’s greatest sin is that of David Lago’s imitation of “The King.” Lago’s representation of Elvis Presley is childish, as opposed to suave, with his facial and corporeal expressions seeming agitated and weird, rather than sexy and smooth. He appears small and hyperactive when he should be confident. Not even his final rendition of “Hound Dog” saves him from butchering the image of “the Boy from Tupelo.”

While Lance Lipinsky as Jerry Lee Lewis and Gabe Bowling as Carl Perkins are talented musicians, their acting is merely passable and far from extraordinary. Perhaps what keeps the show from sinking is Sean Sullivan’s representation of Johnny Cash. His presence is sober and his dialogue modest, but his talent automatically draws his authority on stage. I could not help but feeling the bittersweet, stinging sentiment of Cash’s music as Sullivan sang to the chords of “I Walk The Line.” Bravo to Sullivan for being talented enough to portray a Cash who transcends the restrictions of the mediocre writing.

At the end of the show, when the Million Dollar Quartet gives its “live concert,” the production’s gray-haired audience suddenly begin to scream, sing, dance, and do all types of awkward, potentially hazardous motions. Rock ’n’ roll becomes the “idol” that it once was, and the pulsing world of the ’50s comes alive in the theater. The devil of rock and roll is alive again, and the near-insane audience reaction makes the whole place vibrate.

As promised, the Million Dollar Quartet does revive rock ’n’ roll—but the revival is long and painful. The last three songs efficiently portray the catharsis of the “greatest gig of rock ’n’ roll,” but the climax of the show comes at the end and, in my opinion, way too late.