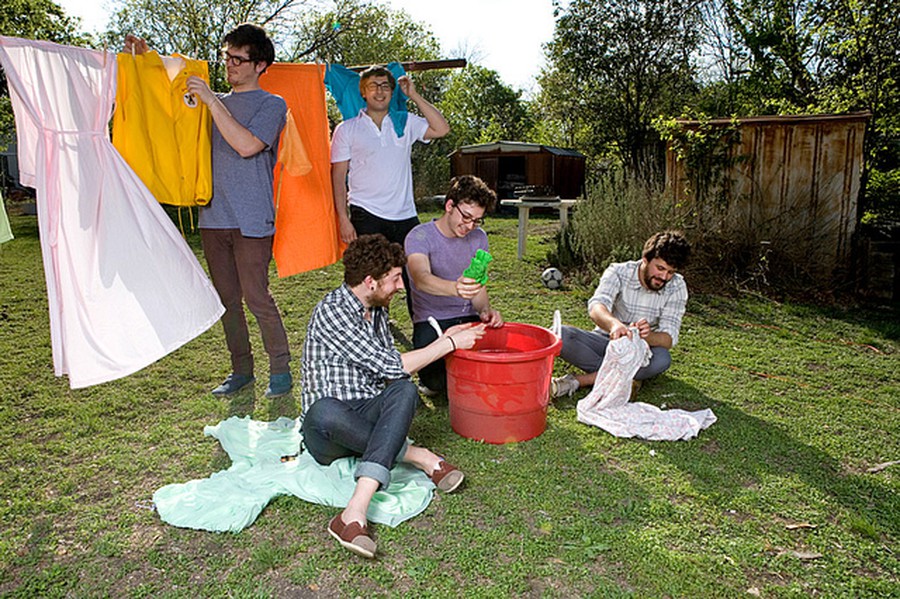 You know it’s going to be good when the opening beat of the drum machine brings everyone in the Congress Theater to their feet. Passion Pit, the five-man electropop outfit from Cambridge, MA, played its second sold-out concert at the Congress Theater April 22. After an upbeat opening with “I’ve Got Your Number,” frontman Michael Angelakos revealed that he was suffering from a severe sinus infection, which he apparently intended to cure by drinking water and singing in his signature yowling falsetto. As a result, their set was understandably short, but Angelakos was buoyed by the audience’s energy and only showed signs of fatigue between songs.

The band then moved into “Make Light,” whose insistent beat and accompanying light show had the entire floor of the ballroom bouncing in unison. It’s not really possible to be still during a Passion Pit song, and though the acoustics of the Congress rendered most of the lyrics unintelligible, the sound was well mixed to show off this diverse and talented group of musicians.

This is a fantastically energetic band, and even the most sedate members of the audience were pulled to their feet. The ground-floor crowd seemed to be mostly teens and tweens dancing and crowd surfing throughout the set, but there were hippies of all ages—including one puckish fan who managed to skirt past the bouncer at the front and dance around the bemused band members.

Energy can only take you so far, as the poorly mixed and jangly opening band The Smith Westerns showed, but luckily Passion Pit is made up of some remarkably skilled musicians. Angelakos (lead vocals and keyboards) is joined by Ian Hultquist (keyboards/guitar), Ayad Al Adhamy (synth/samples), Jeff Apruzzese (bass), and Nate Donmoyer (drums). Their first EP, Chunk of Change, began as a Valentine’s Day gift for Angelakos’ then-girlfriend, composed in his dorm room at Emerson College. The band played several of these earlier songs, including “Better Things.” “You’re gonna drive me crazy,” Angelakos sang, “You’re gonna drive me mad.” Interesting lyrical choices for a romantic gift.

The joyous major chords and interwoven beats of “The Reeling” and “Moth’s Wings” showcased the layered complexity of the band’s multifaceted sounds. “To Kingdom Come,” with its delightfully nonsensical lyrics—/I felt a hush fall quietly from my spark/ so now I hide in piles of princely orange peels/—reaffirmed its place as my favorite of their songs for its varied sounds, its irresistibly upbeat melodies, and the fact that it finds a rhyme for “potpourri.”

It is a credit to Angelakos’s talent as a singer that he was able to maintain his range, particularly his falsetto and shouts, throughout the entire set, despite his illness. The other members of the band played out as well, dancing around their instruments (particularly impressive given that 80 percent of the band is playing keyboards).

Their closing song was “Little Secrets,” an endearingly catchy song that had the whole ballroom singing along under Angelakos’s direction. And that was it. Forty five minutes after they came onstage, Passion Pit was done. The setlist was short and sweet, well under an hour with an encore of “Sleepyhead,” one of their best-known songs. Better to be left wanting more, I suppose, than to be constantly checking your watch. Hearing the kinds of things Angelakos can do alone in his room, with his band, or even with a sinus infection, I’m certain Passion Pit will deliver more interesting and irresistible pop in the future.