The Good Negro shows the personal side of political struggle 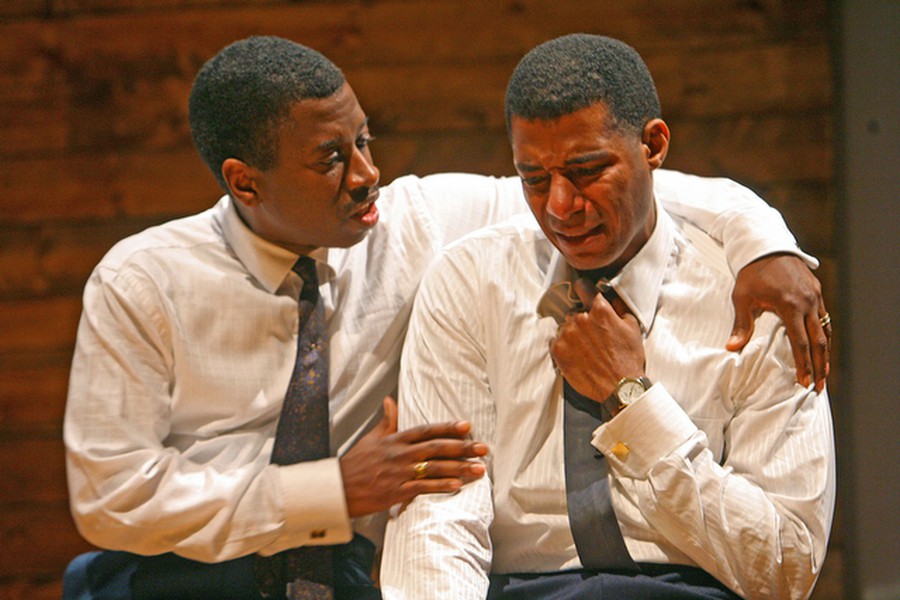 Everyone learns about the civil rights movement at some point—usually in an unenthusiastic high school American History class. But what we are often taught are simple dates, names, and heroic deeds. In Tracy Scott Wilson’s new play, The Good Negro, playing at Goodman Theatre, Wilson goes beyond these basic facts to depict the humanity in the flawed heroes of the movement, reminding the audience that these people who changed the very course of history were, in fact, human.

The play is set in early-60s Birmingham, Alabama. The South is alive with civic unrest, and Reverend James Lawrence has come to Birmingham with wife Corinne, friend Reverend Henry Evans, and newly hired European businessman Bill Rutherford, intent on exploring the possibility of organizing a movement. Lawrence, Evans, and Rutherford assess the situation politically, attempting to sort out which incidents of segregation could prove useful to their cause. Enter Claudette Sullivan, beaten for allowing her four-year-old daughter to use the white restroom. Sullivan ends up being what Lawrence is so desperately looking for: a “good negro,” with a respectable past, sweet disposition, and a willingness to speak out, despite the misgivings of her husband, Pelzie.

What ensues is a struggle to maintain good press and organization, working against FBI agents Steve Lane and Paul Moore who are intent on keeping the peace and discrediting Lawrence. The two even go so far as to hire Gary Thomas Rowe, Jr., the stereotypical ignorant white supremacist, to infiltrate the KKK. Many challenges arise in the campaign, including discovery of Lawrence’s penchant for infidelity, rising tensions between Evans and Rutherford, and Pelzie’s gradual drift toward madness.

The performances of the entire cast were astounding in their lucidity. Though the events of the play are fictionalized, some of the characters are based on historical figures­—most notably, Lawrence resembles Martin Luther King, Jr. in his rhetoric and style of preaching. Played by Billy Eugene Jones, Lawrence’s character comes alive, complete with his human failings. He spends a good deal of the play preaching freedom, specifically freedom from segregation. Yet we quickly discover that his life is rife with infidelity, ironically justifying his actions by saying, “It's the only time I feel free.”

However, I found the character of Corinne Lawrence, played by Karen Aldridge, to be the most unquestionably compelling. She plays the supportive wife to a T, comforting and reassuring her worry-wrought husband at every turn. When a tape recording of Lawrence with another woman is sent to her home, Aldridge pushes her character to the brink, confronting Lawrence with passionate hurt and dismissing his excuses of loneliness: “I got lonely too. All the time. But there’s no tape of me out there,” she tells him coldly before walking out of the scene.

Despite such heavy subject material, Wilson does remarkably well at including a healthy amount of comic relief. The character of Rowe, played by Dan Waller, is especially apt at making the audience laugh. With a thick southern accent and an even thicker head, Rowe bumbles through his KKK recon, calling himself a Fed in order to pick up women. His over-dramatic attitude, coupled with Rutherford’s social ineptitude and Evans’s wit, provide enough laughter to carry the play through its darkness.

Walking into the theater to see The Good Negro, I didn’t know what to expect. My memories of American History class are fuzzy at best, and I was afraid my lack of knowledge would greatly hamper my enjoyment of the play. But it didn’t. Wilson successfully illustrates the complexity of the civil rights movement—the politics, the relationships, the tragedy, the humor—and its emphasis on individuals, not necessarily the great motherboard of history. Even when faced with his own frailty, Lawrence does his best to rise above it, remarking, “I’m not the issue here. Segregation is the issue,” and proving that his heroism is ultimately intertwined with his own flawed humanity.