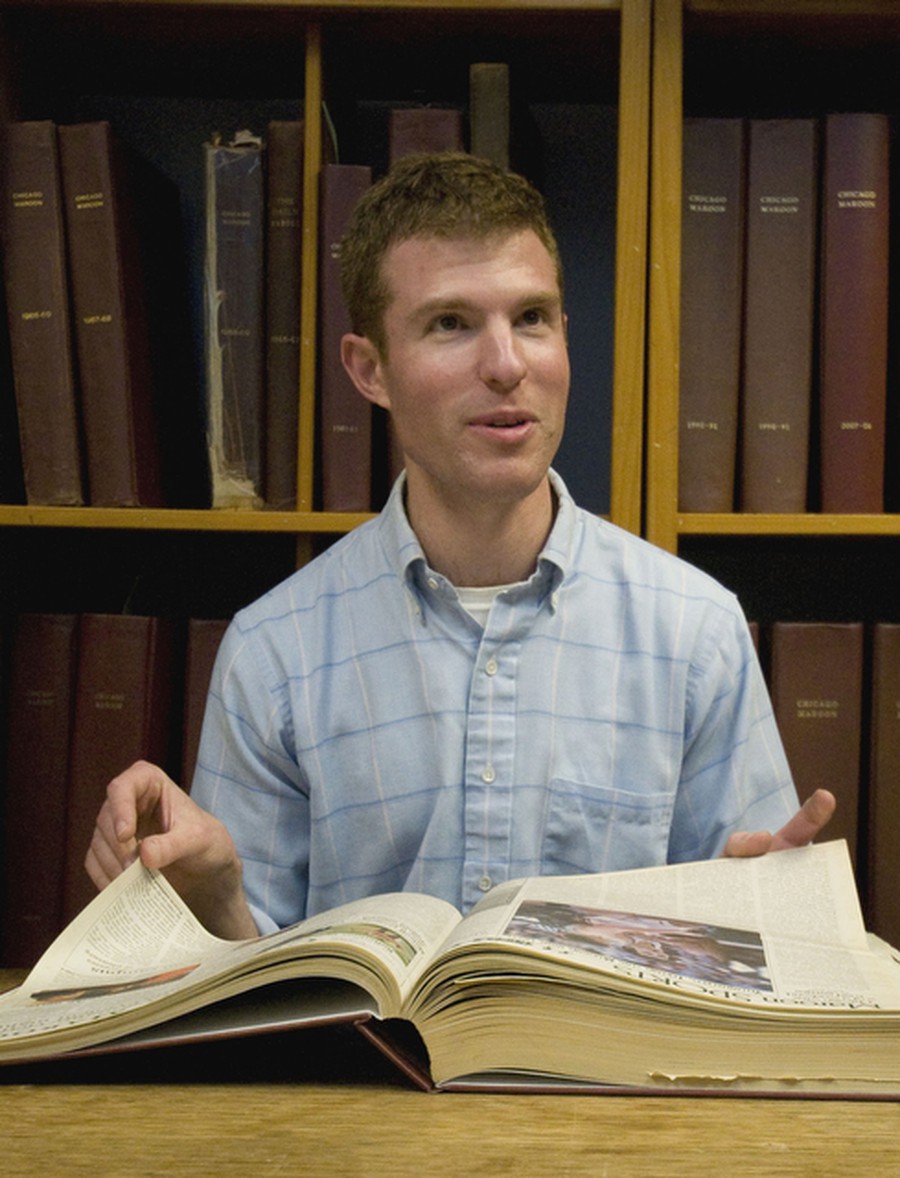 If there’s ever been a time for us at the Maroon to brag, it’s now. See, former News editor Daniel Gilbert (A.B. ’05) won a Pulitzer Prize last month. His paper, the Bristol Herald Courier, won the 2010 Pulitzer for public service reporting for Gilbert’s eight-part series on an obscure escrow fund set up by the Virginia government that allowed oil companies to drain natural gas without paying landowners; they came out after 13 months of reporting. An international relations major, Gilbert only joined the Maroon in his third year; he didn’t mention wanting the Prize to inspire others to do the same. He sat down at his old desk to talk about the Pulitzer, the Easter bunny, and drinking with the Chairman of the Joint Chiefs of Staff.

Chicago Maroon: What did you want to accomplish with the series that won you the Pulitzer?

Daniel Gilbert: I wanted to find out why people are not being paid, why are royalties going into escrow, what oversight is there of the process. And if there is no oversight, are companies paying what they are required to pay? And then if they’re not, who are the victims? That last angle was crucial... It’s not going to resonate if people don’t identify on a personal level.

CM: Now that you worked on such a large project, are the small stories a piece of cake?

DG: Not at all.... My editor likes to tell the story that nine days before we won the Pulitzer Prize, I was covering an Easter egg hunt. On a staff of seven people, we all have daily work and write community features. Those stories are sometimes the most challenging...where you don’t know anything that makes a story particularly newsworthy but have to look for something engaging.

CM: So what was the angle on the Easter bunny story?

DG: What I ended up asking was, How is it that one becomes an Easter bunny? I talked to a couple of people dressed up as Easter bunnies and led with that.

CM: What, if anything, did you like about being a student at the U of C?

DG: I actually liked the University of Chicago, so I don’t know if it’s easy for me to single out one thing. It might be the Pub.

DG: I can’t remember if I was leaving the office or somewhere else in [Ida Noyes], but I walked out the door and I saw black SUVs all over the place and men in suits with earpieces and I thought, “Something’s up here. What’s the deal, who’s here, and why don’t I know about it?”

I went down into the basement and saw more people and walked into the Pub and it’s packed with Secret Service types and military types.... I asked one woman who said, “It’s the Chairman of the Joint Chiefs of Staff...” I made my way over there, I had a notepad out, and introduced myself to the general and asked him a few questions. I remember he offered to buy me a drink and said, “Let me buy you a beer.”

I didn’t take him up on it because I wanted to write something and didn’t feel like I could drink and write at the same time, although now I wish I could have tried harder so I could say I had a beer with Peter Pace...I remember him being incredibly down to earth, very cool and at ease...I think it ran as a Q&A on the front page.

CM: What was your favorite part about working for the Maroon?

DG: To leave knowing that you just put the paper to bed and everyone else is sleeping and you’re just coming home from work is a bit of a jolt. I used to live on Drexel, and you walk across the campus and you might even see the early morning light—it’s a special time for sure.

CM: Thirteen months of reporting [on the natural gas escrow fund] leaves you with a lot of information. Who helped fact check?

DG: A great deal of that burden was on me because I know far more about that story than my editors... When it came down to the actual computer analysis that showed these companies aren’t complying with the law, I sent it to the companies and said, “You fact check it... here’s the problem, please explain it.” One company looked at it and said, “You’re right, we messed up, we’ll fix it...” The other company said, “We’re not going to have that conversation with you,” and have subsequently paid hundreds of thousands of dollars in delinquency royalties.

CM: The most recent articles talk about how the new laws aren’t really making progress. How does it feel that the issue isn’t resolved yet?

DG: You can’t write a big eight-part series and expect people to read that and do the right thing, and you can’t wait for legislators to introduce legislation and just trust that it’s going to work. I didn’t, and have maintained a level of appropriate journalism skepticism through the process...I’ve got the ball rolling, but it’s important to make sure the people who deserve relief get relief.

CM: Have you ever considered a more hands-on position, like becoming a legislator?

DG: There’s a reason why I’m not in public office--I think I’m more effective as a journalist... I’m in the business of asking questions and clarifying things. A little bit of the Socratic method goes a long way.

CM: What is the key to being a good reporter?

DG: If you ask a good question, you’re going to get something that’s of interest, but you have to be careful to choose your line of inquiry... I had what I thought was a legitimate, important question, and I never think twice about asking what I think is a good question.