The show must go on: Students revive school circus 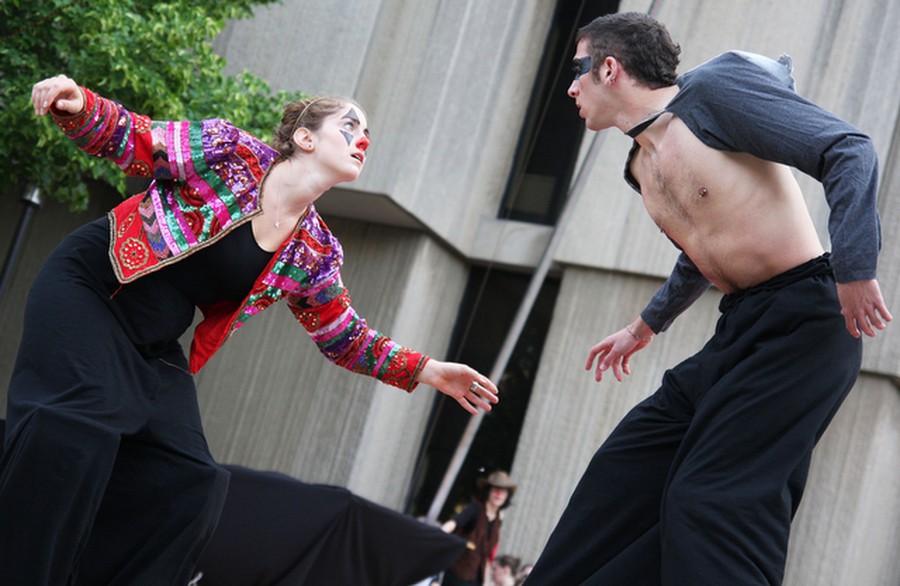 When all else fails, just run away and join the circus. While some of us may consider this when the readings pile up and chemistry exams overwhelm us, it’s doubtful that any of us will actually run away and fulfill our dreams of becoming a trapeze artist. But unlike most teenagers, second-year Lucy Little actually left home and joined a performance troupe. She traveled the country for six months with Criss Cross Circus, operating from a bus that ran off vegetable oil. It was this experience as well as her experience growing up (she began fire-spinning when she was 13) that drove her to bring back the circus to the University of Chicago campus.

Earlier this year, Little applied for the Uncommon Fund, a $40,000 communal grant by the University to fund non-academic student projects. Little wanted to revive the once-vibrant Le Vorris and Vox Circus, which began as an independent reading course at the university. By 2002, interest in the course was waning, so a group of students decided if they couldn’t study circus, at least they could perform in one—and so Le Vorris and Vox was born. In the spring of 2008, the students who managed the circus graduated and the performances stopped. Little decided that she would revive the circus and, in her second year, pursued her dream. After being selected as one of the 13 lucky projects (from a pool of 54) to receive funds from the University, Little’s dream became reality. “It’s really been a downhill spiral of great things,” she said. “It’s been amazing.”

Since winter, the circus troupe has been preparing for their opening show, which took place this past Saturday. They compiled a group of 15 performers—some seasoned performers with experience stilt-walking and playing with fire, and others who only had a budding interest in the circus. Some members of the group are also members of JELLY, or Jugglers Enriching Lives Like Yours—an RSO that has also experienced recent revival thanks to Hillel Wayne. The troupe was responsible for equipment, too; building stilts made out of wood pieces, screws, bolts, and duct tape, and constructing masks out of papier mâché. For the show, they rented a steel aerial apparatus to do silk performance.

Last weekend on Bartlett Quad, Le Vorris and Vox put on an entertaining opening showcase, which will hopefully be the first of many. The audience consisted of a mix of college students and families, and everyone seemed quite impressed with the show. In its entirety, the show featured many acts with dancing, acrobatics, stilt-walkers, fire, poi, cyr wheel, and juggling. While some pieces in the show relied on simple acting and flashy colors, other parts of the show were more enjoyable and dangerous. Fourth-year Stephen Patrias impressed the audience with his performance on the cyr wheel, which is a kind of giant metal hoop made that moves around the ground with the acrobat positioned inside. Patrias at one point remained in the hoop as it rolled around, holding himself with only one arm and other times with one leg. Equally impressive were the two human towers, comprised of a three-man stand (“three-high,” in circus terms) and a human pyramid five people high. One of the most difficult and daring parts of the show featured third-year Alessandra Stevens performing with the silks from an aerial apparatus. Two extremely long pieces of silk hang from this nearly 20-foot-high structure, which the performer wraps around her legs and arms in order to crawl up the silks and suspend herself in the air. Stevens quickly moved from pose to pose, wowing the audience with her skill and flexibility.

The hour-long show was quite stunning; especially considering rehearsals ran for only two weeks prior to the performance. Le Vorris and Vox has big plans for next year—Little hopes to have one big show per year with aerial performance and two ground shows for each of the other quarters. With this performance behind her, Little is beginning to accomplish her goals of getting her show the attention it deserves. In her words, “People are going to start talking about the circus again.”