Looking underneath the Mansueto 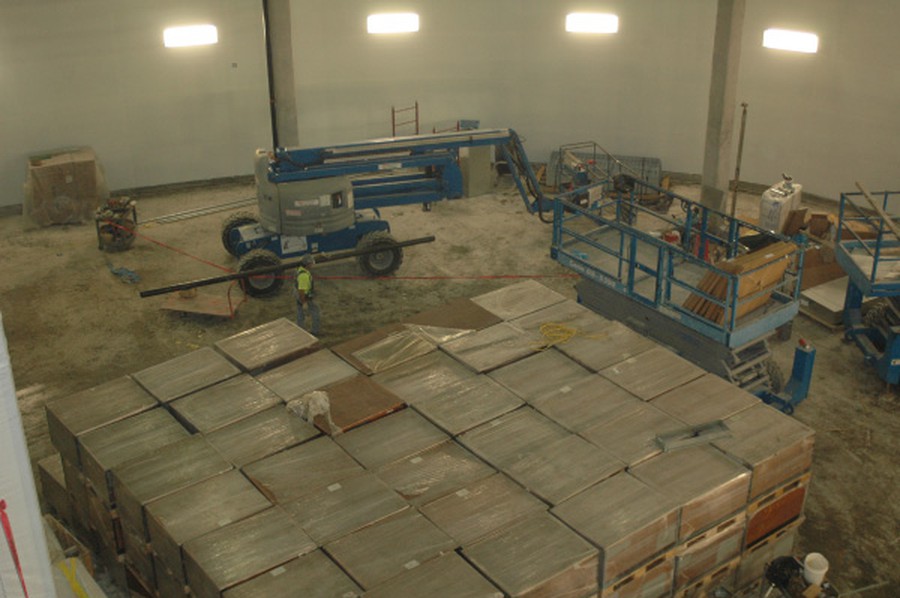 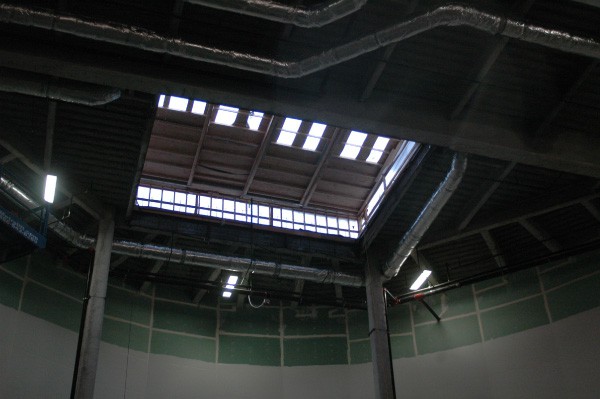 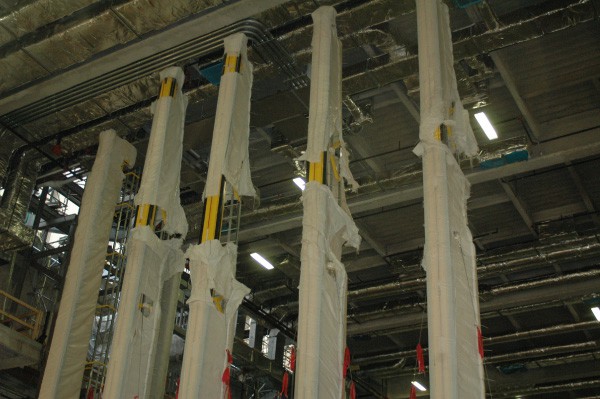 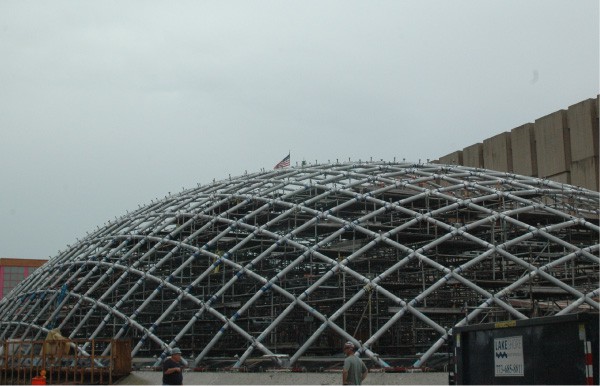 Once the Mansueto Library is completed—in spring 2011, if plans proceed apace—it will no doubt be among the world's most unusual research facilities, a novel combination of underground storage space and automated retrieval systems, all situated beneath a translucent, half-dome reading room.

Mike Natarus, Facilities Services' Senior Project Manager for the Mansueto, and Judith Nadler, the Director of the University Library, recently opened the construction site to a group of local media for a first hand over (and under) view of the great glass egg, the reading and research area within it, and the wide open space below. Here's a taste of the tour.

Nadler expects that the finished product will be a model for leading academic libraries here and abroad, but for now, the Mansueto is a tangle of curved crossbeams and scaffolding above the surface and, invisible to passersby, a cavernous five-story substructure below, which will hold nearly fourth-fifths as many volumes (3.5 million) as the Reg itself (about 4.4 million).

For the time being, the underground portion of the Library is accessible by two staircases along its eastern and western walls. Eventually maintenance workers and others making the descent will do so in a glass elevator, but such niceties are still months from being ready; during last Wednesday's tour, only the outer beams of the elevator shaft were in place.

Until the books arrive next year, the main attractions of the underground space are the five fifty-foot yellow cranes that will pick out patrons' requested materials and deliver them to the surface. The cranes, which are still mostly wrapped in plastic, will roll along parallel tracks of rails to reach the necessary bin or rack of books.

The distinction between bins and racks is an important one at the Mansueto. Most of the books stored there will be sorted by size into 2-foot by 4-foot bins, and when a book is requested, the cranes will bring its entire bin up to the circulation desk, where a library staffer will pull out the specific item.

Such containers wouldn't work as well for oversized or fragile materials, which will instead be kept on racks similar to normal library shelving. Whether a book is in a bin or a rack, Natarus said the turn around time from item request to checkout would be about five minutes, even at times of peak library traffic. (For a better sense of how the retrieval system works, see this animated video on the Mansueto project web site.)

The Mansueto won't be the first library or storage space to rely on mechanical retrieval of materials—Chicago State has a smaller automated set-up, and HK Systems, the company that built the Mansueto's cranes, designed the retrieval machines used in Amazon.com's warehouse—but it might be the first do so in such an unconventional environment.

"We're the first, to my knowledge, to be underground," Natarus said.

Going underground and automated has its advantages besides saving space. Light—natural or artificial—won't reach books in need of special preservation, and the temperature and humidity can be closely regulated.

Natarus said the storage space will be kept at 60-degrees Fahrenheit and 35 percent humidity, which a consultant hired for the project determined to be ideal conditions for books. If people worked regularly in the storage space—as is the case with some other retrieval systems, in which workers ride "cherry pickers" to reach materials—it would have to be both warmer and lighted.

Keeping humans happy is far more of a concern above ground, inside the glass dome which, stylish though it may be, bears a certain resemblance to a greenhouse and seems like it could be prone to uncomfortable swings in temperature.

To head off those problems, Natarus said, architect Helmut Jahn designed the dome with glass that is tinted and insulated, as well as coated with a fine ceramic layer, or "frit," which reflects a portion of incoming sunlight.

The 700 glass panels that will comprise the dome are all two-meter by two-meter rhombuses, though length and width vary from one panel to the next. The dome can be divided into four identical quadrants, and every panel has an exact replica in each of the other three quadrants.

Although Jahn's design is meant to appear smoothly contoured, the panels are themselves perfectly flat, which Natarus said was less expensive and more structurally sound than using curved glass. Workers are scheduled to begin installing the panels this August.

Following the tour, Nadler spoke with the assembled group about the Mansueto project. Asked about the new library's design, which is no small departure on a campus best known for parapets and gargoyles, Nadler said the library system as a whole was taking a something-for-everyone approach, and offering a variety of physical environments that would "allow a different experience throughout your working day."

Nadler also said she believes the quality of a library's physical space has become increasingly important, now that patrons can just as easily stay home and search for information.

But even if the Mansueto does add to users' experiences, it won't add much to staff numbers. Nadler described the required increase in library staff as "minimal," and Natarus said facilities staff would remain unchanged.