U of C student brings magic of folk music to Beijing 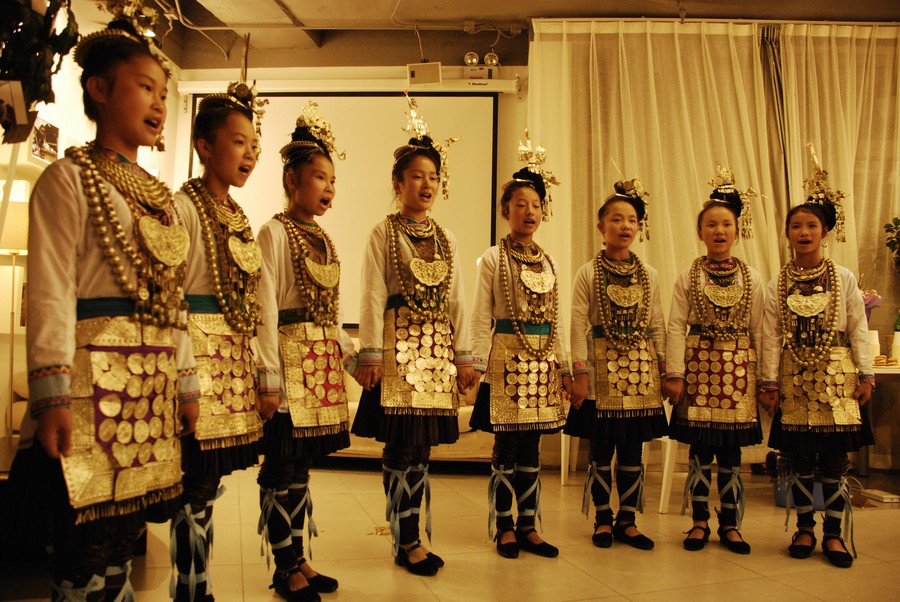 In 2009, Si Chen, a rising fourth-year at the U of C, took a year off and lived in Xiaohuang, a village in the Southeastern Guizhou province of China inhabited by the Dong ethnic group. She chose this village because of the Dong’s “Grand Songs,” folk songs meant to be sung by large groups of people. She was intrigued by how singing was interwoven into the social fabric of the village. As a teacher at the village’s elementary school, Chen built relationships with local children and their parents and took thousands of photographs of the village. She decided to host a salon at the One-Way-Street Library in Beijing on August 21 to share her fascinating experience living in the village.

In order to make the guests feel surrounded by the village’s culture, Chen decorated the wall with 16 large photographs taken during village weddings. She also used the trees in the room to hang many smaller pictures of the details of life in the village. In the evening’s climax, Chen further immersed her guests in the Dong culture by offering homemade rice wine from the village and by presenting eight of her former students to sing the Grand Songs. The Chicago Maroon spent some time with Chen to talk about the simplicity and magic of Dong living and why it was worth bringing to Beijing.

Chicago Maroon: You’re originally from China but have lived in Chicago for over three years. How different was the student life in China from that in the United States?

Si Chen: When I was in high school back in China, I felt like everything was set up for me...Like everyone else in China, I followed the path that everyone else was on. When I first came to Chicago, everything changed...I got full control of my life...And at that time I was shocked and lost, and did not know what to choose for myself. So I just followed the other Asian students majoring in Econ. It was painful, because I was walking in other people’s shoes, not my own. It was not until the spring of 2009 when I had a quick contact with the Grand Songs of the Dong ethnic group that I found my way and switched to East Asian Languages and Civilization.

CM: How did the Grand Songs of the Dong ethnic group suddenly help you find your way, and how did the little Dong village grasp your heart? I understand that you took a year off after the third year and lived with the villagers.

SC: I am the founder of a community service group called One to One Chinese Student Outreach. The first time I went to Xiaohuang was to build a library for a local elementary school with 500 books we bought with the funds raised on the U of C campus. On the opening of the library, all the students lined up on the playground and sang the Grand Songs for us.

The songs they sang did not follow any Western musical theory. They were inspired by nature. I have to say, that was the most beautiful sound I have ever heard. When the children started I was not able to feel anything but their singing. I was melted and merged into the harmony and the surrounding nature. After that, I decided to come back after I finished the junior year. Because I believe there’s magic in that little place, and I wanted to find out.

CM: Have you found the magic?

SC: Yes, I have. The magic that retained me and made me addicted was their lifestyle which was unbelievably simple. Living with the villagers for a year, I found singing to be the core of their society. The villagers start learning singing when they are toddlers. As they grow up, girls are assigned to different singing groups by their parents, and boys would form a singing group by themselves. Through singing, the young man and the young woman meet and fall in love. They get married and teach their toddlers to sing. Dong people sing their entire life. It’s really unbelievable if we think about their situation onto ourselves. Our life and interests are changing all the time. It is hard for us to stick to one thing since we are toddlers until death. But that’s the life of a Dong person. It’s magical to me.

SC: Well, it’s a remote country village far away in the mountains. It takes about 12 hours to drive from Guiyang, the capital city of Guizhou Province, to the village. The remoteness and the bad roads slowed down the economic development of the village. But on the other hand, thanks to these factors, we can still witness the magic today.

CM: So do you mean that once the road is constructed the magic will be gone?

SC: That could be a possibility. The Grand Songs of the Dong ethnic group have been classified as part of the Intangible Heritage of Humanity by UNESCO. I believe the government will offer some solutions for protecting the tradition, but what I mean is that their lifestyle will be changed. The simplicity in their life will be replaced by a new form of living. I don’t know what it’s going to be, maybe more like us?

Preserving a culture is not as simple as building a museum and then putting everything in it. It’s more important to preserve the lifestyle and the custom of those people, because culture is an expression of life. So once the way they live is changed, for example, if they started to be as busy as we do, they wouldn’t probably have time to sit down every night and sing the Grand Songs, and they would probably meet their partner through some other ways other than singing.

CM: Yes, indeed. So you brought the photos you took, eight of your students and homemade rice wine of Dong to the salon. What do you want to express through the salon?

SC: The salon is an art-in-action piece that I designed. The setting, like the photos on the walls, the lamps, and the tables and even on the plants, the rice wine, the girls in Dong costumes and their singing all are the fragments of Xiaohuang. It was like a three-dimensional collage when I put all the fragments together in this room. And when the guests came in and were surrounded by exotic cultural fragments, their reaction was what I was eager to see!

Besides, I wanted to inspire people to think about the difference in lifestyle between the village and the city. The Shanghai EXPO brought up the slogan “better city, better life, but is that true?”...When the city is crowded with people and traffic...or you feel suffocated by the air pollution, you would really wish to escape from the mess. However, on the other hand, when you have to use the crumbling toilet built with a couple of wooden boards, and every time you use it, you have to pray “don’t fall, don’t fall”. You will really miss flushing [the] toilet then. So it’s really a complicated thing. What I can do is just to offer people a space and time to think what they want.

CM: I noticed that you used “introduced your guests to the culture”. What does that mean?