Hot Doug’s is a lot of things. It is cold and far away. It is busy and expensive. 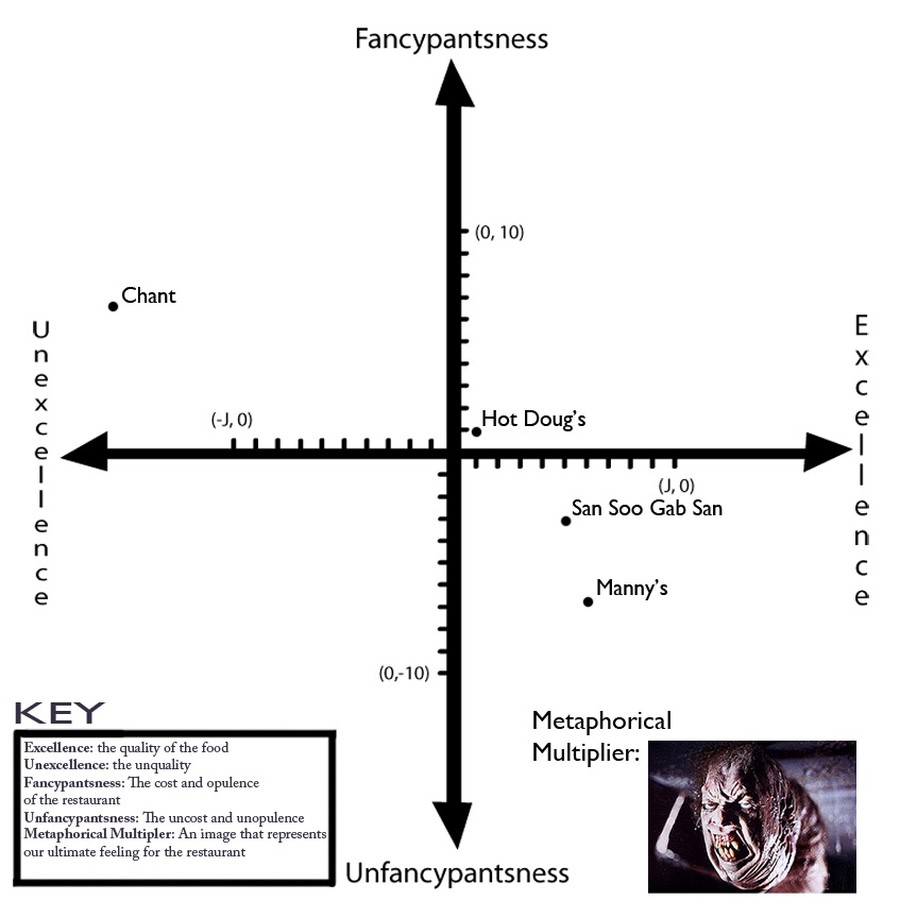 Hot Doug’s: A very popular and acclaimed restaurant in a northerly, westerly neighborhood of Chicago where bungalows and industrial parks abound like sunflowers in a subsidized tract of Italian farmland. Perhaps even more than food, standing is a big part of the Hot Doug’s experience—more precisely, standing in a frigid queue filled with other cold, encased-meat fiends. And this standing period goes on for a very long time.

Standing in line, we couldn’t help but recall that scene in John Carpenter’s The Thing (1982) where they’re all standing in the room and getting their blood tested. Indeed, it was just like that.

The day we went to Hot Doug’s, we decided to wear athletic socks and sneakers. Usually when we go to a restaurant, a decision like this has little to no impact on the experience. Sometimes people will complement our socks, other times not—and this is fine too. However, at Hot Doug’s the choice of footwear is just as important, if not more so, than the choice of meal. On weekends, you’ll be asked to stand outside of Hot Doug’s for about an hour, on weekdays it’s probably shorter. Either way, you’ll be made to wait. But is it worth it?

Chicago is famous for its encased meats. Hot Doug’s claims to be one of the inheritors of this hallowed tradition—but it’s not. It’s sort of like a Rain Forest Café in disguise. It’s like the Meat Forest Café. It’s also like a T.G.I.Friday’s, Ruby Tuesday, or Steak and Ale in that the walls are covered with numerous artifacts of Americana. Essentially, Hot Doug’s is like a really kitschy local meat museum, and their food is like the collectible spoons in the gift shop—it’s just whatever.

Maybe the best part about Hot Doug’s is ordering the food. The eponymous man himself mans the register and is friendly to you in an unabrasive avuncular sort of way. He’s enthusiastic about your choices and wants you to succeed. His eyes are big and wet, and they look at you as if to say, “Hey. I’m your tour guide through this unfortunate Forest of Meat. Let’s make the best of it.”

At this point, you’re still excited too. You’ve heard a lot about this place, and you’ve also been standing in the goddamn cold for forever. After the wait, the option of food is, well, truly exciting. Especially when it’s things like “French Fries, fried in Duck Fat” or $8.00 opuses like “The Mountain Man” (a sausage filled with antelope, among other things).

But after the Wet-Eyed man concludes your tour through the preserve he holds in everlasting stewardship, the fun ends. “And that will be AN INORDINATE AMOUNT OF MONEY FOR PROCESSED MEAT, gentlemen,” he says. But his eyes say, “I’m so sorry.” Yet you tell yourself it’s all worth it. It’s all worth it…

But it’s not. Not at all. The food is fine. Eating antelope, wow that’s cool. It’s a lot like how team handball is cool. But then you watch team handball,  so not cool. It's even less cool when you try to eat the ball.

And then there’s those duck-fat fries. To our mind, they’re sort of like putting a HEMI in a pickup that already has enough torque to power an 8-piston diesel engine—certainly enough power to tow a medium-size snowmobile (or “winter waverunner”). And that’s all we have to say about those duck-fat fries.

Let’s get to the long and the short: Hot Doug’s is fine, it’s just in no way worth it. There are dozens of places to buy encased meats in Chicago. Many of them are far better, and all of them are far, far cheaper. You’re not paying for any additional quality at Hot Doug’s, you’re paying for one part novelty, one part reputation, one part Doug. Try places like Bobak’s or Winston’s if you want to taste some highly suggestive, cheap, and delicious meat products.

So, in conclusion, Hot Doug’s is a lot of things. It is cold and far away. It is busy and expensive. It is like playing team beach volleyball in the National Park of Meat with John Carpenter, director of Universal Studios’ 1982 motion picture The Thing. But is it worth it? No. Not really. Not really at all.