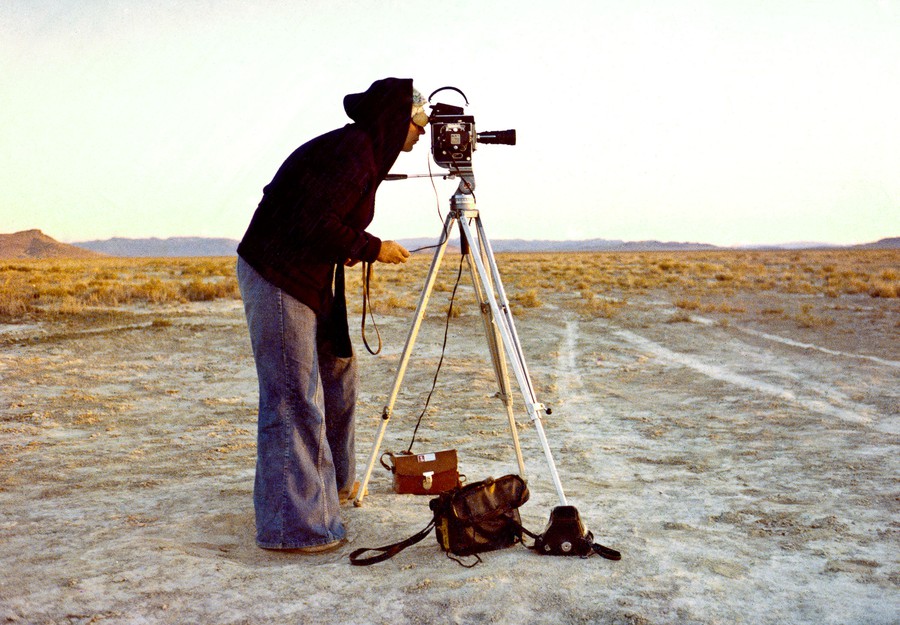 Nancy Holt’s exhibit Sightlines, on display at the Graham Foundation, is comprised of a constructed and layered set of artistic works ranging from photography to films to poetry, detailing the history and thinking of a remarkable woman. Holt’s work examines such fundamental and confounding concepts as the relationship between man and nature, the history of the earth, the function of light, and the role of the viewer in art.

The exhibit sets up Holt’s work in a very specific way, creating a more interactive experience for the audience. The wide and spacious first floor of the Graham Foundation’s Madlener House displays Holt’s early explorations of nature and landscapes, created as she travelled through America. Spaced around the clean white walls of the rooms are black-framed photos and canvas prints, some in color, some in black and white; the shots show flat, sandy land punctuated by empty human constructions. As one gallery panel reads, this early series shows the root of Holt’s interests–in the natural landscape and human intervention within it. One glass box contains Holt’s excursions into the field of concrete poetry. The media range from graph-paper to typewritten text, and the words, placed in forms and figures, are referred to as “visual metaphors.”

Holt’s photographic style becomes more mature and definite as the exhibit progresses, and her work moves away from simple traveller snapshots of the landscape. One grouping shot in Montana features industrial steel pipes and the landscape seen through them, inverting nature within a man-made construction. Another glass case shows the type of cameras Holt used and explains her work with earthworks and land art. One of Holt’s major land works, “Sun Tunnels,” is represented in a series of photographs depicting an arrangement of concrete pipes in the desert, designed to capture the sun at different times of the year in a manner reminiscent of Stonehenge. The structure includes an altar that lights up on the solstice; the construction is impressive and imposing.

The exhibit also includes Holt’s venture into film, and a film on the construction of the massive “Sun Tunnels” complements the photographs of the work itself. The old, grainy quality of the film adds to the sense of hard labor and basic earth evoked by the original piece. Other films emphasize Holt’s collaboration with earthwork artist Robert Smithson. Holt utilized color, sound, readings, photos, and video recordings to document the making of the films Mono Lake and Swamp.

A new bend in the gallery reveals a fresh twist in Holt’s perspective. Instead of focusing on the outdoors, Holt moves inside, showing a newly developed interest in the play of light and shadow. She also concentrates on urban architecture and the difference between interior and exterior spaces, playing with the viewer’s perspective of visual space.

Holt also delves into the human mind. One set of photographs shows the blur of moving human bodies on a sports field. Another, made after the death of Holt’s aunt, incorporates some intimate possessions of the deceased. An accompanying film features Holt reading her aunt’s letters aloud as photographs of her belongings flash across the screen.

Holt’s work continues down an introspective path as the exhibit reaches its natural end. Holt’s poetry, some of which are blank crossword forms that she allows the reader to fill in, analyzes the relationship between the viewer and the work of art. Reaching the end of the exhibit, Sightlines leaves the viewer with a sense of the discrepancy between the wide open natural earth on the first floor and the more cramped and inward-facing work upstairs. Like the viewer’s winding passage through the exhibit, Holt’s work is full of growth, both natural and created.