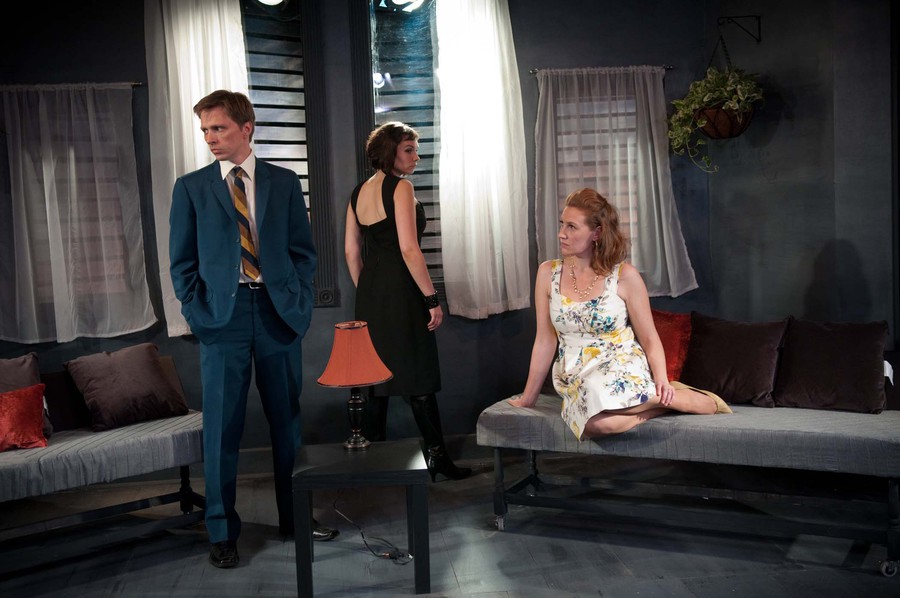 A swelling, pulsating sound of static, reminiscent of ocean waves, erupts from silence as the lights fade. The sound builds to an unbearable crescendo, then cuts off instantly just as an eerie fluorescent light harshly illuminates a man and two women sitting in a drab living room, in the center of which sit three glasses and a bottle of brandy. “Dark,” says one of the women, while the other stands with her face to wall.

This striking beginning is the opening to Strawdog Theatre’s production of Old Times, a play by Harold Pinter that explores the surreal nature of memory through two characters who reunite with a figment from their past. Though the harsh lights fade, leaving us with husband and wife Deeley (John Henry Roberts) and Kate (Abigail Boucher) preparing a dinner for Kate’s long lost friend Anna (Michaela Petro), we’re left with the same eerie feeling created by the opening music, and although the setting is superficially conventional, a dream-like quality pervades the scene.

But whose dream is it? Kate seems to know nothing about her old friend or of their London youth, while it’s apparent that Deeley fosters a strange hostility towards this mysterious character. When Anna finally appears, she seems to hold a strange, seductive power over Kate and both Anna and Deeley struggle to reclaim Kate’s past as their own. Kate is enigmatically laconic during the evening, and occasionally seems to have been won by one character or the other. She sometimes reminds Anna of their shared past, as Deeley observes, desperately struggling to bring her back into what we can only assume is the present. As the evening drags on and the brandy disappears, Deeley and Anna’s memories are explored and re-imagined, leading to increasingly emotional and hostile interactions between the two, a struggle to claim sexual ownership over Kate, and delving more and more into non-reality. The memory they construct is finally shattered by a phrase that Kate utters to Anna: “I remember you dead.”

This is a play written on actors’ faces—only a modicum of deeper meaning can be gauged through the text, which is why the masterful direction of Kimberly Senior and the powerful subtlety of the actors’ performances so obviously shine through in this production. Whether Kate, Anna, and Deeley are making small talk or having dramatic revelations, the plot is truly transmitted through their expressions. Anna switches from jealousy to joy in a moment; Deeley’s disgust for and attraction to Anna are intertwined. Kate passively avoids eye contact, yet her expression reveals whatever emotion in the room is most prevalent, and at the very end, she delivers a beautiful and morbid monologue with an austere clarity, pushing truth to the point of tortuous cruelty. Every expression and movement is wonderfully choreographed so that when watching this play, one’s gaze must dart rapidly across each actor’s face in order not to miss a thing. The tension created builds from one in which nervous chuckles are forced from the audience to one so intense that everyone watching seems to be holding their breath. The characters are born before our eyes as they uncover their own memories, and discover their own feelings as the fight to define their shared past continues until its breaking point.

For some, Old Times might be too obtuse, for others it might seem brilliant, but for all audiences, this is the kind of play and the kind of production that won’t let you blink—its reality presses onto you so that the most disturbing part of the play may be the moment when the lights turn back on and you find three people gone, and three actors standing before you.