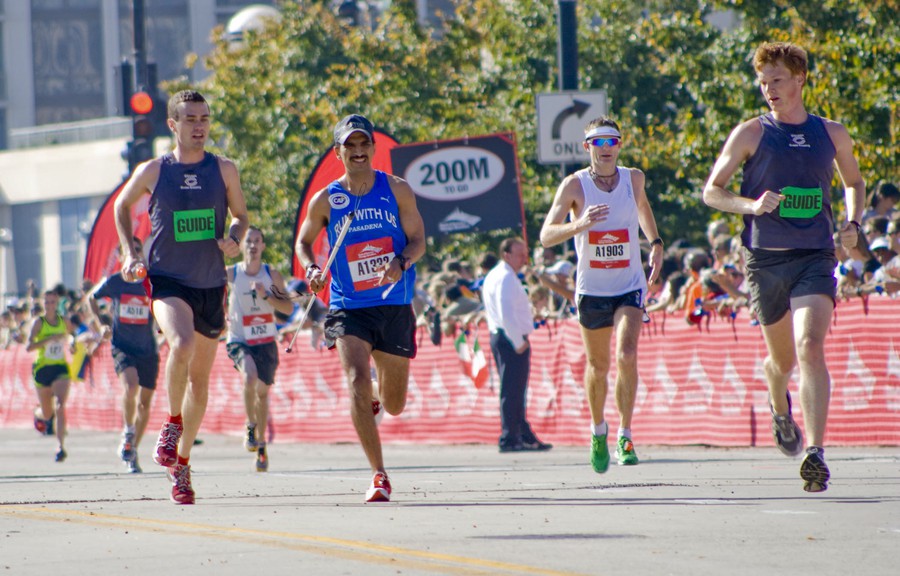 Adrian Broca can’t see where he runs, but that doesn’t stop him. He has run 26 miles and 385 yards 28 times in his life without being able to see the asphalt beneath his feet, but with every step he forgets his impairment and forgets his blindness.

On Sunday, October 9, Broca ran the 28th marathon of his career and his first Chicago Marathon.

For the 34 old running his first race in the Windy City, it was also a chance to realize his dream, by crossing the finish line before the stopwatch struck 2 hours and 46 minutes, a time that would grant him a spot as a runner for the United States Paralympic national team.

Broca can’t run alone to make this time, however. To run his best races Broca needs other runners to guide him through the ever-swaying herd of thousands of marathon runners.

Only able to see color-contrasting blurs and vague shadows, Broca doesn’t see faces and has difficulty making distinctions between different shades. Broca can merely make out the black of the road from the gray of the curb. This is more than enough for the relentless marathoner, but in a crowd of thousands of stampeding feet, not seeing can be deadly. For Broca there is no fear to be had and no restrictions to what he can do.

A resident of Los Angeles, California, Broca did not know any runners from Chicago coming into this past week. He had one guide, but was unsure of the guide’s ability to hold pace for the duration of the race. His dream would be risked.

So Broca made a bold move and reached out to strangers for help. Broca contacted Coach Hall and the University of Chicago men’s cross country team, in hopes that within the Maroon roster he would find the guides he needed to run the race he knew he was capable of running.

The men’s cross-country team came running to Broca’s side and gave the blind marathoner the eyes he needed to compete for his dream. Before the Olympic aspirations and the elite times, however, there were struggles and depression.

Broca wasn’t always blind. An immigrant from Mexico, Broca came to the United States at a young age and with healthy vision. His family came to the country for opportunities and with hope.

At age 18, as a senior in high school, Broca began losing his vision to a hereditary condition that damaged his optic nerve. He was not an avid runner before he began going blind, but as his sight began to fade so did many of his other ambitions. He joined programs to help with his disability, but depression consumed him.

His young brother, a member of the high school cross-country team, imagined a release for his brother and offered him a proposal: an invitation to run by his side and to race for his high school. Broca did not pass up the chance.

“Cross country gave me something to deal with my depression. It was great. I felt like a part of a team and like I was accomplishing something, but after I lost most of my vision over the next couple of months, I had to quit the cross country team,” Broca said.

In high school, Broca didn’t run with guides. He would run on his own which often led to losing his place in cross-country courses, which are not as straightforward as those found in marathons. The frustration and difficulties forced Broca to stop and without the glimmer of hope that running had given him, life came at the teenager in full force.

“Then it really hit me. I became suicidal. I began to feel life wasn’t worth living and that the hopes and dreams I had would never be accomplished,” Broca explained. Broca would struggle, but was able to graduate from high school. It would take time for him to learn to love life as he once did.

“Years went by and with the help of my family I slowly began realizing that if I was going to stick around I better change my attitude and start focusing more on the things I could still do, instead of everything I had lost,” Broca said.

Something Broca could still do was walk around his neighborhood. Step by step he began to see again, without sight. He began figuring out where it was and wasn’t okay to walk. He realized sidewalks were difficult because of all the obstacles.

“Maybe I can run on the curb,” he thought. He discovered that his limited vision did allow him to distinguish between the black of the street and the gray of the curb and that he could still make out vague objects like cars and trucks, which he learned to maneuver his way around. Gradually, Broca’s walking developed into a jog and from a jog he began to run. Broca’s family was still there, just as it always has been, and as would become commonplace throughout the years it was his family by his side.

By coincidence Broca’s younger sister was beginning to run cross country at her high school around the time Broca was rediscovering his step. The two ran together and Broca would train with the team.

“With her, I could still run around the neighborhood and get the feeling I had back when I was in high school,” Broca said. Cross country was still out of the question, however. The courses were too short, there were too many runners confined to small lanes, and there were simply too many turns. But one morning, everything changed.

“I was just watching TV one morning and I saw the LA Marathon. I saw there was space for people to run on, that there were plenty of people to follow, and that there probably weren’t that many turns. I thought, ‘That’s something I can do and train for.’ So the next year I trained,” Broca said.

Training was anything but easy. Broca maximized the little vision he had left and would run on his own. He says he is lucky because his neighborhood in California has a bike path, which he uses to run down a couple of main streets that he can safely follow. Broca vaguely distinguishes the white bicycle line against the black backdrop and uses his left foot to determine where the road ends and the trail begins.

“I’m able to run anywhere between 18 miles to 23 miles on my own for a normal weekly training run,” Broca said.

Unfortunately, even with a path and familiar streets, difficulties still arise. “Sometimes there are obstacles that may not have been there the day before. Sometimes they place cones on the road and I don’t see them. I end up tripping and falling. Other times people aren’t careful and open their car doors while I’m out there running, and I won’t have enough reaction time to avoid running into open doors,” Broca said.

“I have to be thankful to my wife for being there. Ever since we met, she’s trusted that I know what I’m doing, and even though she knows how dangerous it is for me to be out there running she understands that its something I have to do for myself and on my own,” Broca said.

Broca’s wife, Brenda, not only understands her husband’s running—she is also there to help him every step of the way.

“Any time I come home bruised up or with a battered forehead because I fell down or ran into something, she touches me up and picks me back up. It’s a team effort. We work together to accomplish this,” Broca said.

Brenda accompanies Broca to all of his races, including the one in Chicago, and is his biggest fan and supporter. The two apply for grants from foundations and are able to run most of their races through their aid. It is only appropriate that the aspect of life that saved Broca is also the avenue that introduced him to his wife. The two met training for the 2007 LA Marathon and married in December of 2009.

“Just as my family helped me with my depression and to stay out there running my wife has had just as important of a role helping me compete at an elite level now,” Broca said.