With literal fanfare, a musical tribute and a procession of academics accompanied Tuesday’s dedication of the Joe and Rika Mansueto Library in Harper Commons. 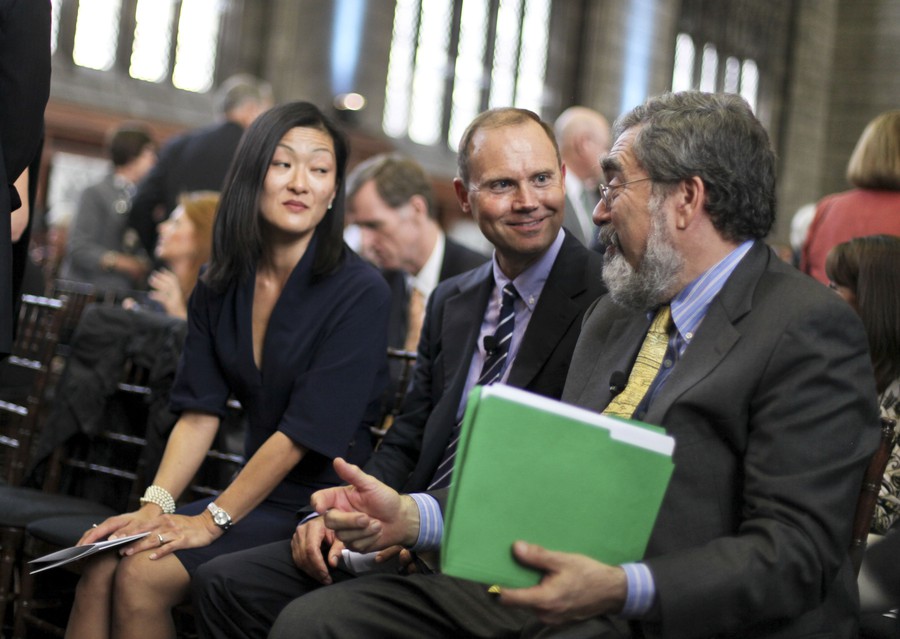 With literal fanfare, a musical tribute and a procession of academics accompanied Tuesday’s dedication of the Joe and Rika Mansueto Library in Harper Commons.

“We will not retreat from the actuality and reality of the library which has played such an important role in the development of knowledge, stewardship of history, and the education of generations,” Zimmer said in his speech, recalling a small library he visited as a child that displayed a sign reading, “This is a library: Feel free.”

Alums Joe Mansueto (A.B. ’78, M.B.A. ’80) and his wife, Rika (A.B. ’91), the library’s namesakes and chief financiers, reflected on the periodically uncertain vision behind the library.

“It was not a safe choice, it was not a conventional choice,” Joe Mansueto said. The founder and C.E.O. of the investment research company Morningstar, Inc., Mansueto also praised architect Helmut Jahn for the building’s “simplicity, boldness, and originality.”

Jahn had the library built atop a 50-foot-deep automated retrieval system with a total capacity of 3.5 million volumes, after the University’s growing collection of books prompted Zimmer to approach the Mansuetos about expanding the library system over four years ago.

“We did it the Chicago way: thoughtfully, carefully, deliberately, and with much research—not persuaded by the doubts of others,” Director of the University Library Judith Nadler said in her opening remarks.

Mansueto was pleased to see how the library has become a part of daily student life—particularly that of students in sororities and fraternities. “A recent alum sent me a link to a Facebook page entitled ‘Thetas love Mansueto’; I was only vaguely aware [then] that there was a sorority on campus,” he said.

Keynote speaker Anthony Grafton (A.B. ’71, A.M. ’72, Ph.D. ’75), the Henry Putnam University Professor of History at Princeton University, singled out the Mansueto as a symbol of the University’s bibliophilia.

“Surely, there can be no university libraries that can be the focus of so much thought and passion, and so much affection [as the U of C’s],” Grafton said.

Mary Nell Murphy, an analyst for IT Services, described the evening’s remarks as “educational and entertaining.”

“It’s a beautiful building that I enjoy going into just as a community member,” she said. “It’s wonderful to see all the enthusiasm from the students and the community.”

Not all the dedication’s attendees spoke of the aesthetics of the Grand Reading Room or the state of modern libraries, however. Reflecting on the student “hijinks” that have befallen the building, Grafton took a moment for irreverence.

“The dome of the Mansueto no sooner takes on a beautiful icing of snow during the first days of winter than it is graced with what the students call…butt tracks,” he said.