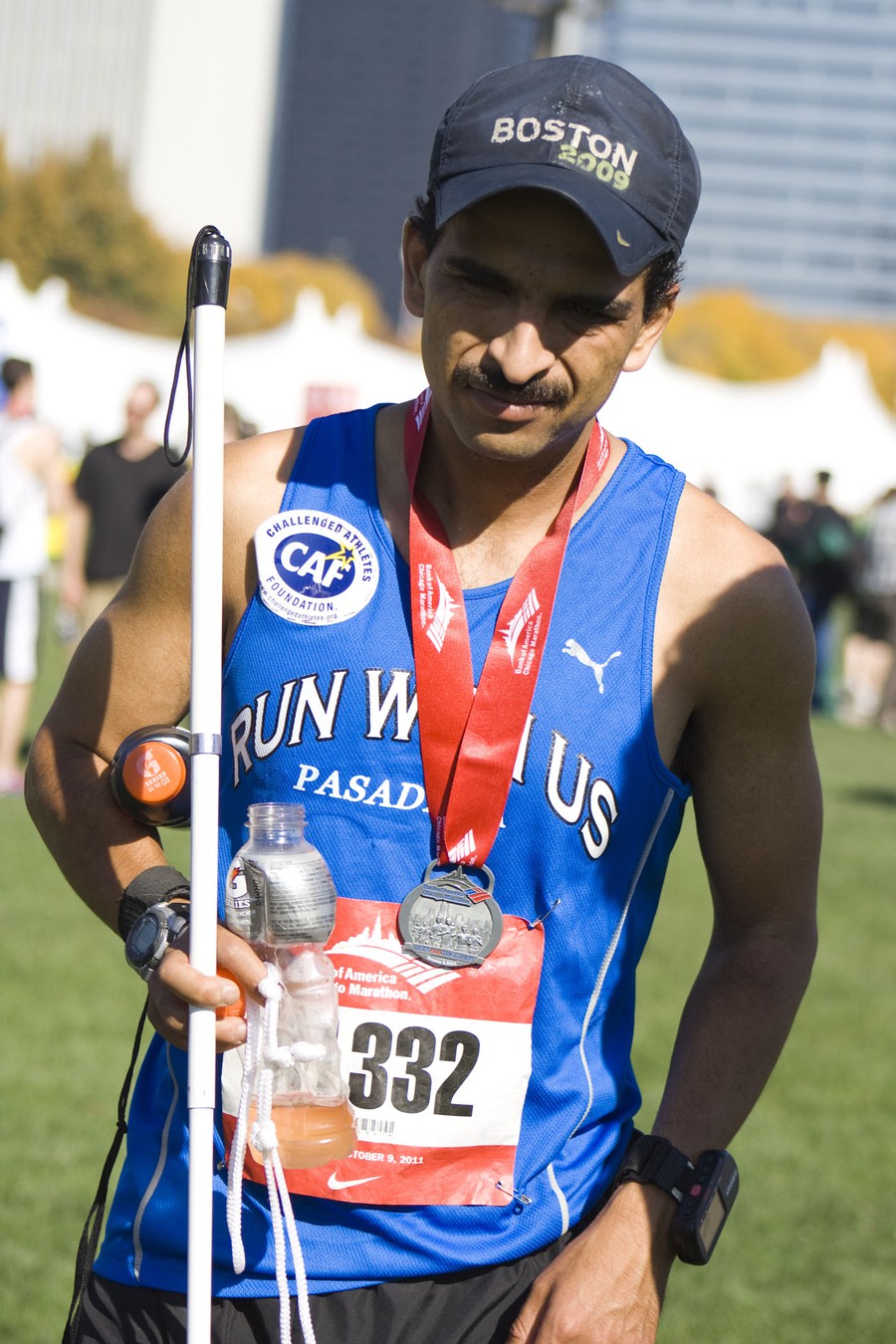 After months of tireless training, months of falling and getting back up, and months of bumps and cuts, Broca was ready to run farther than he ever had, all while being unable to see the road before him.

In a pack of 10,000 runners, Broca disappears into the crowd. He has a runner’s physique and may appear a bit more collected than his fellow competitors, and you wouldn’t notice anything different about him at first glance. Running blind while enveloped by a herd of men and women down a path you can’t see is an impossibly extraordinary feat in itself. Doing it at a top speed is nothing short of surreal. For Broca’s first marathon, he did not use a guide.

He finished with a time of three hours and forty-two minutes, a blazing speed for any first-time marathon runner, and much more so for someone who had minutes shaved off because he had to find his way through the crowd and the course.

“After that, I realized I had more potential, and I drove my training up,” Broca said.

As time passed, Broca began to see that he would need some help to truly become the best runner he could be.

“I kept doing better, but I would need to ask people for help and I didn’t want to interfere,” said Broca. His personal record while running marathons entirely on his own was three hours and seventeen minutes. The challenge of racing a little over 26 miles solely off of other runners’ shadows and the sounds of the crowd was one thing that was affecting his runs.

“I was running into barricades because I wouldn’t know that the course was turning, so I would keep on going straight and I would run into people. I felt like if I kept doing things that way I would be setting myself up for failure,” Broca told.

With all the self-worth that carries Broca into the unknown streets and through the challenges in his life, he was not too proud to take a leap of humility and reach out to those around him for help. He joined running organizations and contacted runners in the areas he was racing. Some responded and some didn’t, but once word got out about Broca’s story through local media outlets, there were those who reached out to Broca about wanting be a part of his pursuit. There were also those to whom Broca was an inspiration, proving to others through example that visual impairment doesn’t have to be a barrier to running.

He consistently runs the 26 mile marathon length at a 6:30 pace and an average time of around two hours and fifty minutes. He is one of two visually impaired runners who consistently breaks the three-hour mark for marathons, and among the competition as a whole tests out as one of the finest, finishing in the top 500 in races as big as the Boston Marathon.

The real benchmark for Broca, however, is two hours and forty-five minutes. That is the time he needs to run for a spot on the U.S. Paralympic team, and that is the time that led him to travel across the country to Chicago.

A big part of making that time is having guides that can keep up and who are willing to work with Broca.

“A week ago I only had one runner who was actually trying to run the race himself and we were trying to stay with each other, but we were seeing differences in each other’s pace. We hadn’t had any other success finding guides through a local friend,” said Broca.

Broca researched when he arrived in the city and looked up the times of local running teams and organizations. The men’s cross-country team, ranked 16th in the nation, seemed like a perfect match.

“It was kind of a Hail Mary. I looked up the cross-country team on the University of Chicago website and found out about Coach Hall and the amazing program he was running locally. I knew I didn’t have any connection to be reaching out to the team, but I wanted to reach out to everyone I could so I e-mailed them and called them first thing Monday morning,” Broca said.

Coach Hall and the team welcomed the opportunity with ready feet and open arms.

“Adrian e-mailed our coach saying that he was hoping to find some people to guide him through the marathon at a 6:30 pace, and traditionally as a team we’ll long run in the marathon, so it was something we would have been doing anyway, except we got to help out Adrian,” said third-year Isaac Dalke, who guided Broca through the first half of the race.

This is one of the few times Broca has received help from a college team in a marathon. The Brocas have reached out to several cross-country teams across the nation in the past, but surprisingly rarely receive a response, which leaves Broca in a tough spot with no guides.

For the Maroons, though, this was an opportunity that they readily welcomed, and for Adrian it was the right fit because he would have a team of four guides who could guide him at his proper speed. Most of the runners on the team quickly responded to Coach Hall’s invitations and a schedule was set for Broca’s four guides and when they would jump into the race.

“When we can, we like to give back and help out others. For us, running is so important that we are always wanting to help those who share similar goals and aspirations,” said third-year Wyatt Jones, who also ran with Broca for the first half of the marathon.

The Brocas, enthused and appreciative of the support they were receiving, came by the UChicago track the day before the race and met the team members after they had run their workout.

“They were so happy to have so many people that volunteered,” Jones said.

“We got that much more confident from seeing the workout and how strong the team was. I knew we had found the right match and that we were going to do well the next day. We were really moved and touched by everyone’s generosity and selflessness,” Broca said.

The partnership was mutually beneficial, which is something that really relieved Broca, who never wants to be a burden to others. For the Maroons, continuing at Broca’s pace would help them stay steady for their own times throughout the marathon and not burn out.

Broca was allowed two guides at a time throughout the race and decided on having one exchange.

The runners who led him for the first 13 miles were Dalke and Jones. The last half was run with fourth-years Brian Schlick and Brian Wille.

The guiding process itself is relatively simple. Broka grips a tether in his right hand, the other end of which is held by his guide who leads him at certain points throughout the course.

Moreso than the tether, communication is key. Broca’s guides inform him of his surroundings and of when to turn. They also provide encouragement.

“We generally had two people on either side of him, and if it was a sharp right hand turn he would extend his hand and he had a tether on it so we would guide him around. A lot of it was verbal, like ‘Right, right, right.’ If there was something coming up in the course we would cue him in beforehand. We also ran in front of him so he could follow our shadows. The whole process went really smoothly,” Jones said.

“We wanted to make sure Adrian was as comfortable as possible,” Dalke added.

Broca was thankful for every bit of help he received.

“Every time we went around a corner he would reach out and we would lead him and every time he would thank us, every single time. I mean, that’s exactly what we were there to do, but that’s the sort of person he is,” Wille said.

Broca could also be seen thanking those around him that would cheer him on as they, or more likely, he, passed by.

Heading into the race, nerves ran high for all participants.

“I was incredibly nervous. I was worried that we would mess up the pace or run into a problem with guiding. Being responsible with helping someone else is a totally different experience. I couldn’t sleep at first and I was worried I wouldn’t wake up to my alarm, so that when I woke up at 3:50 a.m. to go to the bathroom and [I thought]–you know what, I’ll just stay up,” Jones said.

Broca kept a visibly cool head the entire length, even when he found out that this race wouldn’t be quite the same as the other marathons he has run in.

Broca actually led the Chicago Marathon for the first four miles of the race. They gave those competing with certain impairments a 10-minute head start to avoid the problems that come with maneuvering through a crowd you can’t see. “We were literally the first runners on the course and were the fastest runners out, so we actually led the marathon,” Dalke said.

At the gun’s fire Broca is different. He is no longer impaired and no longer disabled. He, like every one of the thousands in the crowd, is there to cross the finish line.

“When I get out there I put my cane away and feel like there’s no limit to what I can do,” said Broca.

The experience was a first for Broca and one that added a little more fuel to his fire of competing in the Paralympics.

“It was awesome because I had never really had that opportunity. It was also really cool to have all those people cheering for you at the head of the pack. I loved every minute of it and it gave a taste of what a Paralympic experience would be,” Broca said.

Eventually Broca and the others were caught, but not by just anyone. The people passing Broca, Jones, and Dalke were some of the top runners in the world.

Cheers were constant and persistent throughout the race, but there were certain moments where the crowd exploded a bit more for Broca.

“When we ran through Pilson, people knew Broca was Mexican-American and we would hear some cheers for him in Spanish. It was pretty cool,” said Schlick.

The race’s biggest moment, however, came in Broca’s final steps, when he finally crossed the finish line.

Despite running the races with his cane put away, Broca always brings it out for the marathon’s final moments.

“As soon as he got closer to the finish line, more and more people began lining the sides. As we drew near, Adrian extended his cane and raised it in the air. The cheers were audibly louder as he finished. Everyone was being as loud as they could. It was really amazing,” Wille recalled.

Broca raises his cane for a reason. Despite the freedom running gives him and the struggles he faced in his youth due to his vision, his blindness is something he is not afraid of. Instead it is something he now uses to help others.

“No matter what time we have run on that day it is more about the victory over my own frustrations and disappointments and knowing that I have overcome everything since losing my sight,” Broca said. It lets people know that I’m not ashamed of being visually impaired and I hope it sets an example...”