For Steppenwolf, home isn't where the heart is 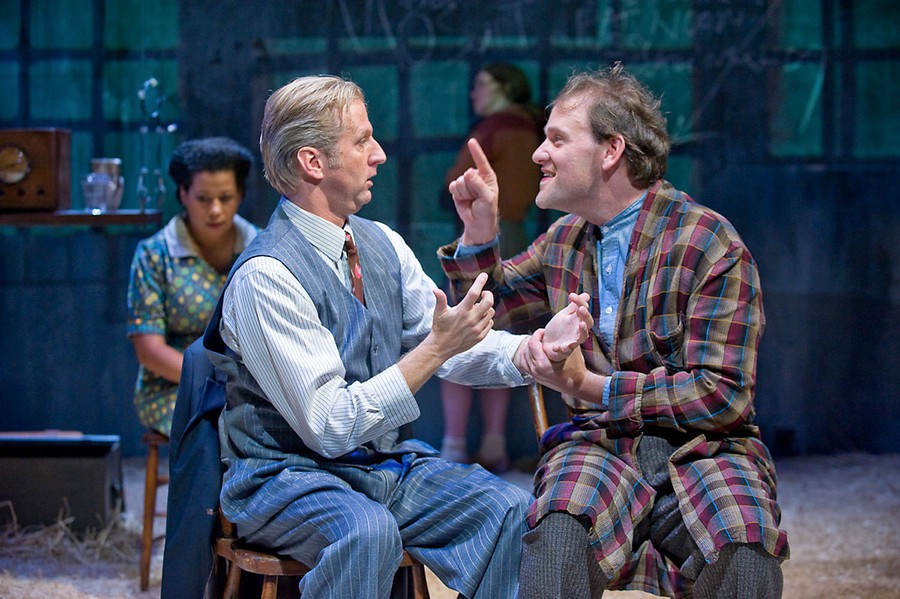 I’m starting to realize just how vulnerable actors are when performing in ensemble shows. Dialogue gives you a glimpse of individual characters, but the hardest work happens between the lines. Beyond embodying their characters, actors also need to characterize a community: a living space that stands in the place of a protagonist. The Heart is a Lonely Hunter is, for better and worse, a perfect example of the unique demands required of such an ensemble show. Steppenwolf’s production, adapted from the 1940 Carson McCullers novel, focuses on a small town in the Jim Crow South, fraught with politics, personal tragedies, and overwhelming, insatiable desires. The telltale signs of individual suffering and triumph are out in the open before long. However, except in very brief moments, the true, collective character of this community never quite develops.

This is not to say that the actors botched their performances—quite the contrary. Questionable southern accents aside (the story is set in Georgia but the voice work always seemed to splash around in the shallower end of the Deep South), the actors craft their individual characters well. John Singer (Robert Schleifer), a well-dressed deaf man who pretends to be a deaf-mute, has the demeanor of a patient, sensitive missionary, selflessly serving the world. He becomes an advisor and witness to several of the other townspeople, beginning with the whimsical Mick Kelly (Jessica Honor Carleton), a naïve teenage girl who invents symphonies in her head.

Mick chats volubly with Mr. Singer while hunting for murmurs of “Motsart” on radio sets and navigating the treacheries of puberty. Mr. Singer’s practiced lip-reading hangs tenuously between blessing and curse in these extended heart-to-heart conversations. The same ambiguity goes for Mr. Singer’s relationship with Jake Blount (Loren Lazerine), a would-be labor organizer who is often too drunk to do much more than get himself into trouble. Often Mick and Blount find genuine solace in airing their woes with Mr. Singer, but sometimes Mr. Singer can seem like little more than a sounding board whose primary attraction is his virtual silence.

The ensemble briefly shines when tackling the problem of communication that falls short of connection. McCuller’s story calls to mind the monumental tragedies that occur in the novels of William Faulkner—that other Southern author whose characters talk and talk without getting anywhere. And again, like in Faulkner (at both his best and worst), another failure to communicate is due to racial difference. The Kellys’ housekeeper, Portia (Ann Joseph), has some motherly fondness for Mick, but also hints at the intolerability of living under the regime of white supremacy. In contrast, Portia’s father, the strict and severe Dr. Copeland (Walter Coppage), harbors a consuming passion for political resistance that is, tragically, a generation too early for mass protests or marches on Washington.

As this narrative thread, among many others, thins out along the way to its conclusion, the big problem with the play becomes apparent. Again, it’s the nature of the ensemble: There’s not one, but five or six very disparate stories that need to be wrapped up. If it seems like the complexity of racial difference in the South is identified too narrowly through Dr. Copeland’s monomania, it’s not because the play marginalizes the lives of its black characters. Rather, it’s that the plot cannot make up for the work the ensemble should be doing.

What’s missing? How can actors be performing well and still not be doing something right? While each character is skillfully performed, the wide, sweeping plot means that individual narrative lines have already taken a backseat to a broader picture of the community. However, it’s almost as if each actor is far too focused on characterizing their individuality to characterize the space they live in. Dr. Copeland is pretty much always stiff and irritable and Blount is often unpredictable and abrasive. There are exceptions, of course. Distinct relationships between characters certainly exist, but such distinctions are only noticeable in explosive moments, dictated by plot, that require highly visible outbursts rather than subtle changes in behavior.

This fundamental problem is encapsulated nicely by the poor decision to have actors absent from a given scene pose throughout the stage like contemplative statues, often with their backs turned to the audience. As a result of this staging, the viewer is effectively forbidden from imagining what the characters are doing when they are not directly participating in the narrative because, well, there they are, right in front of us, trapped in their private and brooding silence. In other words, don’t bother thinking about the larger community outside of the unfolding scene. Your eyes are already telling you that it’s as stiff as a corpse.