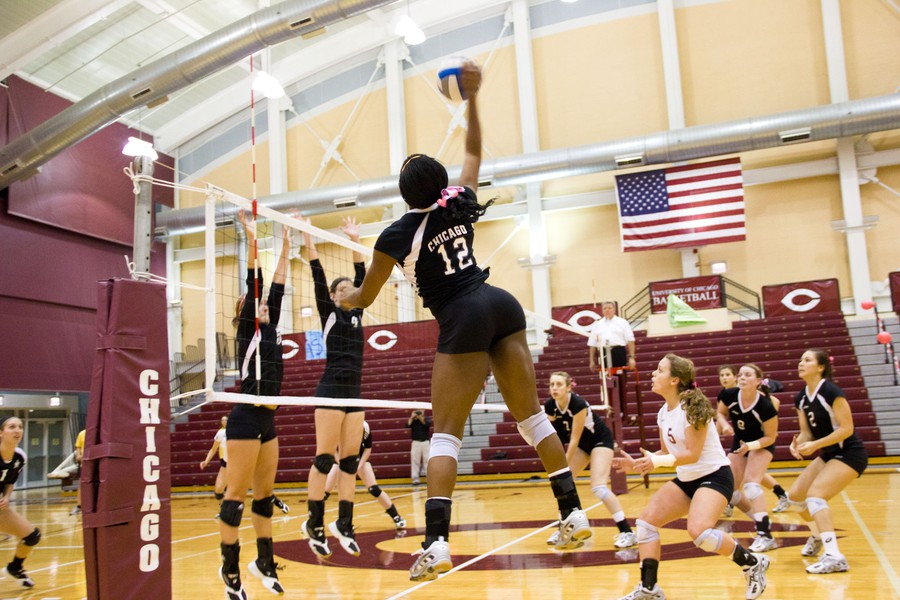 Chicago left everything on the court, including some skin, in a close win against Dominican on Wednesday that lasted five games and nearly two-and-a-half hours. “This was certainly a different Dominican than we’ve ever seen before,” said Head Coach Vanessa Walby after both teams shook hands. “It was a long fight and they put up some great competition.”

The Maroons sandwiched two winning games between two losses before rallying in the fifth to end the match 3–2. The first game set the tone for the rest of the night as both teams traded blows, never letting the other slip more than a few points ahead. Though Chicago ultimately gave in at 24–26, the Maroons caught a second wind to win the next two 25–24 and 25–12. Dominican squeezed out a 22–25 win in the fourth despite the valiant efforts of fourth-year Colleen Belak who, during a 45-second rally, crossed over to the opposite side of the net to hit a ball back to her teammates and ultimately clinch the point. With all the Chicago fans on their feet, fourth-year Isis Smalls ended game five at 15–13 with a kill that prompted some Chicago fans to ask the Dominican contigent if they “need[ed] some Isis for that burn.”

That final smack of volleyball on wood marked win 101 for Walby as she celebrated her 100th career win this past Sunday, October 16, against Carnegie Mellon. “I will be honest and say that I was oblivious that it was my 100th win,” Walby said. “I pay attention to stats with the girls, but I could never tell you anything about records.”

The team, however, did not forget. Said Smalls, “We made her a jar with one hundred Reese’s inside decorated with the date and everything, so it was pretty important to us to win that game.”

As Walby heads into the triple digits, the question remains: Can Chicago keep the ball rolling – or, rather, flying–at the upcoming Elmhurst Invitational? The Maroons are slotted to face off against Simpson and Wheaton on Friday at 6 and 8 p.m. respectively, followed by UW-Platteville and Elmhurst at noon and 2 on Friday. Of the four, Smalls believes that Simpson should be the team’s least challenging opponent. As for the other three, Smalls said, “We have so much history with all of them. Platteville we’ve been neck- and-neck with all season. We just won against Wheaton a few weeks ago, and Elmhurst we beat earlier this season, though they’ve beaten quite a few top-25 teams recently.”

As the Maroons have already served, set, and blocked their way to an impressive 24–3 season, Walby hopes to keep the momentum up this weekend and go undefeated. “I think that it is extremely doable and would be a nice push going into our conference tournament.”