Face off with The Elephant Man 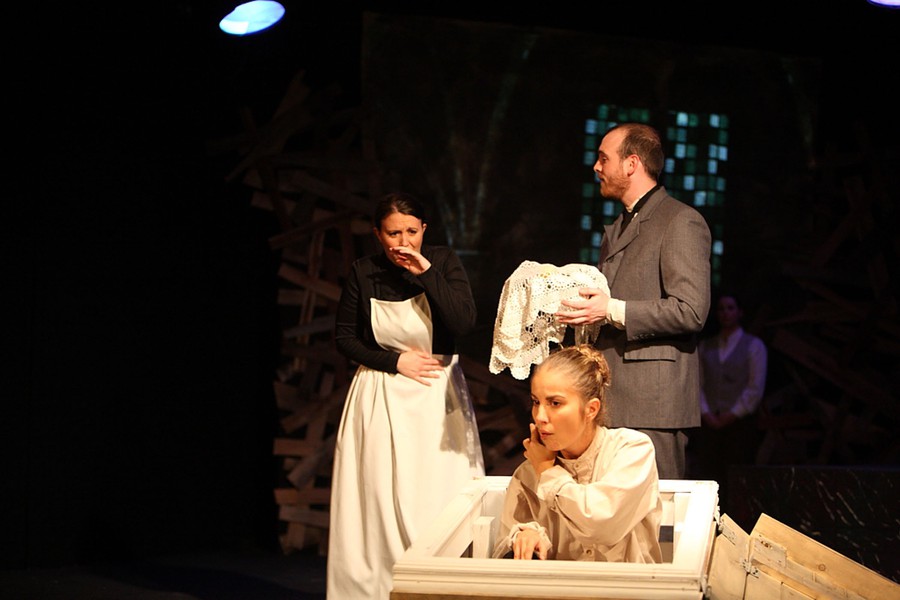 First produced on Broadway in 1979, The Elephant Man, set in Victorian England, is based on the life of Joseph Merrick, a man whose grotesque deformities became an object of fascination and disgust among all social classes. Unbeknownst to himself and his contemporaries, Merrick suffered from a severe genetic disorder. The premise of the play is Merrick’s claim that his condition came about after a circus elephant trampled his mother while she was pregnant with him.

For most of his life, Merrick, called John in the play, was a ward of the state. He was abandoned at an early age after his mother died and was forced to live in a workhouse throughout his teenage years. Act One of the play begins with Merrick (Simina Contras) as a young adult on display in London under the watch of his manager Ross (Jake Penzell). A prominent physician and lecturer from the London Hospital, Dr. Frederick Treves (Doug Werder), stumbles upon the spectacle. After paying to view Merrick, he decides to take Merrick back to the hospital for further study.

Treves studies Merrick further and then subsequently gives a lecture on his deformities to an intrigued audience. Merrick does not stay under Treves’ care and instead leaves with Ross for Brussels after they are chased out of London. Ross ultimately abandons Merrick and sends him back to London, where Treves admits him to the London Hospital. However, he encounters difficulty in finding a consistent caretaker for Merrick; he asks the resilient nurse Miss Sandwich (Rita Crowley) to help him with Merrick, only for her to gag and refuse the position upon seeing him.

The English people, both fascinated and repulsed by Merrick, generously raise funds to allow him a lifetime stay at the London hospital. Bishop Walsham (Jim Masini) also visits Merrick and decides to invest in his religious education.

With the goal of making Merrick as normal as possible, Treves sets guidelines and even hires actress Ms. Kendal (Julie Johnson) to help with the socialization process. She and Merrick bond over their mutual love of Romeo and Juliet. Act One ends with a tender scene in which they shake hands, the first time Merrick has ever shaken hands with a woman.

Act Two begins with Merrick as the center of attention amongst the rich and famous. Ironically, as he begins to rise within the social circle, his health begins to deteriorate. The relationship between Merrick and Ms. Kendal further develops, and Ms. Kendal even allows him to see her naked, before Treves walks in and sends her away.

Merrick’s moral and mental faculties are still intact, and he decides to spend his remaining time building a model of St. Philip’s Church, which stands outside of his window. He and Treves sharply disagree about faith, and Treves soon realizes he has been harsh by sending Ms. Kendal away.

The parallel structure of the play makes the focus equally shared between Merrick and Treves. In Act One, Merrick is on display for his physical deformities. In Act Two, Treves has a nightmare that Merrick is giving a lecture on his normality, ambition, and rigidity, claiming his principles have allowed him to treat others cruelly “for their own good.”

The play ends with an exasperated Treves asking Bishop Walsham for help coping with Merrick’s impending demise. Claiming Merrick’s faith is only yet another way for him to appear normal, he realizes his efforts to assist Merrick are futile because he will die soon. Merrick finally finishes his model and lays down to sleep, ultimately being suffocated by his swollen, massive head.

Those familiar with David Lynch’s movie adaptation of The Elephant Man would be surprised and delighted to see the notable differences found within the play itself. The most notable characteristic of Merrick was the lack of prosthetic make-up used to denote his inhuman appearance. Contras gave an excellent interpretation of Merrick, skillfully manipulating her face and contorting her body to give the appearance of physical defect. Furthermore, the character of Frederick Treves in the play appears to be much more morally ambiguous than Lynch’s benevolent doctor.

Through an unconventional and complex retelling of The Elephant Man, The Saint Sebastian Players explore the meaning of humanity in both its hideous and beautiful forms.