A strong rushing attack and trick plays headlined Chicago’s 41­–17 victory over Kenyon at Homecoming. The win pushed Chicago’s winning streak to three as they head into Conference play. 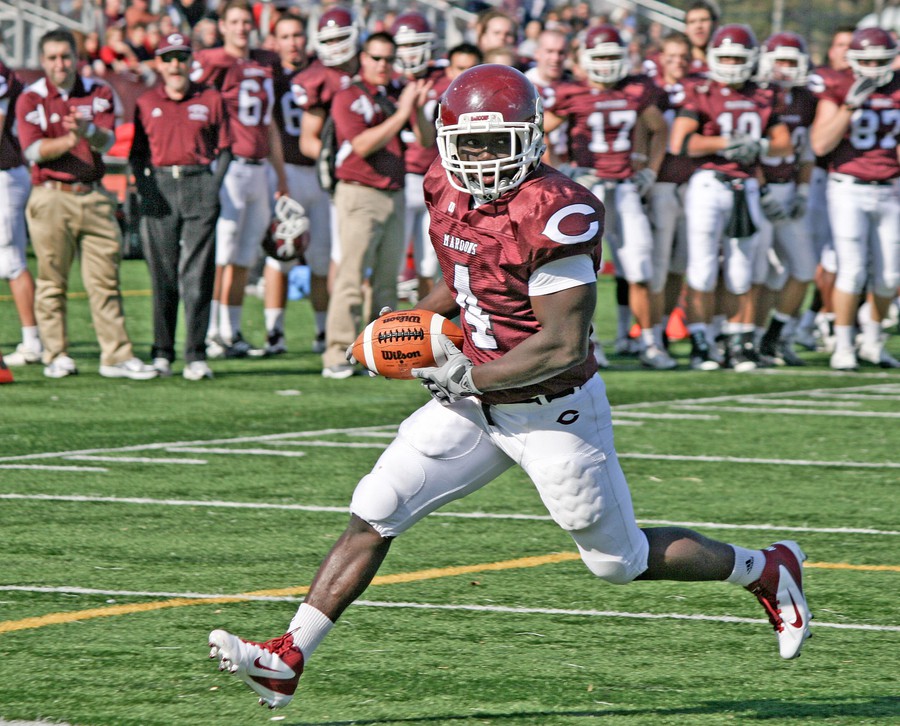 A strong rushing attack and trick plays headlined Chicago’s 41­–17 victory over Kenyon at Homecoming. The win pushed Chicago’s winning streak to three as they head into Conference play.

Both teams had impressive showings in their respective rushing games, each racking up over 200 yards on the ground and averaging over four-and-a-half yards per carry, but it was Chicago that was able to find the end zone early and often.

An unexpected double reverse yielded a 16-yard touchdown early in the first quarter for third-year wide receiver Dee Brizzolara to open the game for Chicago. After Kenyon answered with a rushing score of its own, the Maroons reclaimed the lead with another trick play touchdown, as fourth-year running back Francis Adarkwa completed an eight-yard halfback pass to third-year quarterback Kevin Shelton. Adarkwa ran in another touchdown on the goal line near the end of the first quarter to increase Chicago’s lead to 11.

In the second quarter, the Maroons widened the gap when second-year quarterback Vincent Cortina completed a 7-yard pass to Brizzolara. Chicago went into halftime with a comfortable 27–10 lead and strong hopes of winning their third straight game.

“We started fast right out of the gate and scored very quickly,” said fourth-year cornerback Emmett Carrier. “When our offense gets going from the start, we’re very tough to beat.”

Chicago moved closer to victory when Carrier intercepted the first pass of the second half and returned it 34 yards for a score. This was Carrier’s third interception of the season, and the second time he has returned one for a touchdown.

In the fourth quarter, first-year running back Zak Ross-Nash scored from one yard out to pad the lead and the Maroons held on to hand Kenyon its 20th consecutive loss.

The Maroons excelled in many phases of the game on Saturday, but the running game was perhaps most impressive. Ross-Nash and Adarkwa led the Maroons in rushing yards with 82 yards and 73 yards, respectively. Seven other Maroons combined for 59 yards, including 15 yards on a fake punt from third-year kicker Jeff Sauer mid-way through the third quarter.

“The offensive line did a great job this week,” said Cortina, who completed five passes for 64 yards and a touchdown. “We were able to establish a run game early, which opened up the passing game nicely. We only had one rushing play that went for negative yards and, as a passer, I had plenty of time in the pocket to deliver the pass.”

Chicago’s defense also showed up, forcing three turnovers and not allowing a passing touchdown all day. In addition to Carrier’s pick six, second year linebacker Ian Lazarus had an interception and second-year cornerback Mychael Gilliam recovered a fumble. Perhaps more importantly, though, the defense limited Kenyon to only 109 yards passing, a much lower figure than the 263 yards per game they had given up through the air in the games previous to Homecoming.

Meanwhile, Brizzolara’s pair of scores gave him sole possession of two more modern-era school records. He is now the all-time leader in both total touchdowns (37) and total points (224).

“We all were playing very loose,” said Brizzolara. “The Homecoming atmosphere helped us focus on football and made playing more fun.”

Chicago has noticeably improved on several aspects of the game since the early part of the season. The mental mistakes that once plagued the Maroons are now few and far between and the team has made significant strides on both sides of the ball. However, there is still work to be done going into conference play.

“We still have many improvements to make,” said Cortina. “We want to put together a complete game with no turnovers and no negative plays. In order to win UAAs, we are going to need to practice really well and push each other to get better.”

“I think our defense has improved the most throughout the season,” said Brizzolara. “But our offense still needs to find a rhythm and work to get better if we want to win the conference.”

On offense, the Maroons may try to expand and utilize more players, in order to have players with fresh legs available late in games and to avoid injuries to starters.

“We’ve been very fortunate to not be too banged up at this point in the season,” said head coach Dick Maloney.

The Maroons also hope to improve on consistency as they head into the most important stretch of their schedule.

“We’re always looking to work on consistency as a team,” said Maloney. “It’s our number one goal.”

There were not many mistakes at Homecoming, but if the Maroons can fine-tune their few remaining weaknesses, they will undoubtedly be a force to be reckoned with.

“For the past couple weeks and especially heading into UAAs, we’ve been working on our consistency on both sides of the ball,” said Carrier. “When we limit big plays and turnovers, we’re a real good team.”

Chicago will head back out on the road to Cleveland to face Case Western, owners of a 6–1 record and a five-game winning streak, for the first game of UAA play on Saturday at 12 p.m. (EST).