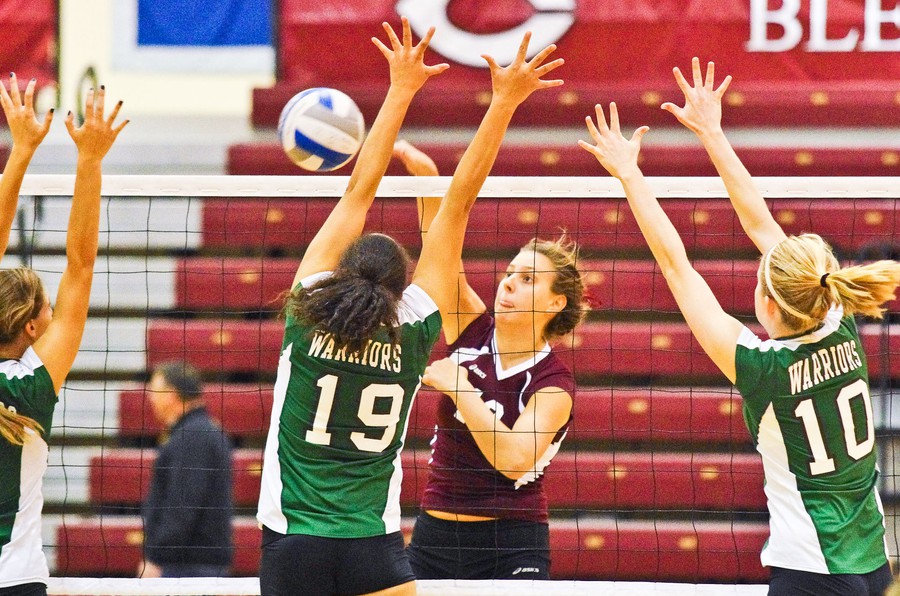 It seems that, for this team, what goes around comes around, as the 16th-ranked Chicago Maroons (27–4, 5–2 UAA) closed out the regular season in the same place they started—Elmhurst, IL—and in search of the same ideal: consistency. They won three of four matches at this second Elmhurst Invitational, opposite their sweep in the first one at the front end of the campaign.

“Going into this weekend we had a team goal to win every game in three,” fourth-year Isis Smalls said. It was a marvelous start even if it would not prove itself true.

The team then turned to its pairing against Wheaton (16–12), a rematch predicted by Chicago’s win earlier in the year. The Maroons enjoyed some afternoon delight in the 25–14, 25–17, 24–26, 25–18 win, once again topping a middling Thunder squad. Chicago was led by third-year Caroline Brander, an emerging star who smashed 19 kills. Fourth-year Colleen Belak, second-year Morgan Clark, and Smalls also tallied double-digit kills in the carnage. On the defensive end, the Maroons had a field day with 17 block assists and 12.5 total team blocks.

“We were being aggressive and taking control of the game despite what the other team brought to the table,” Smalls said.

The stunner came later in the day as the Maroons faced off against their hosts, No. 19 Elmhurst, a team they had defeated in the first Elmhurst Invitational to start the season.

“The Platteville game was a good showing for us,” DelZenero said. “We were mentally focused and our physical play showed it. [But] by the time we got to the Elmhurst game, I do not think we were prepared, mentally or physically.”

The Blue Jays sent a ripple through the volleyball universe with their take-no-prisoners mentality in this rematch. They captured the first set, suffered a small setback in the second, and closed out the last two for a convincing 25–19, 26–28, 25–21, 25–21 smiler.

“They wanted it, they did what they needed to do to take the win away from us, and they didn’t wait on us to get it together or put the game in question,” Smalls said. “They came out consistently and made adjustments better than we did.”

The Maroons must now gear up for the UAA Championships two weekends from now, for which they will surely try to improve on their past performance. They realize that trials have come and gone, and that the moment of action is directly before them—the trajectory of the season has effervesced to the point of no return.

“What we learned this weekend is that bringing that consistent game is no longer optional,” Smalls said. “It’s a bare minimum requirement [now] that we are heading into the playoffs and teams are out for blood because they want to win just as badly as we do. No one is going to hand us the game anymore.”

The Maroons’ hope for continuity is poised at this moment as they head into the final leg of their season.