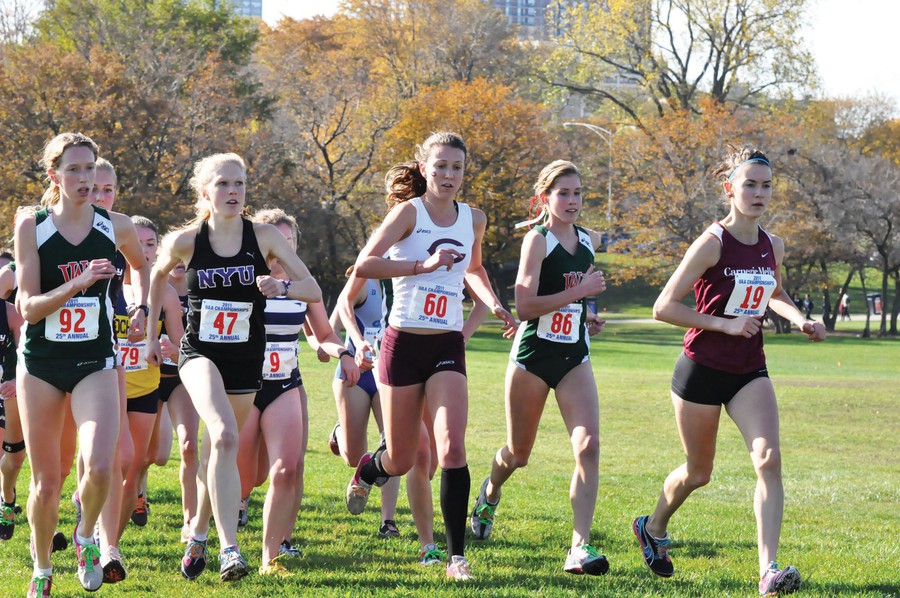 If there was any time for an upset, it was Saturday at Montrose Harbor, the site of the 2011 UAA Championships for cross country.

It had the desired ingredients: a home site, fair weather, a lakefront location, a pro-Chicago crowd, and fast-paced competition. But it was not to be.

The 10th-ranked men and 33rd-ranked women finished third and fourth respectively in the first postseason race. While the results were not surprising, they were not as high as either team had anticipated.

Fourth-year Brian Schlick was hoping for at least a second-place finish for the men’s team.

“I feel we performed satisfactorily. We were definitely hoping to beat NYU and were not able to do so,” Schlick said. “However, we had some people, such as Gregor Siegmund and Isaac Dalke, step up and contribute. Hopefully they can continue that momentum into regionals.”

The women aimed high, but finished behind Wash U, NYU, and Emory.

“The UAA championship was pretty disappointing. Going into the race we were all pretty pumped up–we knew exactly what to do to get second place,” fourth-year Sonia Khan said. “It’s really frustrating not racing well when it comes to mental aspects because we all know we are in great shape and obviously want to do well but we just haven’t been executing ‘the plan’ at all.”

Fourth-year Jane Simpson finished 22nd overall with a 6,000-meter time of 23:34. She was also frustrated by the meet.

“We were hoping to have a standout race before Regionals. We’ve had trouble getting all the elements of a good team finish together,” Simpson said, “so now we’ll have to wait another two weeks to see if we can pull ourselves together.”

Rachel Ohman, a fourth-year who finished 10th in Saturday’s race, shared her opinion.

“We have an incredibly strong team,” she said, “but have had some difficulties performing well on the same day.”

For the women, the postseason began with a bad start.

“From the start, a lot of us got stuck behind slower runners and were not able to start moving till about 1,000 meters in,” Khan said, “and I think this mentally affected us when it shouldn’t have.”

Despite the small size of the field and slightly muddy conditions, there was a good show of fan support at the Championship.

“Last time we ran at Montrose Harbor there were a lot more people at the meet,” Schlick said. “Thankfully, we had a good number of U of C students, including our track team, come up to cheer us on. They definitely helped us in the later stages of the race.”

Indeed, according to Simpson, the crowd size had its benefits, at least from a runner’s perspective.

“The cheering there was excellent,” she said, “loud from the variety of fans, but small enough that a runner could make out specific messages from teammates or Coach Hall.”

Ohman, who was named to the All-Association Second Team after the race, was thrilled with the atmosphere at the race, even though she was disappointed with her individual performance.

“Yesterday was perfect racing weather, and the atmosphere was more energized than any UAA championship meet I’ve attended,” Ohman said. “We are incredibly grateful for the enthusiasm and encouragement we received.”

Third-years Billy Whitmore and Isaac Dalke were named to the All-Association First Team.

With the Midwest Regional Championship in two weeks, it’s time to excel and exceed expectations.

The Maroons think they will be ready.

“I think we have a lot to look forward to at Regionals. We had some strong performances from Isaac Dalke (5th), Gregor Siegmund (17th), and Billy Whitmore (3rd),” Schlick said. “If they can keep that up we should have a strong showing.”

According to Ohman, Saturday’s Championship should be used as a learning experience for the women’s team.

“With two weeks left before the race, we need to be more focused, energized, and united than we’ve been all season. UAAs helped to show us the work we still have left to do before the regional meet,” Ohman said, “but I am confident that our women’s team will be ready to realize our dream of qualifying for Nationals.”

The Midwest Regional Championship meet will take place at Saukie Golf Course in Rock Island, Illinois on Saturday, November 12. The race is hosted by Augustana College. The women’s 6,000m begins at 11 a.m., and the men’s 8,000m starts at noon.