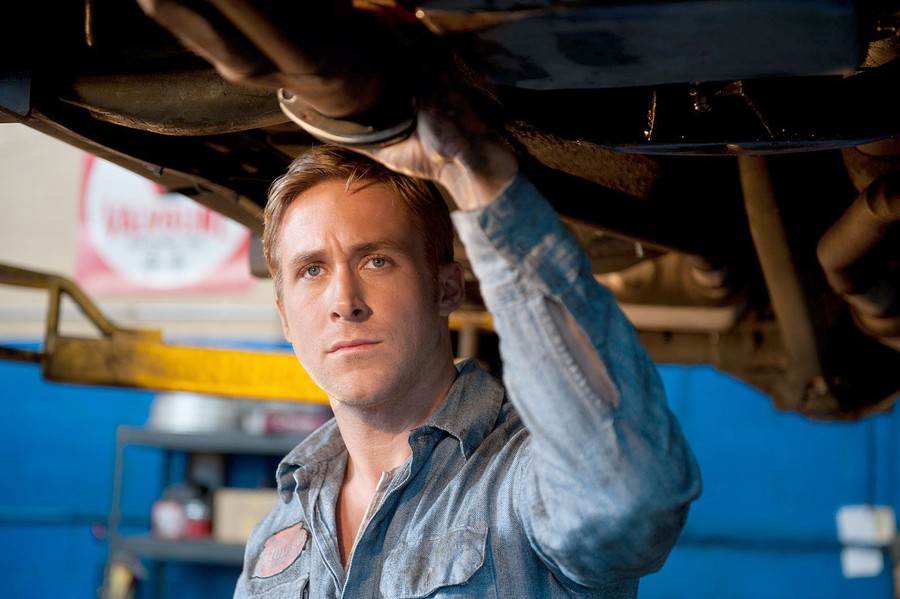 A hot mess of pink and gore, Drive stretches classic Hollywood tropes in every direction. With a plot line reminiscent of the most maudlin films of the past, Drive puts a dark twist on an innocent love story. Danish director Nicolas Winding Refn’s first film produced in the U.S., Drive won him the Best Director prize at the Cannes Film Festival. Tellingly, it mixes high and low art perfectly, and much more subtly than Tarantino’s work.

Ryan Gosling’s character (we are told his name is “Driver,” though he’s never really named at all) is an archetypical tall, dark, and handsome hero who probably says fewer than 50 words in the entire movie. Drive has a long tradition of L.A. stories to look back to and reflect on. In the style of Down in the Valley (2005) and Nathanael West’s 1939 novel The Day of the Locust, Driver appears from nowhere, and back to nowhere he returns.

Driver works as a Hollywood stunt driver and mechanic by day and a heist accomplice by night. His hardened, taciturn demeanor is only compromised when he meets his neighbor, Irene (Carey Mulligan) and her young son, Benicio (Kaden Leos). He becomes devoted to them almost instantly, as if they’re the only oasis of innocence left in this corrupt place. However, things get complicated when Irene’s husband, Standard (Oscar Isaac) is released from prison and the family falls back in dangerous hands. Of course, Driver, being the heroically empty shell of a man he is, must step in to save Irene and Benicio, and the film threatens to become merely a sexier version of Slingblade (1996).

Drive, with its sharp style and garish ‘80s soundtrack, is a study in extremes. While the film revels in nostalgia and a certain dose of camp, the film knows it’s too pretty to actually indulge in this kitschy, countercultural, and undoubtedly ugly genre, as last year’s Black Swan did. The over-stylization, storyline, and Gosling’s stoic acting are nearly beyond believability, though they’re so soaked in the cinematic tropes of yesteryear that they can slide by.

The film is largely a commentary on cinematic stereotypes of the past. A common, and patently absurd, premise is transformed into something original by giving the main man an obnoxious scorpion jacket, adorning the film’s credits with hot pink, and filling the soundtrack with heavy nightclub music. It’s almost as if Drive is just begging you to make fun of it so it can turn around and kick your ass. It’s a heady mixture of naivety and vulgarity, the sickly sweet romance balanced by the outburst of outrageous and stomach-churning violence. What we’re left with is an extremely cool, engaging, and at times unsettling story of a truly imaginary character—someone who will never exist in real life, just as he barely exists on the screen.