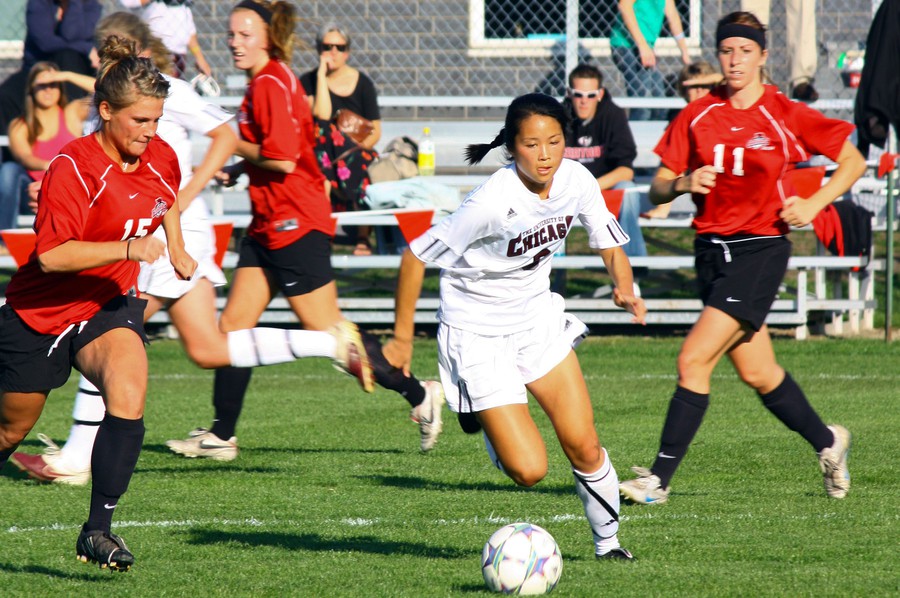 After losing to third-ranked Wheaton and battling fourth-ranked Emory to a double-overtime tie last week, the Chicago women’s soccer team beat Carthage 1–0 on Tuesday for its first win since September 22. In a first half dominated by Chicago, neither team was able to find the back of the net. The Maroons were able to get off 21 shots during the game, but weren’t able to finish one for over 80 minutes.

“Coming off the Emory game, that was a very high-energy, high-stakes game since it was our first UAA game,” fourth-year Liz O’Brien said. “Coming into a game like the one on Tuesday is always difficult when you’re playing a team that is potentially weaker. That might have played a part in a lack of sharpness against Carthage, but our attitudes weren’t down.”

After the unproductive first half, Chicago head coach Amy Reifert used a visual aid to rev up her team. “Our coach was really effective in halftime,” O’Brien continued. “She showed us a sketch diagram with what Carthage’s lineup looked like, and how we needed to translate what we were already doing into goals. She does a good job of figuring out our weaknesses and what we should focus on in the second half of games.”

Just over 36 minutes into the second half, the Maroons were able to break the shutout. First-year Ellie von Storch slipped a pass in the box to fourth-year Allison Hegel, who knocked the ball into the lower-right corner of the net for her sixth goal of the season.

“I play midfield, and my coach wanted me to move forward more than usual. I was making a forward run that I might not usually make, and someone put the ball through to me. I was in the box, and I had a shot on goal that wasn’t clear,” von Storch said. “Allison was in a good position, and I made a good pass that worked out. It wasn’t anything special, but it was a good fundamental play, and we just needed to get a goal.”

“There was a big contrast between our first-half and second-half play—we were sharper, and our focus was better,” second-year Claire Mackevicius added. “We dominated the entire game, and so it felt weird afterwards with the 1–0 win since it felt like a more lopsided game. As the time starts to wane, there comes a point where you need to score and win. We capitalized on an opportunity, and the bottom line is that’s what you need to do.”

The team now moves to a four-game road stretch that includes games against Carnegie Mellon, Brandeis, NYU, and Millikin. The next home game is on October 28 against Case.

“We’ve been a little stagnant the last few games,” O’Brien said. “We started off the UAA league 1–1, so we’re still in the running for a league title, and we want an automatic bid in the NCAA Tournament. We’re excited to travel, and UAA games get us really excited since they mean so much. We have great energy going into them.”