Students and community activists staged a "die-in" and reenacted the "Thriller" dance in protest of the UCMC's lack of a level-one trauma center. 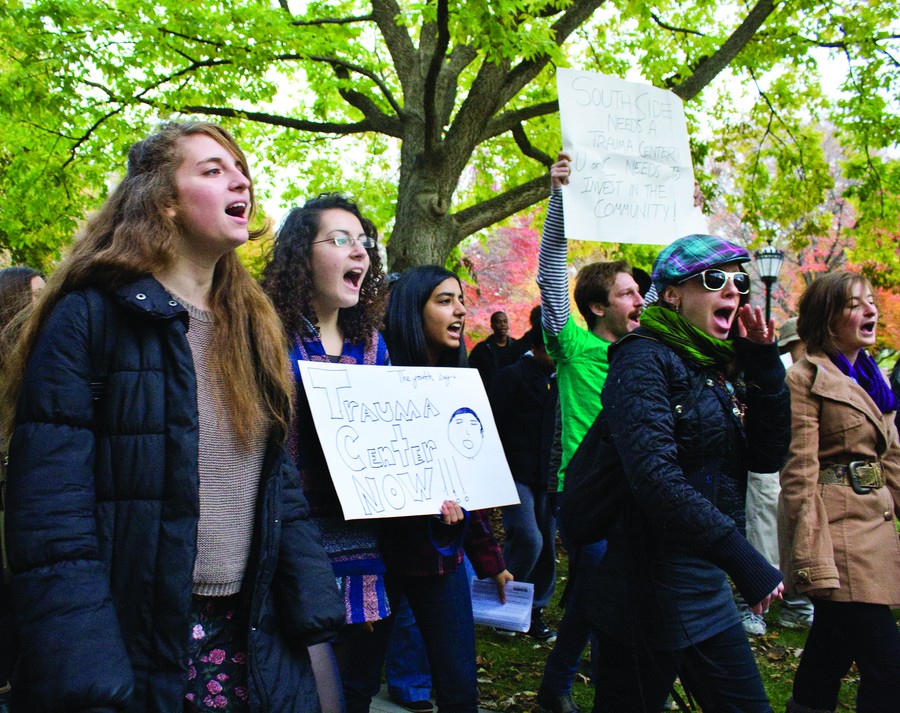 Community and student activists died in droves on campus yesterday evening, collapsing from mock injuries in another “die-in” protest of the University of Chicago Medical Center’s lack of a Level 1 trauma center.

Members of South Side advocacy group Fearless Leading by the Youth (FLY) and student RSO Student Health Equity joined members of the community in a march from the corner of East 61st Street and South Cottage Grove Avenue onto the main quadrangles, calling for the UCMC to re-open its trauma center.

Protesters staged a “die-in” to commemorate those who they allege have died after sustaining fatal injuries without having immediate access to trauma care on the South Side. Currently, there is no Level 1 trauma center on the South Side.

In a novel moment of Halloween flair, protesters then pretended to raise the “dead” and danced to Michael Jackson’s “Thriller.”

“It’s wonderful to see how much passion they have and great to listen to what others are asking the University to be and have that voice heard,” third-year Olivia Woollam said.

The corner from which the march began had great significance for the protesters—it was the street corner where 18-year-old Damien Turner, a FLY co-founder and activist calling for a trauma center, was fatally wounded in a drive-by shooting in August 2010. Turner was pronounced dead at Northwestern Memorial Hospital on North Columbus Drive in the Loop an hour and a half after the shooting.

After Turner’s death, activists began calling for a study to explore the feasibility of a trauma center at the UCMC. At an October 20 “teach-in” meant to spread awareness about trauma care on the South Side, Northwestern University School of Medicine Professor Marie Crandall argued that re-opening the UCMC trauma center would save about seven lives each year, despite costing the hospital $15 million annually.

The UCMC closed its adult trauma center in 1988 in order to invest in clinical specialties best suited for a research-based university hospital, according to a statement the hospital released on Monday morning in response to calls for a feasibility study. The UCMC is working to address other health issues on the South Side, the statement said, including HIV, diabetes, obesity, and breast cancer.

“The data do not support the need for a feasibility study on a Level I adult trauma center here,” the statement reads.

Activists said that for residents of the South Side, the re-opening of the trauma center would mean more than just receiving better medical care.

“It means a change, a longing for a place for us at UChicago, a place that is safe, where people care,” 16-year-old FLY member Victoria Carter said.