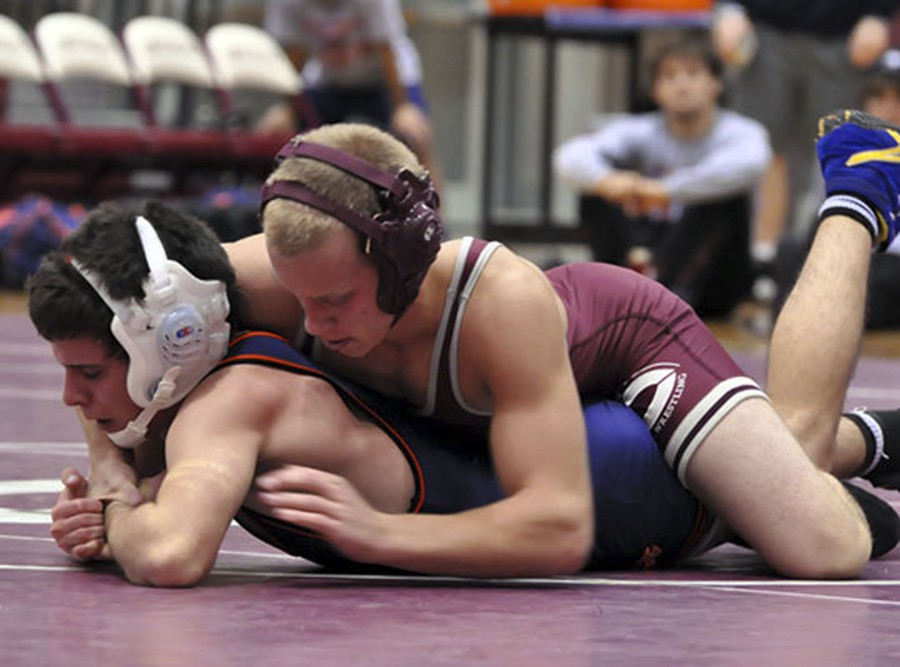 The Maroons struggled and lost three matches in the final seconds, leading to a 15–22 defeat to Wheaton College November 8.

The match was the first of the season for both teams. The Maroons’ next competition is duals against Concordia University Wisconsin, UW- Eau Claire, and UW-Platteville Saturday.

The duals will offer numerous opportunities for more of the team to compete than a typical match. This experience and practice is exactly what the team needs to improve, said Head Coach Leo Kocher.

“We’ll be able to wrestle a lot of people and rotate the lineup,” Kocher said. “I just want to see us be competitive against these teams now that we have a little more experience and our first match under our belt.”

Kocher said the team is dominated by first and second-years. More first-years will be in the lineup on Saturday, according to Kocher. Kocher said he tries to work with younger wrestlers to reform their techniques from their past experiences.

“Sometimes they get out there and revert back to what they did in high school,” Kocher said. “We need to focus on changing some of the techniques we go to and use the techniques most effective against other collegiate wrestlers.”

“I remember how nervous I was for my first meet last year, especially because it’s at home. But then you feel a lot more comfortable. We’ll get more first-years out wrestling this weekend and they’ll get those first matches out of the way,” Hoyt said.

Team members also hope to learn from some of the mistakes made during Tuesday’s match.

After the Maroons won the 141-weight class through forfeit, Hoyt and third-year Josh Hotta lost to their opponents.  Third-year James Layton won the team’s first match of the night by gaining an early advantage. Layton got a take down and near fall two minutes into the first period, racking up four points. He kept the lead and finished his match 5–2.

Layton said he tried to use his strengths to hold on to his lead for the next two periods.

“I just tried to feel him out and was able to take him down,” Layton said. “I get a lot of near-falls.”

However, the team lost three of its matches by one or two points. Hoyt went into his third period down by one point and was unable to take the lead in time to earn a decision.  First-year Ryley Hankenson lost his match when he was taken down with four seconds left.

2011 UAA Rookie of the Year second-year Jeff Tyburski also lost his match in the final seconds. The match was tied 2–2 with 30 seconds left and Tyburski had a tight hold on Wheaton’s Kyle Patton’s right leg. However, Patton gained control and got a takedown at the center of the mat with 10 seconds left.

Hoyt said the team focused on strength and conditioning and several individuals worked on fixing their own mistakes to try to turn one -point matches in the Maroon’s favor. Kocher hoped to see those victories but was also pleased with how the team did.

“On the one hand, it would have been very nice to turn those one-point losses into wins, but we battled hard and for the first meet I’m pleased they battled hard,” Kocher said.

Ultimately, Kocher said he is optimistic about the rest of the year.

“We have a group of talented guys. I think that will show itself throughout the season,” Kocher said.