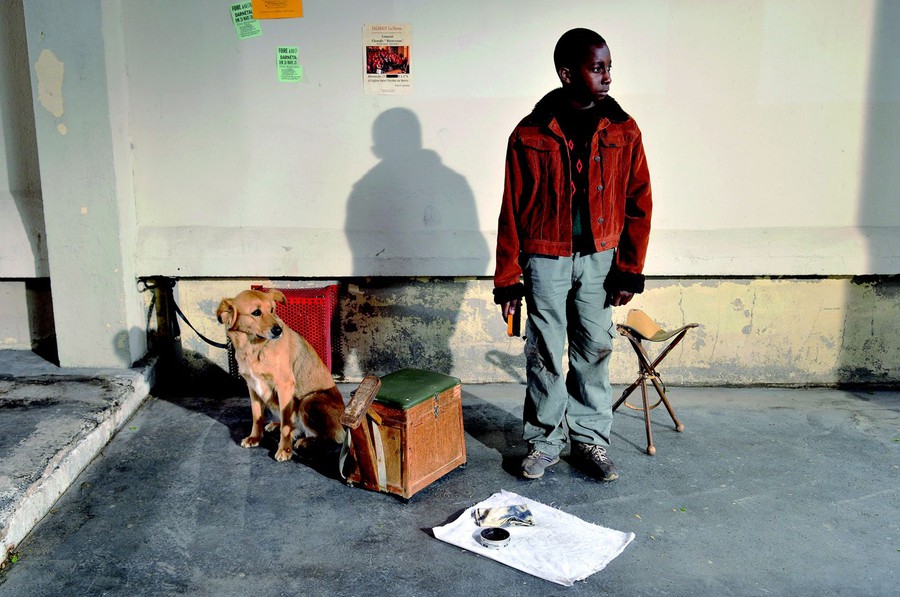 Le Havre is a feel-good movie that deals with serious issues, including illegal immigration and national xenophobia in France. Le Havre is the second French-language film of Finnish director Aki Kaurismäki who hopes that it will be the first movie in a trilogy that focuses more broadly on life in seaside cities.

Le Havre first premiered at the 2011 Cannes Film Festival in France, where it won the Fédération Internationale de la Presse Cinématographique (FIPRESCI) Award. Since its premiere in the United States, Le Havre has been shown in select theaters across the country. Most recently, it won the Gold Hugo Award at the Chicago International Film Festival in October.

The film opens with smooth-talking bohemian shoe shiner Marcel Marx (André Wilms) trying to find business in the train station of the coastal town of Le Havre. Since moving to Le Havre, Marx lives in a humble cottage with his wife Arletty (Kati Outinen) and dog Laika. Together they live off of Marx’s modest income and struggle to make ends meet. Every night, Arletty makes dinner for Marx while he drinks his troubles away at the bar. That goes on until she is hospitalized with a fatal illness.

After introducing the protagonist Marx, the film switches focus to Investigator Monet and the French police force at the harbor. After opening a storage crate, they make the shocking discovery that several refugees from Gabon have been living in the crate for a number of weeks. The French Red Cross quickly goes in to help, but not before one refugee, whose name is later revealed to be Idrissa (Blondin Miguel), escapes.

While at the bar, Marx learns of Idrissa’s escape. The French press is quick to label the innocent, wide-eyed adolescent as “armed and dangerous” with potential ties to Al-Qaeda. The embellished tabloid reports strike a nerve with Marx, and he returns to the harbor in an attempt to find the boy.

Upon discovering Idrissa wading in the bay, Marx is amused when the boy asks if he is in London. He immediately bonds with Idrissa and decides to help him. First, he leaves a sandwich and a small amount of money for the refugee. Then, after a long day of unsuccessful attempts to find work, Marx finds the boy sleeping in his shed. Idrissa tells Marx that he came with his father in an attempt to find his mother and that his grandfather is living in a refugee camp in Alsace.

Later, when Marx visits Idrissa’s grandfather in a detention center, he reveals that Idrissa’s father is dead and that his mother works for a dry cleaner in London. He gives Marx the address and asks him to help Idrissa make it to London safely. Marx agrees, and he enlists the help of his friend Chang (Quoc Dung Nguyen) and good-hearted neighbor Yvette (Evelyne Didi) to hide the boy and provide for his needs. All the while, Inspector Monet is on his tail, highly suspicious that Marx is hiding Idrissa.

As the movie progresses, Arletty’s health becomes worse and worse, but she insists that Marx does not learn of her condition because he is so childish. Facing piling bills and medical expenses, Marx must overcome significant odds in raising the money to fund Idrissa’s journey to London. After finding a smuggler willing to help Idrissa, Marx focuses on raising funds. He decides to throw a benefit concert at which real-life French rock star Little Bob performs. However, the police decide to lead a raid the next day, when Idrissa is set to leave. They search Marx’s house, his neighbors’ houses, and the local pub before finding Idrissa below the hatch of the boat.

In a surprise turn of events, Inspector Monet closes the hatch and sits on it, refusing to let the other officers find Idrissa. Marx and Inspector Monet share lunch and a drink together. Afterwards, Marx returns to the hospital to find his wife missing from her room. A doctor leads him to his wife, claiming that they have never seen such a miraculous recovery in someone as sick as Arletty. The two take a taxi home, and the movie ends with a heartwarming scene between the two.

While it borders on being unrealistic, Le Havre is a simple, yet endearing tale about a man who is incredibly charitable, despite his modest means and own personal challenges. He faces significant odds and powerful fo=es, but he is triumphant in the end. Fans of foreign films and happy endings alike will enjoy Le Havre and see it as a welcome change from mainstream movies that are saturated with dark plotlines and tragic intrigue.