In an effort to address community concerns, the University announced a preservation measure of five University-owned buildings in a public meeting organized by Fifth Ward Alderman Leslie Hairston on Wednesday. 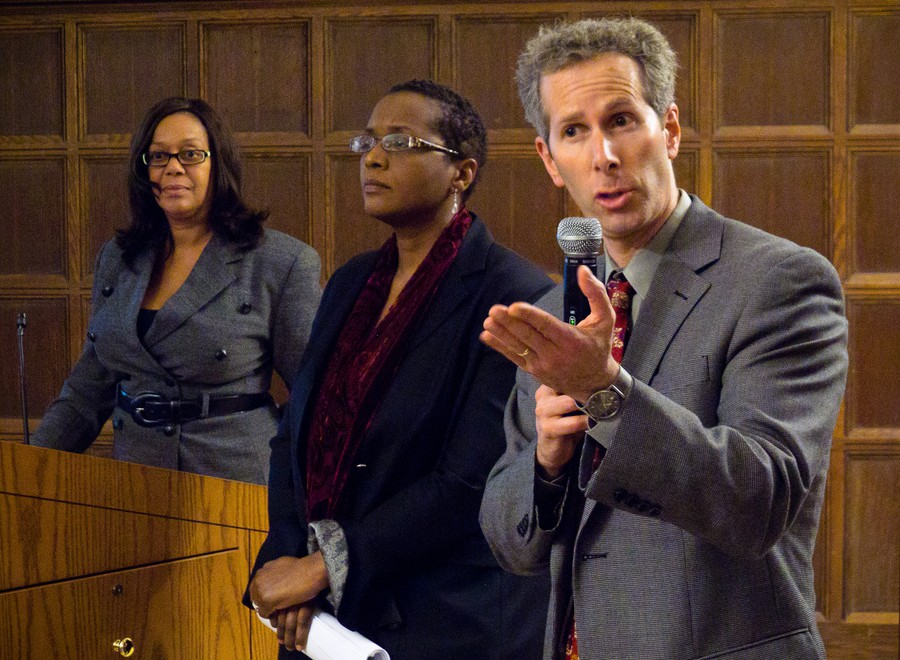 In an effort to address community concerns, the University announced a preservation measure of five University-owned buildings in a public meeting organized by Fifth Ward Alderman Leslie Hairston on Wednesday.

The measure involves creating easements, property rights for the buildings’ facades that allow for their preservation by giving alteration rights to non-profits, who then have control over all subsequent changes to those facades.

The plan will include five buildings on the 5600 and 5700 blocks of Woodlawn: The Alumni House, Meadville Lombard Theological Seminary, the Office of Multicultural Student Affairs, the Office of Human Development, and the University’s Concert Office.

University Architect Steve Wiesenthal said at the meeting that the University is aware of community concerns to keep the historic feeling of Hyde Park, which is part of the purpose of the easements.

“Along Woodlawn Avenue and along University Avenue there is very much a sense of transition from the institutional scale to the residential scale of the neighborhood. This is something that the University appreciates and is working to preserve,” Wiesenthal said.

The University also said that it is working to extinguish five existing facade easements around the hospital, which would allow them to proceed with demolition and further development of those buildings.

Though the five Woodlawn facade easements preserve historic buildings, Hyde Park Historical Society board member Jack Spicer plans to fight the five easements that the University wants extinguished. He said he will continue to solicit the support of Woodlawn and University Avenue homeowners through the Woodlawn Homeowners Association.

“By not putting easements on certain buildings it’s as if they drew a red arrow at them and said, ‘These are the ones we’re going to mess with,’” Spicer said.

The meeting also discussed an amendment to Institutional Planned Development (PD) 43, a zoning agreement between the University and the city which lays out a plan to make space for the William Eckhardt Research Center, the Becker Friedman Institute, Child Care West, and for the relocation of the Seminary Co-Op Bookstore to McGiffert House.

Hairston, whose approval is influential in the passage of PD 43, said she does not currently support creating a historic district because of unanticipated costs it could impose on homeowners and institutions in the affected areas. However, she said she would reconsider her position if homeowners voiced their support.

“It is not about one particular block or developer—it is about the whole neighborhood,” Hairston said.

Spicer said he supports a landmark district as a safeguard for the community’s buildings. “There are very few things like a landmark district that can manage such changes and guarantee the preservation of the historic character of the neighborhood,” he said.

U of C Director of Civic Engagement Ellen Sahli promised to form an e-mail discussion group with concerned members of the community and plans to reconvene with the community in early January about the PD amendment and Seminary Co-Op building renovation.

Members of the community and from various concerned institutions packed the Laboratory School’s Judd Hall for the meeting, which was also attended by Executive Director of Planning and Design for Facilities Services Alicia Murasaki and VP for Community and Governmental Affairs Sonya Malunda.