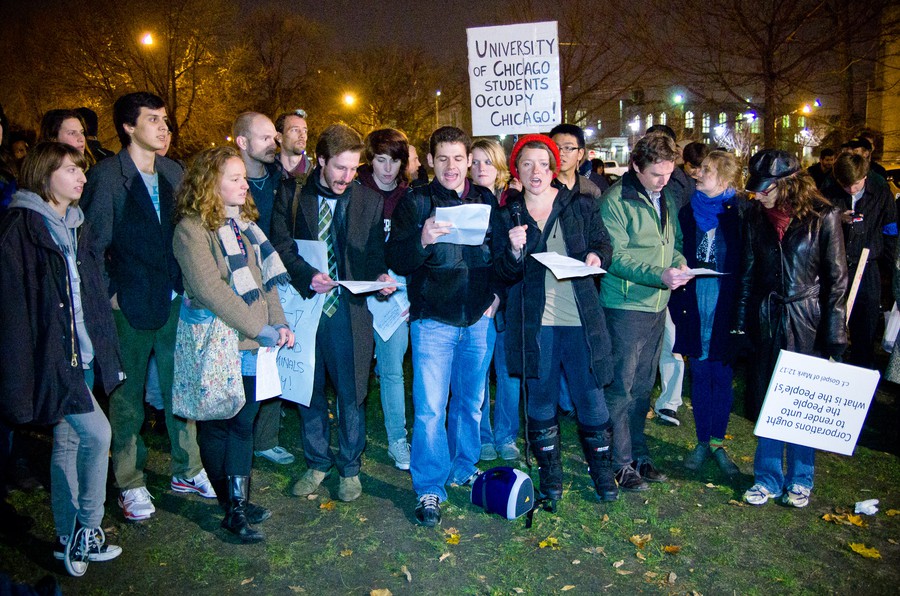 More than 100 student and community protesters poured onto the sidewalk outside International House last night to “unwelcome” a talk by former Treasury Secretary Hank Paulson and former Secretary of State Condoleezza Rice, undeterred by the fact that the talk had been postponed.

The University announced Monday morning that the talk had been postponed indefinitely due to “an unforeseen scheduling conflict” with Rice, who had notified the University on Sunday, according to University spokesperson Jeremy Manier.

The protests were part of Occupy Hyde Park, a local iteration of the Occupy Chicago movement organized by students in UChicago Occupy, a group on campus recently denied RSO status.

“Tonight, the 99% stood up and said that this was wrong, that we would not be silenced, that we would come here and disrupt [Rice’s] speech. And what happened? She ran like a coward! And today, the 99% are victorious,” Occupy Chicago secretary Ryan Metz said.

Organizers emphasized that the purpose of the protest was not to drive away the speakers but rather to engage them in discussion.

First-year Colette Robicheaux maintained that the protesters were not objecting to Rice and Paulson’s right to speak, but rather to the presence of two high-profile figures who have “no shortage of outlets.”

“Our feeling is that these are people who have had a microphone in their hand for the past decade, and this is a chance for us to tell them how we feel. They write books. If they want to be on TV, they are on TV. If they want articles to be published, articles are published. When we want to make our voices heard, we get taken to jail en masse,” Robicheaux said.

Reactions to the event’s postponement were varied. Metz hailed the delay in a speech, calling Rice a “war criminal” and both Paulson and Rice as “the enemy,” even as others defended the right of the invited speakers to free expression.

Some Occupy Hyde Park protesters questioned whether the University postponed the talk after discovering plans for the demonstration.

“I believe the unforeseen scheduling conflict was that there was going to be a protest,” fourth-year Brita Hofwolt said.

Both Vice President for Campus Life Kim Goff-Crews and Manier said that the protest did not influence the event’s postponement. The Chicago Sun-Times blogged Monday evening that Rice had double-booked the talk with a fundraising event with Representative Aaron Schock (R-IL).

On Sunday afternoon, Goff-Crews sent a joint email with Provost Thomas Rosenbaum with the subject header “Freedom of Expression,” reminding students to “protect a speaker’s right to be heard.” Goff-Crews said Monday that the e-mail was not sent specifically in connection to the talk, but that the University knew about and had prepared for the demonstrations.

During the protest, students read a statement that said the event’s postponement showed that Paulson and Rice could not handle free inquiry.

According to organizer and Core lecturer Toby Chow, another protest will occur when the Rice and Paulson event does take place.