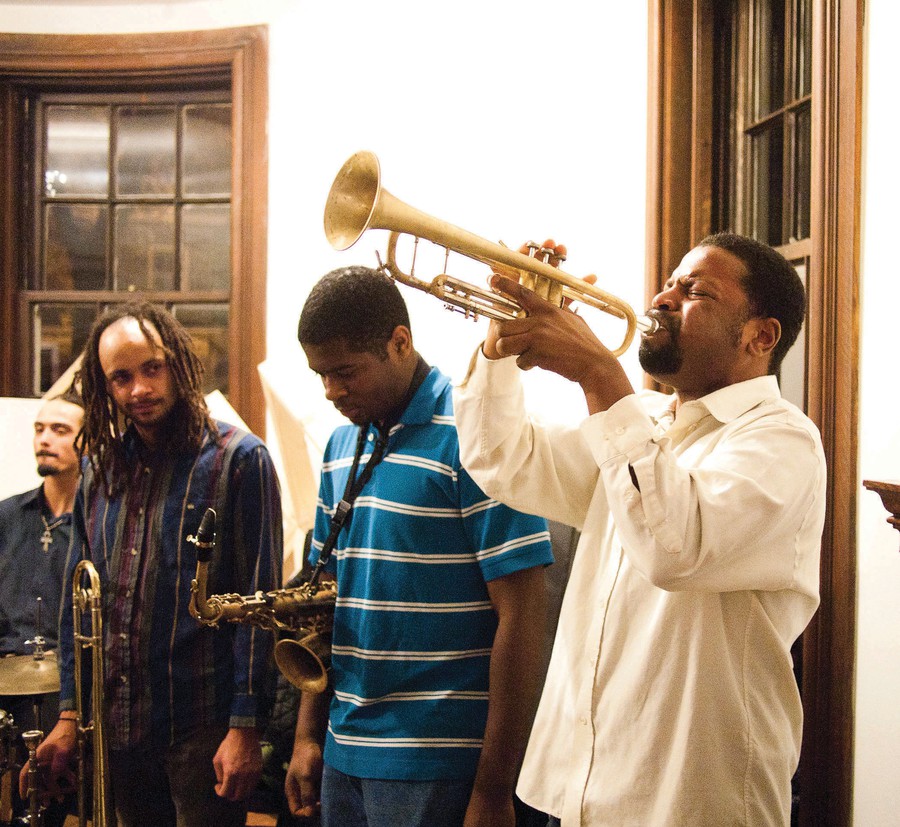 The event, the brainchild of UChicago alum Adama Wiltshire, celebrates the music and artwork of a diverse assortment of artists. “The idea was to have a space for multicultural art to be displayed. We want it to be a celebration of different cultures and different ethnicities,” said Michelle Bentsman, the co-president of Beats and Pieces, and a fourth year Fundamentals major and Visual Arts minor. Bentsman put out an open call for artists and musicians on the Chicago Artist Resource, an online website for local artists, and received a lot of responses.

Beats and Pieces decided to collaborate with Laura Schaffer, proprietor of SHoP, a new arts collective that aims to “set up an independent cultural hub of production” in Hyde Park. Schaffer was instantly enamored. The space, a cavernous mansion on South Woodlawn Avenue, was the requisite setting for such an affair. “They told us about their ideas and we thought it was an excellent way for us to bridge the community and the University and bring people together,” said Shaeffer.

The event was very casual, in the front room of the building. A makeshift stage was set up for musical acts, and, in the dining room, artwork from local artists was put on display. Chef Iccha Devi Ra, ‘The Reluctant Vegetarian,’ served platters of various hors d’oeuvres, in addition to a bowl of banging pasta. A paucity of seats made standing a necessity for most people, but having a number of rooms—as opposed to one, as Beats and Pieces had had in past years—captured the peripatetic tone of a real art gallery.

Music was certainly at the center of the event, even taking into account all the abundance of interesting artwork. The Beats and Pieces board chose musical acts that reflected the organization’s core mission. One act, K. Serra, used synthesizers and an old keyboard to create a signature techno sound. The Assyrian-Chicagoan, whose real name is Rachel Thomas, derived her stage name from the famous Spanish expression ‘que sera’. The 27-year-old toyed with law school before joining a psychedelic rock band and hasn’t looked back since.

Other musical acts included the world music stylings of Zamin, a band comprised of Northwestern classical musicians with a penchant for Hindustani music. Lead singer, Zeshan Bagewadi, a professional opera singer, used his classical training to glorious effect, wafting on the high notes as he sang in his native Urdu. “We all come from very different backgrounds,” said Bagewadi after his set, “There are three Jewish people in the band, I’m Muslim. It’s all an aggregation of people that want to make wonderful music. We like to fuse the sounds of acoustic instruments with Hindustani vocals.” He’s slated to begin a three month stint at the Sarasota Operahouse in Florida shortly.

Another act was Eigenfunk, a six member band featuring the trombone, alto sax, and vibraphone, in addition to other instruments. There was also some spoken word and fiction reading.

However, the act that most captured the spirit of the night was Zamin. Clutching a vintage ‘egg’ microphone to his chest, Bagewadi sang in Urdu but danced like any white indie lead singer—a true amalgam of cultures in the spirit of multicultural art.