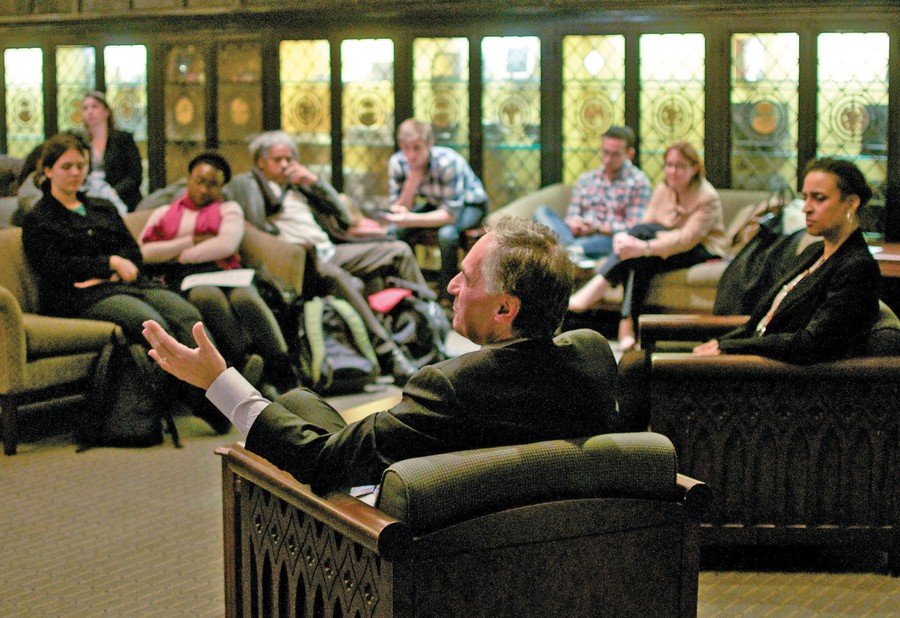 President Robert Zimmer stood his ground against students’ calls for a Socially Responsible Investment Committee and asserted that the University had “no part” in postponing Monday’s talk with Condoleezza Rice at an open forum Wednesday evening.

Joined by Vice President of Campus Life Kim Goff-Crews, Zimmer said that Rice made the decision to delay the talk with former Treasury Secretary Henry Paulson independently of the University.

“We had absolutely no part in her not attending. We had zero interest in a postponement. This was a decision that she alone made,” Zimmer said.

Zimmer also defended the Kalven Report, a guiding document which lays out the University’s apolitical philosophy, explaining that politically motivated investments and divestments could restrict discourse at the University to a specific set of beliefs.

Zimmer also touched on the University’s ongoing retail development at Harper Court in his opening remarks, expressing his hopes that Hyde Park will become a livelier commercial area.

Answering a student’s question on the University’s construction of office units at Harper Court, Zimmer alluded to a space shortage on campus.

“Due to an increasing demand for space on campus, we either have to move off-campus for academic space or consolidate space downtown and elsewhere,” he said.

A student questioned Zimmer about the University’s contract with Adidas; the RSO Students Organizing United with Labor has posted fliers calling for the termination of the contract, citing abuses at a company factory in Indonesia. Zimmer said that he would respond in greater detail at a later date when he had more information about the issue.

Zimmer also commented on the recent administrative panel discussion on the absence of a level-one trauma center at the University of Chicago Medical Center, calling the move “a step in the right direction.”

Other topics at the forum included progress on the Logan Center for the Creative and Performing Arts and the appointment of Derek Douglas as vice president of civic engagement.

SG President and fourth-year Youssef Kalad said that he was pleased with attendance at the forum; 35 students showed up out of the nearly 80 that had RSVP’d on Facebook.

“I thought that the attendance was great,” Kalad said. “I really liked the mix of people. I think it was great. They brought up issues—large and small—and I think President Zimmer and Kim did a great job addressing all of them.”

When asked whether she thought such events were productive, first-year Erin Simpson reserved judgment.

“Ask me in a quarter to see if these problems are resolved,” she said.