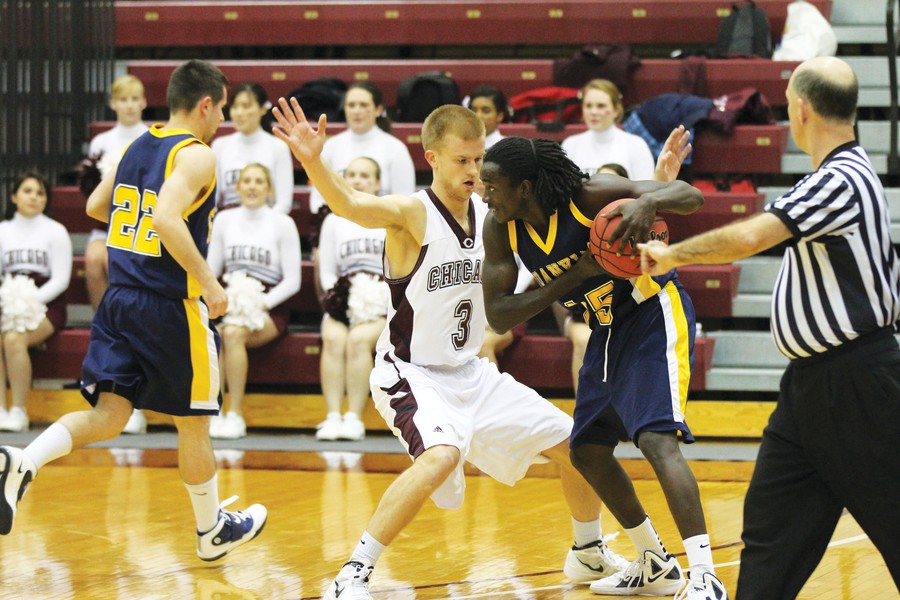 The Maroons’ fourth-year guard Matt Johnson is no stranger when it comes to scoring points. Last season, he was Chicago’s leading scorer, averaging 17.7 points per game, and he has continued the trend this season.

The game did not start on the right foot for Chicago. The Grizzlies burst out of the gates with a 9–0 run in the opening three minutes. Sotos said that deficit was created on both sides of the floor.

“I thought it was a combination of being rushed on offense and being lackadaisical on defense,” he said.

With 16:08 left in the half, Sotos sunk a shot from behind the arc to cut the deficit to six points.

Soon after, Chicago’s head coach Mike McGrath substituted all of his starters. He said that the large deficit was not the mentality behind the switches.

“Actually, that was when I would’ve subbed all those guys anyway,” McGrath said. “I try to not to overreact to things. I try to be pretty calm.”

Whatever the rational behind the substitutions, they proved to be effective. A three-pointer by fourth-year forward Chase Davis gave the Maroons a 12–11 lead with 14:27 remaining in the half.

Still, the agility and physicality of the Grizzlies put them back on top for the next six minutes.

“They’re a scrappy group, and they’re an unorthodox group in terms of how you play against them,” McGrath said. “It’s tough to get a rhythm against them the way they played.”

With 5:50 remaining in the half, Johnson knocked down another three-pointer to give the Maroons the 23–22 lead. Chicago wouldn’t trail the rest of the game.

Johnson would score seven points in the last six minutes of the half to give the Maroons a 37–31 lead at halftime.

Chicago maintained its lead in the second half even after play began to get physical. With 12:40 left in the game and the Chicago lead at four, first-year point guard Royce Muskeyvalley put up a layup which was blocked by Grizzlies’ forth-year forward Zach Merschbrock. The Chicago first-year fell to the ground, and Merschbrock had some words for him, resulting in a technical foul for the Franklin senior.

The Maroons did not want the situation to affect them, given the tightness of the match.

“They look to get in your head with physicality,” Sotos said. “We just rely on our basketball skills.”

Chicago didn’t let up the rest of the way. An unbalanced jumper by Sotos ended the game on a high note, as the Maroons would go on to win by a score of 83–68.

According to Sotos, the correct word to characterize that shot and many other crowd-pleasing shots throughout the course of the game is swag.

Still, in spite of an early 2–0 record this season, McGrath said he does not want the team to be overly confident.

“We haven’t proven anything,” he said. “This senior class has won [fewer] games in their time period than any other class we’ve had since I’ve been here. They’re behind the curve, and they’ve got a lot to prove.”

The Maroons square off against Lake Forest tonight. There will be an added family element, as the Foresters’ assistant coach is first-year guard Ryan Davis’s father, Ken Davis. While Sotos said no formal scouting report has been conducted, McGrath said that the father-son situation will not be a factor.

Tip-off is scheduled for 8 p.m. at the Ratner Center.