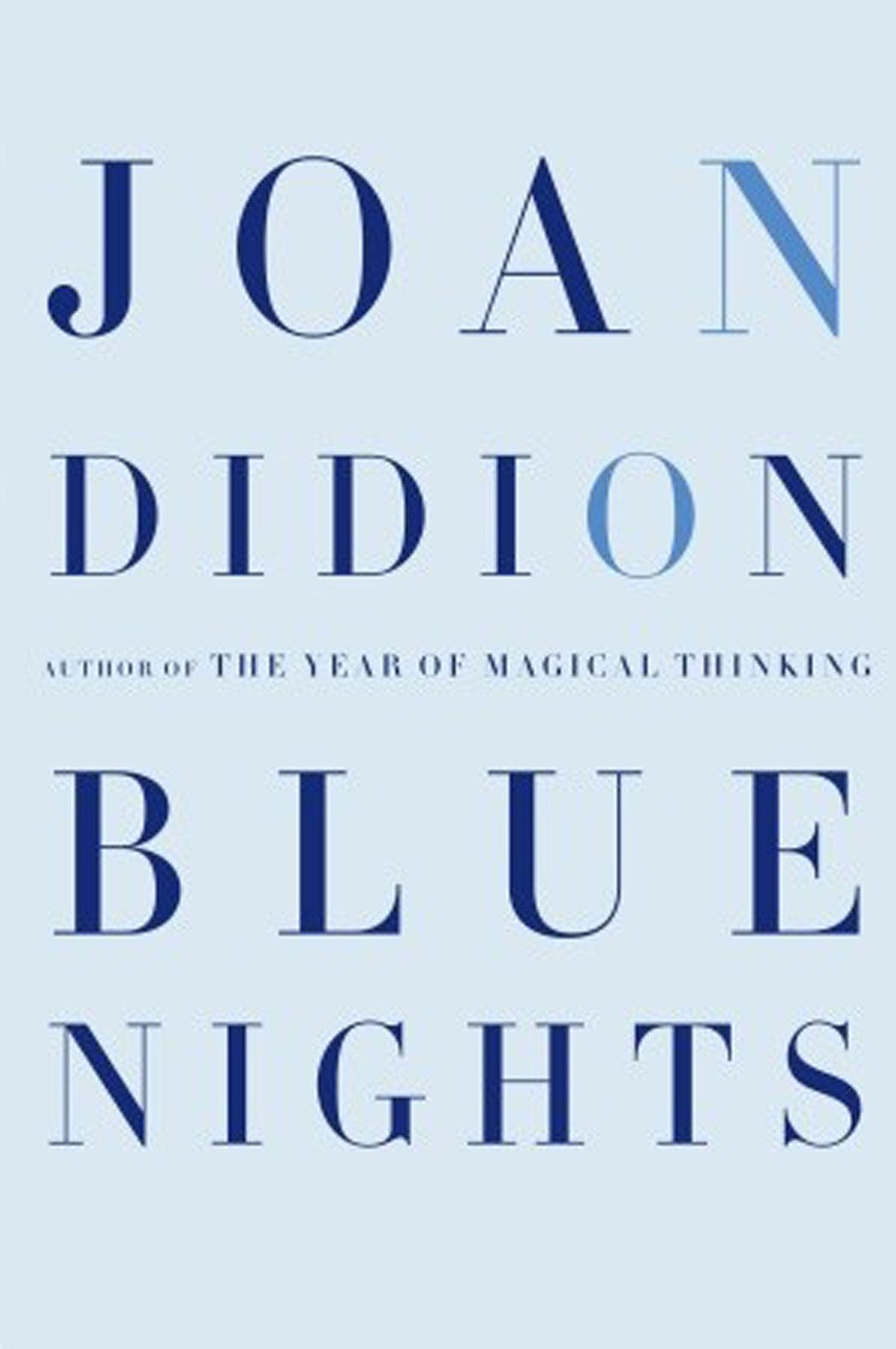 A lot can be said about the emptiness and despair at the heart of Joan Didion’s memoir Blue Nights, and a lot has already been said. John Gregory Dunne, Didion’s husband and the subject of her previous book, The Year of Magical Thinking, died of a heart attack in 2003, only a few weeks after Didion’s daughter Quintana Roo Dunne Michael was first hospitalized for freak complications caused by pneumonia. Quintana died 20 months later.

Though it’s hard to conceive of Joan Didion—never without her aviators, cigarettes, bourbon, and aspirin, the quiet, tiny badass of ‘60s and ‘70s California, the author of the haunting novel Play It as It Lays, and the best essayist alive—as having crippling fears and failings, she does have them. And they are all in this book.

Amid her usual cutting and precise observations and declarations, more unfamiliar confessions, anxieties, and despair seep in. Her control over the narrative wanes, and she’s back again to that poem Quintana wrote as a child, the same words she once spoke repeated over and over. Although her tone is distant and hard, almost as if she were reporting on someone else’s grief rather than examining her own, the pain is undeniably present.

However, it’s really in her meditations on the uncrossable distance between parent and child that Didion gets to the meat. Her self-proclaimed piece of wisdom—which she lists with similar quotes from Napoleon and Euripides, beside whom she surely believes her name belongs—“When we talk about mortality we are talking about our children,” comes to mean more than the sum of its parts. A parent and a child can never be fully clear to each other, Didion tells us. If you can never truly see your child, you must keep her around forever, until you finally can see her. “A question: if we and our children could in fact see the other clear would the fear go away? Would the fear go away for both of us, or would the fear only go away for me?”

We learn that Quintana was adopted. Because this was Southern California in the 1970s, Quintana’s parents opt for the “choice narrative,” which entails telling their child of her adoption from the very beginning, and emphasizing that they chose her. In describing her power over the narrative of Quintana’s life, the power Didion has over the narrative she’s giving us also becomes readily apparent. We’re told the story of Quintana’s adoption in the same words Quintana herself was told about it. Just as she confesses to editing a diary entry of Quintana’s she finds after her death, Didion also, in a sense, wrote the story that became Quintana’s life. She can’t help but think of her choice narrative when Quintana is diagnosed with borderline personality disorder, one sign of which is a fear of abandonment. When Quintana’s biological parents and (full) siblings come into her life as an adult, spinning her life out of control, Didion can only watch from the sidelines, completely paralyzed. Just as she loses hold of her ability both to write and tell Quintana’s story, she fears her impending inability to “locate the words that work.” After a particularly mundane anecdote, Didion writes, “I tell you this true story just to prove that I can. That my frailty has not yet reached a point at which I can no longer tell a true story.”

Blue Nights isn’t the working- through of her grief; it’s a formalized, precise, and public acknowledgement of the end. Reading through Didion’s numerous descriptions of her own health problems, including her “neuritis, a neuropathy, a neurological inflammation,” you can’t help but think about when Didion herself will die. Kurt Vonnegut, Susan Sontag, and David Foster Wallace have recently left us, denying us further words of wisdom. What will it be like to have one less person who can sharply and dutifully tell us what we’re doing wrong?