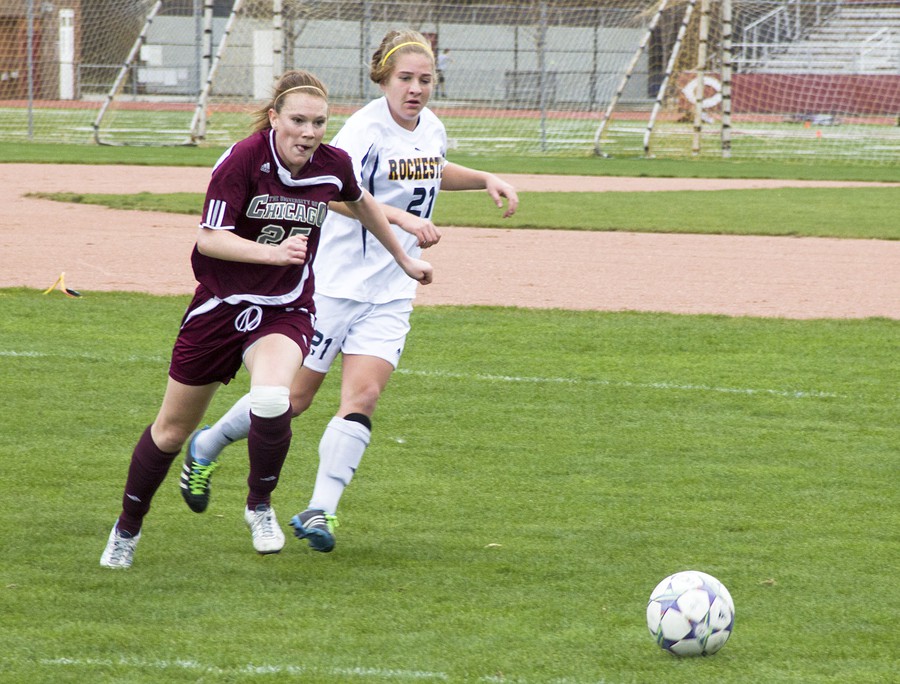 Chicago finished its season with an overall record of 9–6–2 and was 2–3–2 against conference opponents, taking sixth place in the UAA standings.

It was a roller coaster ride that ended on a low note, since a loss to Wash U (1–0) at home on November 5 came two days before it was announced that, in spite of being ranked 25th by the National Soccer Coaches Association of America (NSCAA) poll, the Maroons did not receive an at-large bid to the NCAA D-III Championships.

Collectively, Chicago did have some strong points this season. They started the season 4–0, and tied Emory (1–1) in the only conference game in which the eventual UAA champions, the Eagles did not emerge victorious.

“I think that coming from last season, where we were very successful, and we won UAAs, it was a little bit of a wake up call,” second-year defender Katie Dana said. “There were definitely some games that we should’ve won, but then...we tied Emory. We tied one of the best teams in the country.”

The Maroons are looking ahead to next season, where they hope to regroup as a team, considering the losses of strong fourth-years Gormley, forward Allison Hegel, midfielder Liz O’Brien, and Tobin.

In all, Chicago hopes for better execution of plays on the pitch next season, given the individual talent it witnessed this year.

“It’s there; the talent is definitely there,” Dana said. “So, hopefully, it shows next season.”

Fourth-year left back Maggie Tobin ended her career on a high note by being named to the All-UAA First Team. It was her third time as a member of the All-UAA team, but her first time being selected for First Team. She led the defensive back line all year, starting every single game except for one because of a heel injury. The heel injury bothered her all year but did not stop her from leading the defense to seven shutouts and allowing only 13 goals in 17 matches, helping the Maroons finish 9–6–2 (2–3–2) on the season.

Rookie of the Year: Sarah Kwan

The first-year jitters? Sarah Kwan is seemingly immune to them. She started 16 of a possible 17 games, adding a whole new dimension to the offense that already featured several potent weapons. Despite being a first-year, Kwan wasn’t afraid to pull the trigger, taking 29 shots, the second highest on the team. She ultimately converted on three of them, the second-highest total on the team. She wasn’t just a scorer, though—Kwan also found her teammates for scores on five different occasions. With fourth-year forward Allison Hegel graduating, Kwan will be looked to next year to carry the offensive load.

With the graduation of Claire Denz and a spring injury to Liz Doman, the Maroons were looking for someone to take up the burden of being the starting central defender, a position that requires both intuition and skill. Fourth-year Liz O’Brien answered the call, despite being out of position, and played an important part in a stingy defense that had eight shut-outs on the year. O’Brien started 15 times this season, after not having started at all the previous three years. It’s no surprise that when asked, the announcers for the women’s team all went to O’Brien as their unanimous selection for most improved.