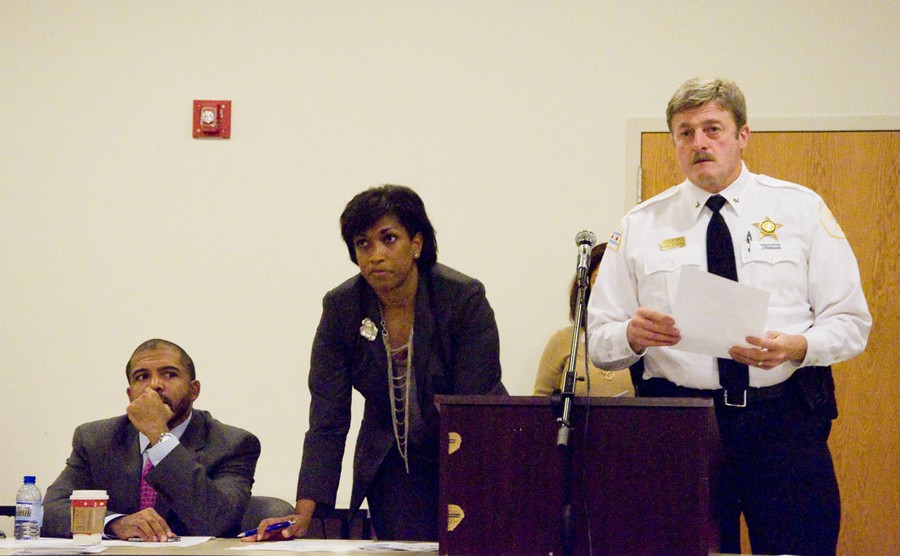 The 21st Police District covers the Hyde Park and South Kenwood area east of Cottage Grove Avenue from 25th Street to 61st Street. Mayor Rahm Emanuel’s proposed 2012 budgetary plan includes merging the 21st District into the 1st and 2nd Districts. If the plan passes a City Council vote, the consolidation will go into effect on January 1, 2012.

Representatives from both the Mayor’s office and CPD attended the meeting. Felicia Davis, first deputy chief of staff for public safety to Emanuel, emphasized the mayoral administration’s commitment to transparency regarding the 21st District’s consolidation into both the 1st and 2nd Districts.

“This is a major concern,” Burns said. “I think that it’s very important that [the representatives] hear directly from you.”

For months, there were rumors that the police station would close. In an October 12 public statement sent out by e-mail, Burns wrote that the police superintendent and the Mayor’s office had formally notified him the day before of the proposed closure.

“This consolidation gives us the opportunity to right-size those beats and make sure that your beats are reflective of the crime trends that you’re facing right now,” she said.

The number of police officers on the street in the District would remain proportionally the same, according to Deputy Chief of CPD Area 1 Wayne Gulliford. The district is currently the second most staffed of the city’s 22 districts, not counting the presence of additional UCPD officers.

In order to coordinate with the new district lines, the beats in the newly drawn boundaries will have to be redrawn, Gulliford said.

Burns also discussed possible future uses for the current 21st district building, including turning it into a field house for Dunbar Park. A field house would help fill an existing community need for “supervised activity for young people in Oakwood Shores and Oakland in the northern end of the ward,” Burns said.

Community members said they were not necessarily opposed to the consolidation.

“I appreciated that we had the meeting so that people can voice their concerns,” President of forum co-sponsor Coalition for Equitable Community Development Pat Wilcoxen said. “I’m not alarmed by what I heard. It may be a reasonable thing to take this opportunity to right-size [the districts].”