Winging it never looked so unscripted 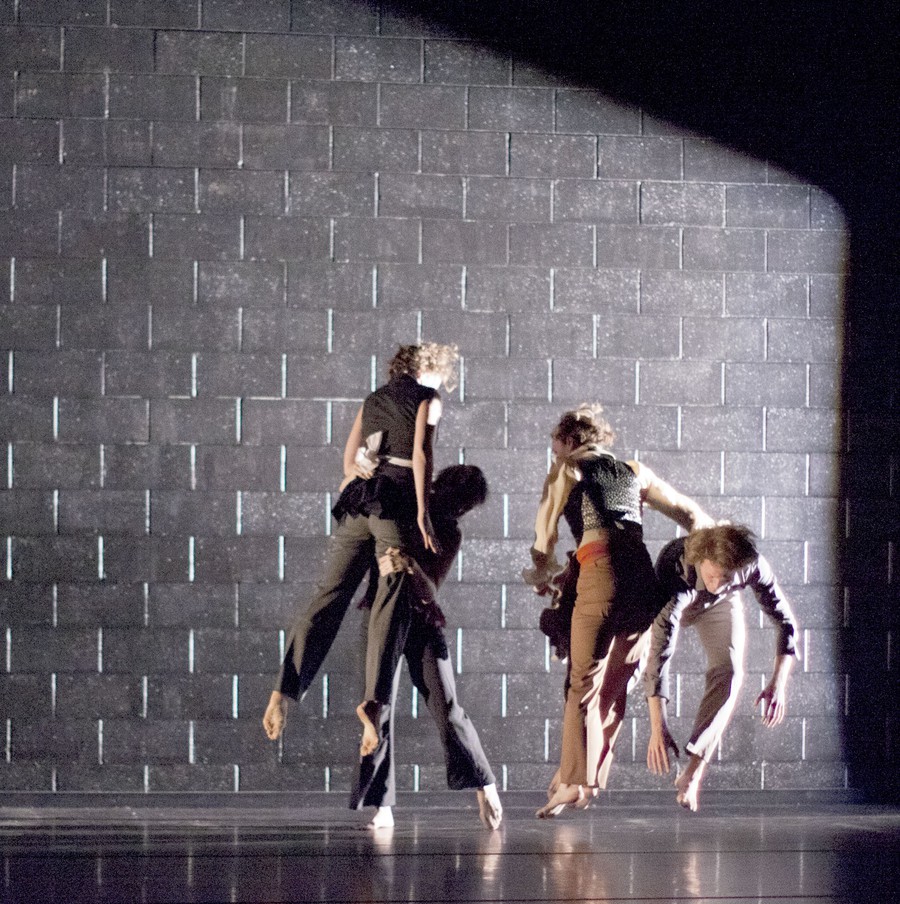 The Museum of Contemporary Art has a penchant for putting experimental and, oftentimes, dense material on their stage, and their newest production, a genuine work-in-progress, is no exception. Lucky Plush Production’s The Better Half fully embodies the quirky nature of MCA Stage, but it is also one of the most successful pieces of performance art I have recently seen. Through a delicate blending of dance and physical theater, Leslie Danzig and Julia Rhoad’s collaboration resonates beautifully with every-day audience members and refined theatregoers alike.

The Better Half rides a very fine line between meta-theatricality and reality, using elements of both to construct a powerful piece. The plot of the show is loosely based on Gaslight, a 1944 Ingrid Bergman film. Five performers are handed the script of Gaslight, which seems to materialize from nowhere, and they begin to embody the characters from the film. A powerful and invisible force, represented by technical elements such as spotlighting and sound, constructs the world of the play and dictates to the actors what they should do onstage. The show is at first intensely connected to this script and thus to the idea of a script as the core of a production, but as the show progresses, the script becomes less and less important to the characters, and other methods of creation become more privileged, including the incorporation of outside scripts and new, imaginary props.

Perhaps it is at the point in the show when the actors begin incorporating the script of The Bourne Identity, that we realize the great importance of meta-theatrics in The Better Half. Leslie Danzig, co-creator of The Better Half and most well-known for her Chicago work with the physical theater group 500 Clown, holds that, despite the production’s inherent meta qualities, “self-commenting can cause a loss of the possibility of investment in a story or in characters and can be superficial.” She refers to meta-theater as a “trap” to avoid because of this fear of investment and presence, but also as a tool to be used to comment on the physicality of the stage: “Let’s have both, a layer of consciousness of script, but also locate the accumulation of consequence and experience in the directness of action onstage.”

These layers of the show unfold beautifully through both acting and design techniques. The set is bare, but The Better Half uses appropriate amounts of light to create space, particularly in the designation of “paths” for the characters to follow, and sound, which serves mostly to highlight the choices that the actors make. These elements deftly accentuate the choreography, which couples brilliantly with theatrical blocking and presence. The show is, as Danzig intimates, meticulously choreographed, but with a playful hand so as to maintain the appearance of improvisation. Indeed, it is very difficult, at times, to tell whether or not the actors know what they are doing from the way they test out various acrobatic tricks during the performance. At the very beginning of the show, a replacement actor runs in from the lobby, shouting that he is sorry he is late—a perfectly believable entrance, since Adrian Danzig, original member of the cast, threw his back out performing that week. This sets the scene, so to speak, for the rest of the production’s spontaneity.

The design is simple, but perfect. One particularly effective moment involves a very small number of footlights that burn across the stage, casting enormous shadows of the actors against the back wall. This moment shows what design can do by merely accentuating the movement of the actors. “This production is in the service of what a show wants to be, with a very conscious design,” Danzig explains. “The premise of the work is that it’s happening in real time, so it must succeed without a set and the audience can’t know what’s rehearsed and what happens in real time.” The show explores what it means for acting to be immediate and real, not in a pre-made world of light and sound, but directed by a subtle, unseen authority who provides simple technical effects that create the world of the show and balances the production with meta-theatrical elements.

The Better Half, shows the propagation of a new text from onstage creation,” and showcases just how creative and spontaneous performance pieces can be. Some of the actors try on roles until one fits, others try out character voices for several minutes before settling on one that seems right. There really is an “immediate sense of the performer experiencing in the room,” as Danzig desires. It is this playful, quirky, improvisational aspect that makes The Better Half so much fun to watch. The clowning is fluid and integrated into the dance, creating humor and drama from simple movement. The actors create the space around them throughout the play, describing in detail such things as an enormous office desk, which is revisited in hilarious moments later on. The design adds just enough environment, the acting is rehearsed just enough—all of these things combine to create one outstanding performance.

Save for one seemingly interminable dance sequence, this production is perhaps the most audience-friendly piece of dance theater that I have ever seen. Danzig expressed her desire “to make complicated theater that is really smart, where the audience member is not many steps ahead of it…you can come into the theater without any previous knowledge of dance, theater or Gaslight and can have a really satisfying experience.” Without a doubt, Danzig got everything she wished and worked for.