Season closes on Senior day with loss to Wash U 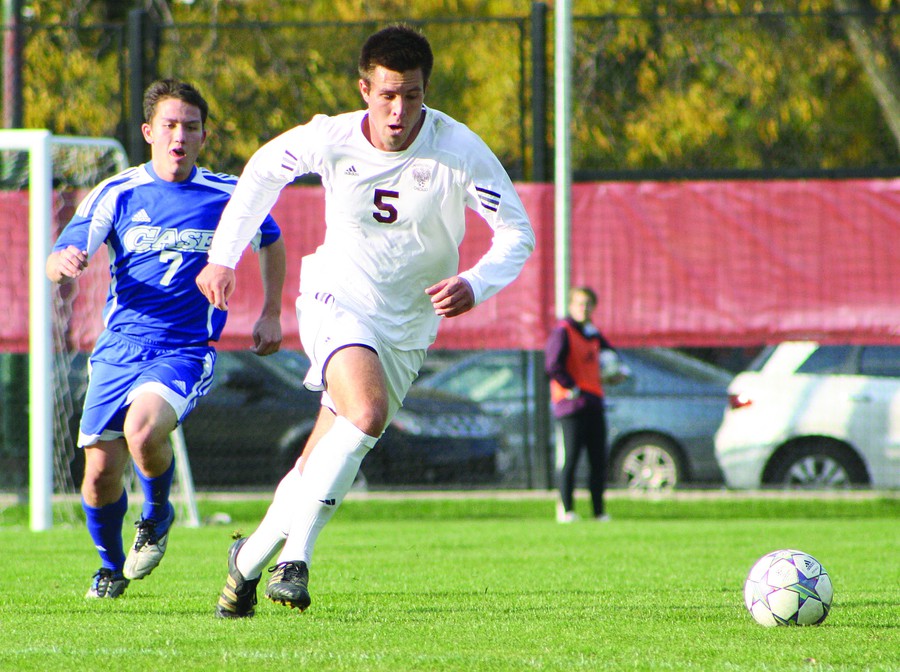 Seasons don’t always have a fairy tale ending. They don’t always conclude with rings or a trophy or a white picket fence. Sometimes the biggest wins from a season aren’t in the final record, but in the players who achieved it.

“The atmosphere around Senior Day was very emotional, and Wash U is always a big game. It had big implications for both teams, so it was crucial, which is exactly the atmosphere you want to play in on Senior Day,” fourth-year midfielder Stanton Coville said.

“I didn’t think Wash U, or really any team that we’ve lost to, for that matter, was better than we are. We just made mistakes that they didn’t and they were able to punish us for it,” head coach Scott Wiercinski said. “[The] big change going into next year will be to minimize those, and hopefully a year of maturity and a year of growth through those tough, difficult times will assure that next year, those same mistakes won’t happen and will have a major impact on what the final record looks like at the end of 2012.”

Saturday’s game ended with a score of 2–0 and with Wash U as the victor. The Bears ran into some trouble early against the Maroons, but finally pulled out a score in the 39th minute and went on to win the game. Despite the score, Chicago did play solid soccer.

“I felt Wash U really played a good game. They had a decent game plan and executed pretty well. I think that was probably the biggest difference between this loss and our previous wins,” Wiercinski said.

Late into the first period, Wash U second-year Jeremy Kirkwood scored his fifth goal of the season, angling a tough shot into the net’s upper corner. Kirkwood had missed the team’s last two games with an injury before returning to face the Maroons.

The score did not match the shots taken, however, with Chicago actually outshooting Wash U 7–5 in the first half. “We played good soccer, passed the ball well, and competed hard. They are a really good team and put away the chances we gave them. That is what it comes down to sometimes, they finished their chances and we did not,” Coville said.

The Maroons struggled a bit in the final 45 minutes after their solid first half.

“In the second half, we didn’t quite execute the plays the way we hoped. That made it less of a complete performance and made it difficult to come back after giving up the first goal,” Wiercinski said.

The go-ahead score for the Bears came in the 72nd minute, when Wash U fourth-year Cody Costakis made a long-ball pass to first-year Pay Estakhri, who kicked Wash U’s insurance goal into the back of the net.

Despite Chicago’s total shots on goal advantage of 16–12, Wash U controlled the game’s tempo with a 7–1 lead in corner kicks.

The win against Chicago grants Washington a share of the UAA title with Case Western, a team that the Maroons defeated just a few games ago.

There to lighten the loss for Chicago were family, friends, and fans in support of the 2011 Maroon team. The fans on Saturday displayed exactly the sort of family environment that the UChicago program and the UAA conference pride themselves on.

“It’s a great group that really contributes positively to the overall feel of the program and really helps us put the program and wins and losses in a little bit better perspective when, obviously, we’re upset. Getting to spend time with our family softens the blow a little bit,” Wiercinski said.

The crowd was primarily there to support the fourth-years in their last game on Stagg Field and in Maroon uniforms.

“We’re certainly going to miss them. They are a group of six guys that have contributed a ton over the past four years in terms of their work ethic, in terms of their leadership, in terms of their play on the field, and through their relationships off the field as well that they’ve had with their teammates and the coaches, including myself,” Wiercinski said.

After a successful season, the 2011 fourth-years are not only leaving behind a winning legacy, but a foundation to build on.

“I think, in a lot of ways, it was a very good season, in that we proved to ourselves and to a lot of other people that we’re competitive with everyone, but it’s not just good enough to be competitive,” Wiercinski said.

Their four years of playing soccer with the program has had a mutually positive effect on the other players.

“I have made friends for life and experienced things that I never could have otherwise; every one of these guys means more than can be put into words. I think we have truly left the program in a good place, and that is something we can all be proud of,” Coville said.