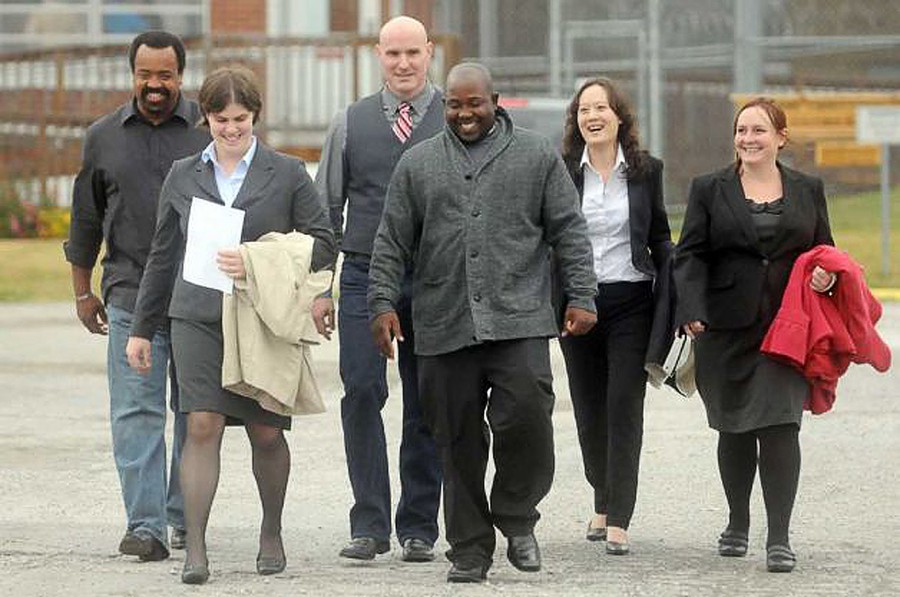 Courtesy of The Exoneration Project

Twenty years after the rape and murder of a young Illinois teenager led to the convictions of five minors, evidence brought by the Law School’s Exoneration Project has established the innocence—and secured the release—of at least one.

James Harden, of Dixmoor, IL, walked free last Thursday after wrongly spending 20 years in prison, his conviction vacated by strong DNA evidence indicating his innocence. Law students in the Project had been working on the case since 2008, after Harden’s father, who passed away while Harden was in prison, contacted them for help.

“Cases like this teach us that wrong convictions do happen in the U.S.,” Thompson said. “Mr. Harden’s conviction shows us that there are more flaws in the justice system than we notice or that we’d like to admit.”

Harden’s case was one of the first undertaken by the Project, one of four Law School clinics that provide pro bono legal aid in a number of areas, according to Tara Thompson (J.D. ’03), a staff attorney at the clinic and a lecturer at the Law School.

Students in the Exoneration Project directed much of their energy toward refuting the incorrect DNA analysis that wrongly established Harden’s guilt, said third-year law student Eileen Ho, who has been working on the case for a year. It was the testimony of two of Harden’s co-defendants that sealed his conviction, Ho said, even though DNA evidence found at the murder scene did not match any of the defendants.

“In 1995, DNA was just starting to get noticed. It was really the O.J. Simpson trial that brought DNA evidence to the attention of the American public. It was still pretty new,” Thompson said.

Investigators found that semen in victim Cateresa Matthews’ body did not match any of the five men convicted for her rape and murder, including Harden. However, the Illinois State Attorney’s Office reasoned that the semen could have belonged to Matthews’ boyfriend, and that the failure to match Harden did not necessarily exonerate him.

Thompson said that law students played a major part in litigating, researching, and developing strategies in the case. The law students were able to trace the original semen sample to the Dixmoor Police Department’s evidence storage facilities, despite a year of police insistence that the sample had been lost.

Students used the Combined DNA Index System (CODIS), a FBI database of criminal gene profiles, to match the DNA in the semen sample with Willie Randolph, a convicted rapist who was 33 at the time of the crime and had just served a 20-year sentence for robbery. Police apprehended Randolph in April.

“The State fought us at first, using the same reasons as last time,” Ho said. “It’s amazing how long it takes. It doesn’t take much to make a mistake, but the process for correcting that mistake is torturous.”

Harden’s release came as a surprise, according to Thompson, though it was the third conviction the state has vacated based on the project’s evidence. Harden and the project team were in court for the hearing last Thursday when the state announced it would drop the case.

“I’m grateful that the state could acknowledge the mistake,” Thompson said.

Though Harden has been released, his case is not yet over; the project will begin to pursue Illinois’ maximum statutory compensation. State law rules that for wrongful sentences longer than 14 years, the maximum compensation is $199,150, adjusted for any increase in annual cost of living, plus legal fees.

“Everyone has been congratulating us and we’re happy—but there is still so much more work to do,” Ho said. “When I first saw him sitting in prison, I spent the next two days crying. He’s spent the years in prison when other people are figuring out their futures. He was released with nothing. He has very little now. He wants to get his GED now.”

Two other defendants, Jonathan Barr and Robert Taylor, were released in cooperation with the Innocence Project and the Center on Wrongful Conviction of Youth, who respectively represent Barr and Taylor.

Since its inception in 2007, the Exoneration Project has resolved three cases, and has seven cases pending.

“The clinic has taught the value of pro bono work. When [Harden] was released, the look on his face, how he was completely floored; he’s crying—you dream of that moment as a lawyer. That type of high is incredible. It’s been a wild educational experience,” Ho said.