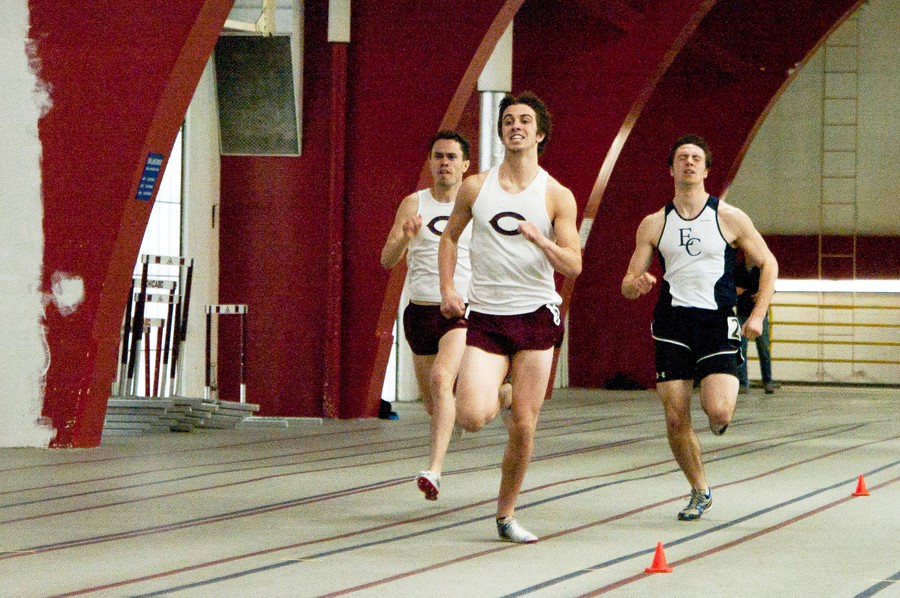 The Maroons triumphed spectacularly on Saturday at the 10-team Chicago-hosted Margaret Bradley Invitational. The men earned 206 total points to place second to Benedictine’s 97; the women, 221 to Carthage’s 96.

“We all stepped up across the board and performed to the level we know we are capable of. There were really stellar performances in all events, and I think we got the ball rolling for an unreal UAA championship next week,” fourth-year Liz Lawton said.

Lawton won the mile with a final time of just 5:01.37. “I actually had a lot of fun in that race. I ran a personal best and a provisional qualifying time in the meanwhile, so I can’t complain. It’s nice to know that I have a five-minute mile in my legs so if a future race ever comes down to the best miler, I have the faith and confidence to know I have an upper hand.”

The Maroon women won a total of seven events. Fourth-year Kristin Constantine claimed first-place in the shot put with a provisionally nationally-qualifying throw of 12.89 meters, and met the automatic qualification standard in the weight throw with her winning toss of 18.14 meters. Constantine was named the UAA Athlete of the Week last Monday.

“[This] was a great meet for our team. It was our last big push before Conference, and everyone really stepped up their performances,” second-year Elsbeth Grant commented. “Coming off of such a big win at home will definitely help us at Conference and hopefully push us to win next weekend too.”

The men were equally proud of their performance. “Before the meet, Coach Hall had a couple goals for us: Get in the best position we could be for conference, and come together as a team and support each other,” third-year Robert Cooper said. “I think we did a great job at both of those things, especially coming together as a team.”

“There’s nothing better than running a race and going past a wall of screaming Maroons; there were times when you could really feel the energy in Henry Crown. Especially towards the end of the day, during the 3k and 4x4, the whole building was hopping, and we had people all the way around the track cheering. That’s exactly the kind of environment we want to have next week for the UAA championships. We’re hosting, and we want all the other teams to know that Henry Crown is our house,” Cooper added.

“It was a good opportunity for our team to compete on our home track as a warm-up for next week’s conference meet. We’re hoping our familiarity with the field house will give us a bit of an advantage, so it was nice to get used to running here again after a couple weeks away from home,” said fourth-year team captain Brian Andreycak. “Nothing happened to monumentally shift our conference lineup, though we did have a few people improve their standing within the conference and place themselves in better heats for next weekend.”

Backlund’s improvement was one of the most crucial improvements of the weekend. His time of 4:18.99 practically guarantees a spot in the fast heat of the mile at UAA’s, putting him in prime position to score important points for the Maroons.

The Maroons will host the UAA championships this weekend at Henry Crown, and the team is tremendously excited. “It should be an electric atmosphere,” said Cooper.

“I literally cannot wait until conference. It will be the seniors’ last meet in Henry Crown, our last indoor UAA championship, and our last crack at some of those indoor personal records, so the pressure will be on. However, pressure is only the shadow of great opportunity. All I know is I’m following one rule and one rule only: Rule number 76, play like a champion,” Lawton added.

The UAA’s kick off at noon on Saturday and at 10 a.m. on Sunday.