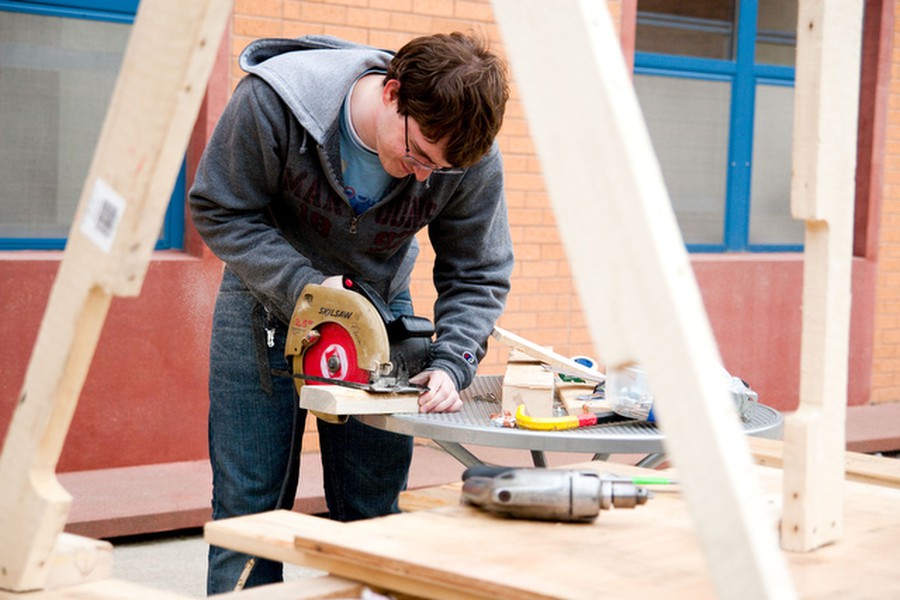 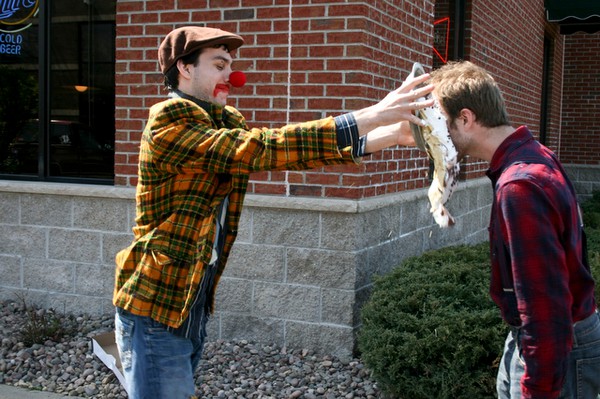 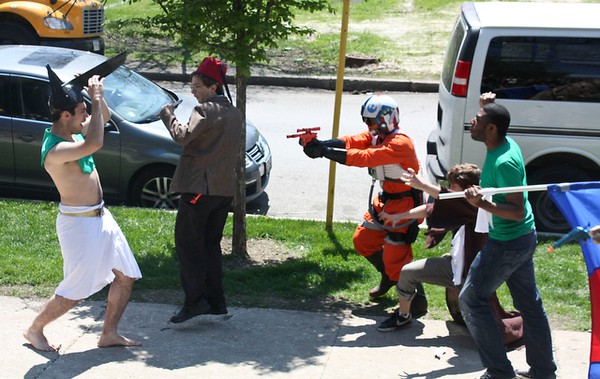 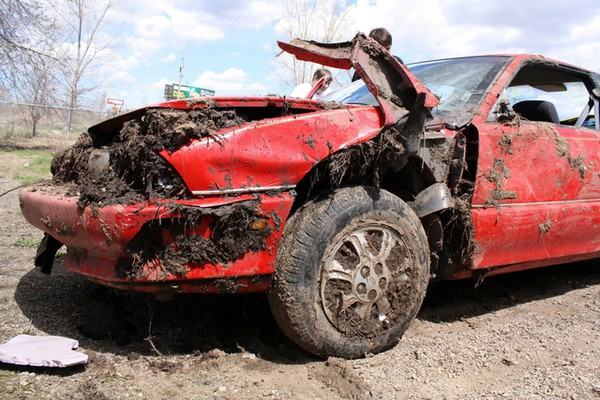 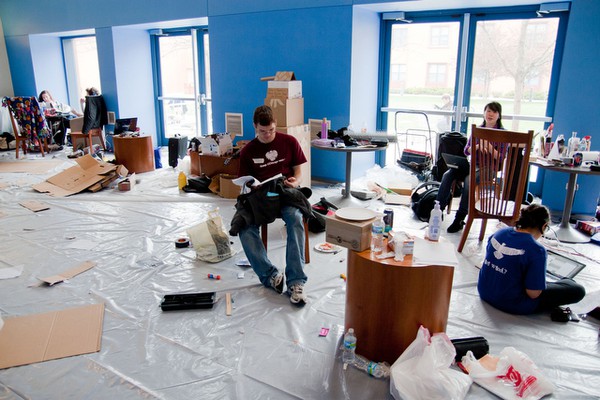 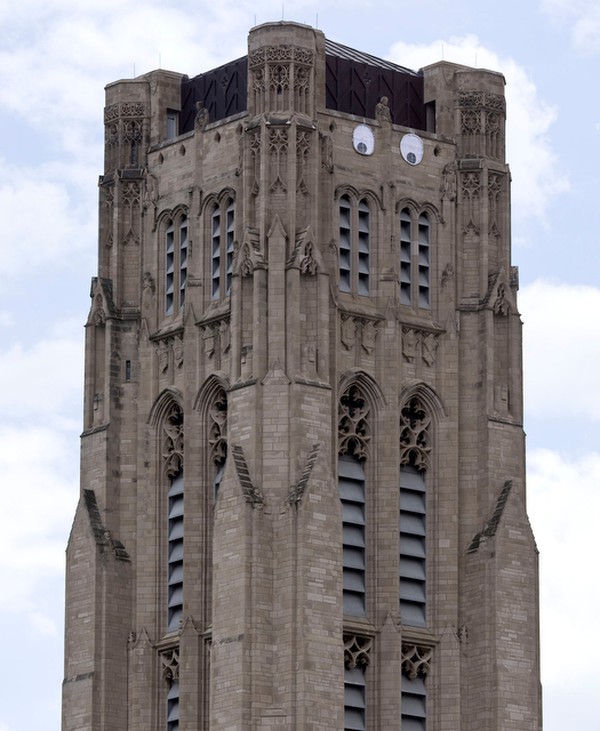 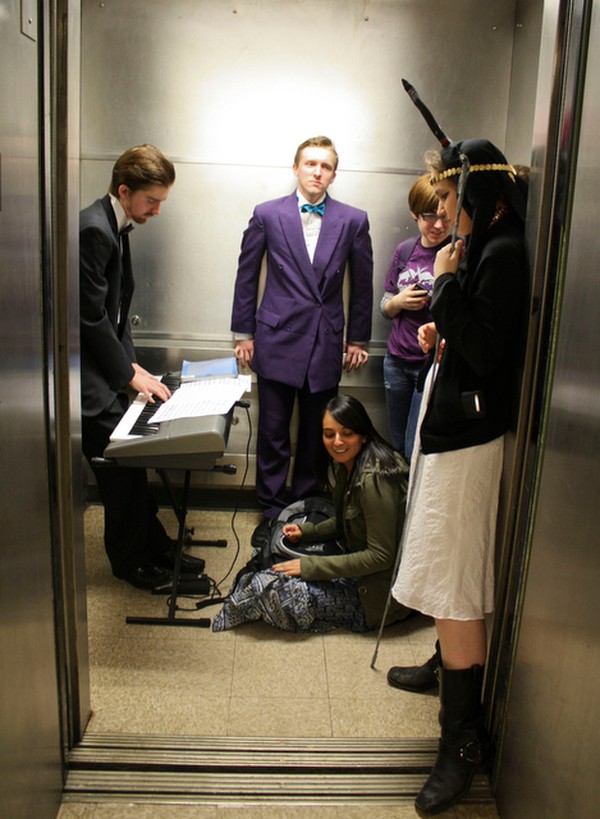 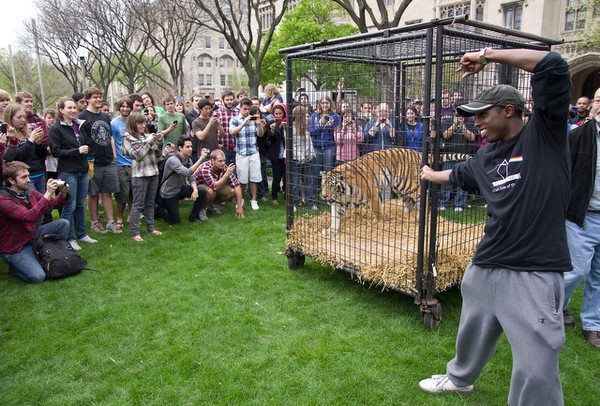 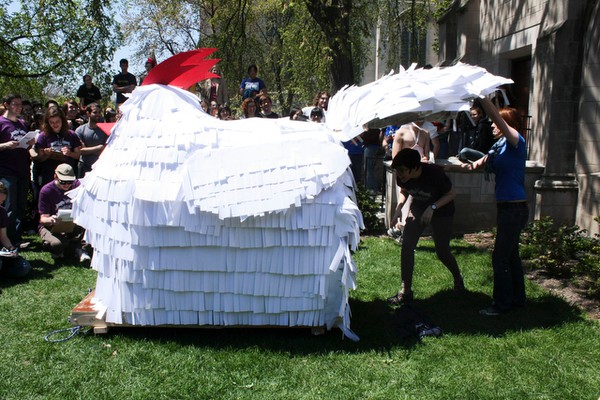 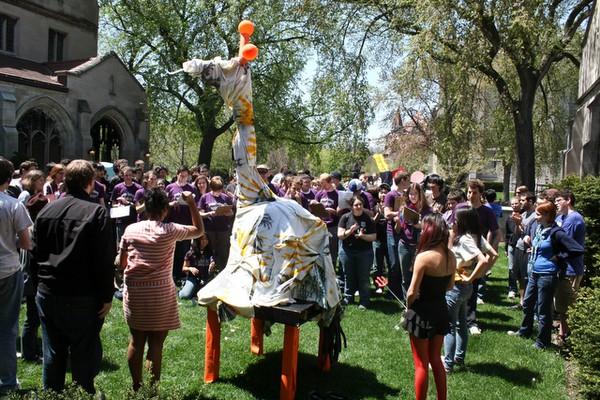 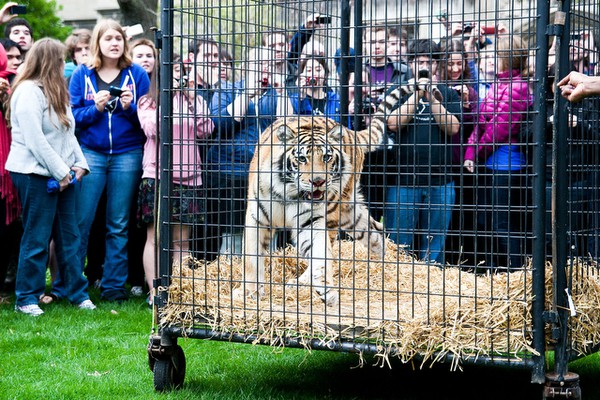 Car crashes. Big cats. A four-year dynasty kicked from its throne. Is this Hollywood’s latest summer blockbuster? No, just Mother’s Day at the U of C.

Burton-Judson (B-J) took the winning spot from Snell-Hitchcock after a four-year streak, while a pair of road-trip car accidents and caged animals on the Midway have led some to question the safety and spirit of the University tradition.

Judgment Day took place at Ida Noyes on Sunday, during which judges tabulated points and declared the winner.

B-J’s 2011 team, John D. Rockefeller and the Captains of Injury, won first place in this year’s Hunt after securing, among other things, a pair of Grammy Awards and a live lion.

Lion and tiger cause uproar

B-J helped to foot the $1,200 bill for the big cat with the assistance of The Rahmones (Maclean and Pierce), Phoenix Envy (Max Palevsky), Scampi People, Dear Judges (South Campus), and Blintzkrieg (Broadview, Stony Island and Flint).

The group mobilized after the The Dark Side of the Quad (Snell-Hitchcock) raised $1,100 in one day to acquire a tiger. Both the lion and the tiger were unloaded onto the Midway from trucks on Saturday afternoon, safely confined to their cages.

The high price of the two animals, as well as the cages that contained them as they snarled out at a crowd of hundreds, have led some to doubt the ethics and “Scavviness” of item number 265: “A lion, tiger, or bear. With trainer. On campus.”

The team sent an e-mail to the Scav judges, arguing that the item was not in the spirit of the Hunt. Instead, to fulfill the item’s requirements, they staged a skit involving a student in a bear suit and brought a Cub Scout to campus, Townsend said.

“The total cost per animal was somewhere around $1,200 just for the afternoon,” Townsend said. “What it got down to was that it would be these teams buying points.”

According to Townsend, the other teams ultimately secured their lion from the Chicago-based company Animal Rentals, Inc., which also provided Snell-Hitchcock’s tiger.

Fourth-year and Snell-Hitchcock Captain Nikolaj Zemesarajs argued that Snell-Hitchcock’s success was not due to superior resources. But, he admitted that the tiger’s $1,100-per-hour price tag was “completely ridiculous.”

Instead of appropriating its Scav budget for the animal, Zemesarajs said, the team solicited its roughly 100 participants for $20 donations. After first contacting Animal Rentals, Inc., on Friday morning, the team was able to raise enough money for the full cost by later that night.

“A lot of people think Hitchcock has a lot of money for Scav,” he said, “but we have nowhere near that kind of money for a tiger.”

Fourth-year and Scav Head Judge Grace Chapin maintained that, while certain Scav items are bound to be expensive, a high price tag does not necessarily take away from the creativity required. “We never put an item on the list assuming that the only way to get it done is to pay someone to do it,” she said, citing an item on last year’s list, which three teams completed at no cost, that called for a $3 million Stradivarius violin.

Breckinridge’s complaints weren’t all about the money, though.

“The big issue [was] potential exploitation of animals—the guy we were dealing with for the lion, the tiger, the bear, whatever, seemed like a really shady character,” Townsend said. “He was demanding cash on delivery, he didn’t know anything about where the animals were coming from.”

However, according to Chapin, the Office of the Reynolds Club and Student Activities (ORCSA) stipulated that the animal trainers have proper certification—an order both Flint Captain Polly Faust and Zemesarajs agree was obeyed.

“Some of the teams felt uncomfortable,” Faust said. “B-J checked it out a lot, made sure the company had all their permits in order and didn’t have any violations or anything,” she added.

“The guy brought a lot of paperwork to campus,” Zemesarajs said of the tiger trainer.

ORCSA, which vets the Scav list every year to make sure that none of the items are too dangerous, also required that both the lion and the tiger remain within their cages at all times and that they stay off of University property–hence the showcase occurring on the Midway, which belongs to the City of Chicago.

“Our guidelines came from ORCSA and the Risk Management[, Audit, and Safety] office,” Chapin said. Though she declined to comment on the ethical questions raised in Breckinridge’s boycott, she said that the judges do not list any items without the expectation that students will take them seriously. “When we write items, we fully expect that people will do them,” she said. “We’ve learned never to be surprised by what Scavvies can do.”

Representatives of Animal Rentals, Inc. could not be contacted in time for this article.

Crashes cause chaos for roap trippers

A day before fundraising began for Snell-Hitchcock’s tiger, however, an anxious mother and costumed Scavvies were dealing with car accidents on the road trips for two teams.

Every year, several items on Scav Hunt’s list require teams to travel out of the state in order to complete them, with this year’s teams making the trek to Wisconsin and Minnesota to collect items like “JFK’s ball of twine” (item 108) and to visit the National Mustard Museum in Middleton, WI (item 104).

The Max Palevsky team, consisting of fourth-year Joe Tomino, third-years Carolyn Bolger and Jason Rowley, and first-year Daniel Lewis, were driving outside of Eau Claire, WI, when, according to Bolger, they saw what they initially thought was a deer.

“I didn’t see it until the last minute, and then I did the one thing that you’re not supposed to do: I swerved,” Tomino, who was driving at the time of the crash, said.

According to Bolger, the car then flipped into a ditch on the side of the road, where it tipped onto its side. “No one was hurt, which was pretty much miraculous,” Bolger said. The car was totaled.

According to Rowley, the four students were taken to Sacred Heart Hospital in Eau Claire, WI, at the insistence of one team member’s mother.

After being released at around 2:00 a.m. Friday morning, they spent the night in a Holiday Inn. The next day, according to Bolger, one team member’s mother drove the team to Minneapolis, where they boarded a Megabus back to Chicago.

Bolger was adamant that Tomino had been driving safely when the accident occurred and that none of the road trip’s rules had been broken.

“We weren’t speeding at the time. We were driving carefully,” Bolger said.

Scav Hunt rules for the road trip, outlined in the official list, are explicit and strict in their focus on safety. Drivers must have “more than 2,000 miles driving experience” and are required to take shifts lasting no longer than three hours at a time. No driving is allowed between midnight and six a.m. as well.

Bolger maintained that the accident did not ruin her Scav experience, adding that she was happy that the team managed to track down item number 223—the Forevertron, an enormous scrap metal sculpture in Sumpter, WI.

Rowley, a first-time Scavvie, expressed concerns about the safety of the road trip and wondered whether it was possible to prioritize responsible driving in a Scav-like situation. “Because of the way things are structured, point-wise, it’s to your advantage to pack things into a short time,” he said.

In such a rushed situation, he said, “very rarely are people focused first on safety.” However, when asked if he would change anything about the road trip, he said that he did not have anything specific in mind.

Tomino thinks that the road trip should be changed next year. He declined to discuss specifics, but maintained that he would be open to working with Scav judges on the issue.

Chapin challenged the notion that the accidents were symptomatic of greater safety issues. “Every year we go into Scav Hunt making sure that everything will be done in a safe manner, and this year was no different,” she said.

Blintzkreig’s team also had a road accident involving a deer, though the incident was less serious than the one suffered by the Max Palevsky team and only set their itinerary back an hour.

“You can’t really avoid it, the deer was just by chance,” first-year Cindy Wang said. She also said that what happened to her team or the Max Palevsky team was not indicative of a structural fault in the road trip.

Even with the cat controversy and the road-trip accidents, many students believe Scav is simply being its quirky self.

“To my knowledge, Scav is crazy,” Faust said. “That’s the whole point.”

The end of a dynasty

As for the end of Snell-Hitchcock’s four-year reign, the prevailing opinion is that B-J’s rising star is nothing to complain about.

“Even though we drank beer out of their skull, I’m very happy for them,” Townsend said of the newly crowned champions.

Item 196 asked participants to “drink a beer out of the skull of your enemy. [7 angry points]".