The man behind the mascot 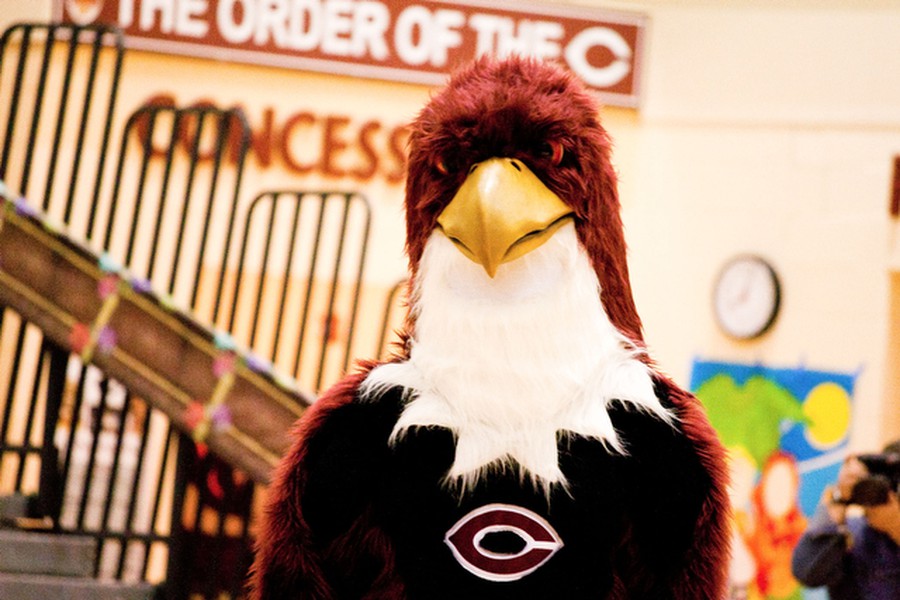 Fourth-year Stephen Bonnett has been delighting Maroon fans and athletes alike for the past three years as Phil the Phoenix. As Bonnett will be graduating in the coming weeks. the Athletics Department has started the hunt for the next school mascot. Bonnett sat down with the Maroon and told us what it was like to celebrate Homecoming, dance at Dance Marathon, and cheer on athletes....all dressed up as our favorite creature, the phoenix.

Chicago Maroon: How did you become the school’s mascot, Phil the Phoenix?

Stephen Bonnett: One of my friends was very active in the pep band and she had seen me being a force of energy in all different kinds of circumstances. She was aware that they were looking for a new mascot....and so she was on the lookout and recommended me to her boss at the time. All I had to do was e-mail her boss and say ‘I’m this person.’

CM: Which events do you go to?

SB: All of the home football and basketball games and whenever there are special events on campus, like when we host the UAAs it’s really important for me to try to make it to every sport. There’s a concentration, though, on football and basketball. I will also dress on my own. I do a lot of volunteer work for different charitable events on campus. Every year I’ve been the mascot I’ve stopped by Dance Marathon for a little bit and motivated everyone with a few intervals of dancing.

CM: Does the costume come home with you? Where is it kept?

SB: The costume is expensive, and they would not let me keep that at my apartment. It is kept at Ratner in a very safe, secure place. So I have to get a facilities manager to get it for me. The previous costume was much less impressive so that one they did let me take home one time, but this one—not a chance.

CM: How much does the costume cost?

SB: I’ve heard rumors, but it’s some number of thousands of dollars.

CM: What was your first event dressed as Phil? What was it like for you to be dressed up as a Phoenix?

SB: Homecoming of my second year. It was kind of nerve-wracking because I had no idea what was going to happen and Homecoming is one of the biggest events in athletics throughout the year. I remember walking out and still kind of learning all of the ways of communicating without talking and still kind of learning on the job pretty much everything. It was nerve-wracking in a good way. It was also kind of an awkward setting since everyone was just sitting with their friends at the pre-game barbeque thing.

CM: Did you grow past that awkwardness? What was that like?

SB: I definitely grew into the role once I developed a few different routines that I have. I have a pre-game stretching routine now that I am very proud of where I am doing all these crazy stretches that look even more preposterous in a big bird suit. Figuring out different ways for me to be doing intentional things during the time I was visible was something that made me a lot more comfortable.

CM: What do students say when they see you on campus? Do people know that it’s Stephen inside the suit?

SB: I have had a lot of people assume that it’s their friend (who isn’t me). They will be like ‘Oh, some random person, I know you’re in there,’ and I’m like, ‘No....I’m not.’ There are occasionally people who do know it’s me as over time I’ve told more and more friends as I have come closer and closer to graduating. Except for a few people, most of the members of the sports teams have no clue who I am since I have literally never interacted with them outside of the costume. It’s very weird that the varsity athletes don’t know who I am, since we’ve high-fived each other, head bumped each other, we’ve shared a lot of moments­—yet they don’t know who I am, when I know all the things they have done on the field or the court.

CM: Have you ever been harassed while dressed up as the mascot?

SB: It’s a bit more difficult doing the job of the mascot than most people would assume. There is a lot of interpersonal judging that you have to do through the limited visibility of the head. Whether someone is just playing along with you in good fun or whether someone has had maybe something to drink and is more aggressive, you have to be able to tell. When someone is playing along you can push it a little farther. When someone is more agitated you need to be the more mature one and calm it down or walk away. I’ve always been able to differentiate those situations from each other.

CM: Any moments where you weren’t able to tell, or things got difficult?

SB: One time I was at Summer Breeze and some super drunk people said, ‘Oh lets steal his head!’ And they did. Fortunately, one of my friends who knew I was the mascot chased them down and got my head back, while I was covering my actual human head with my wing to prevent other people from seeing what was up. That was a very traumatic situation.

CM: How do you think school spirit has changed during your time as the mascot?

SB: I definitely think that in my first two years when I was wearing a really unimpressive costume I got a lot of comments like, ‘We even have a mascot?’...a lot of incredulity. When we upgraded the costume to something that looks like it actually belonged playing some sports, it contributed to more legitimacy for athletics on campus. That people are aware of how many sports we can excel at here is a healthy thing for us.