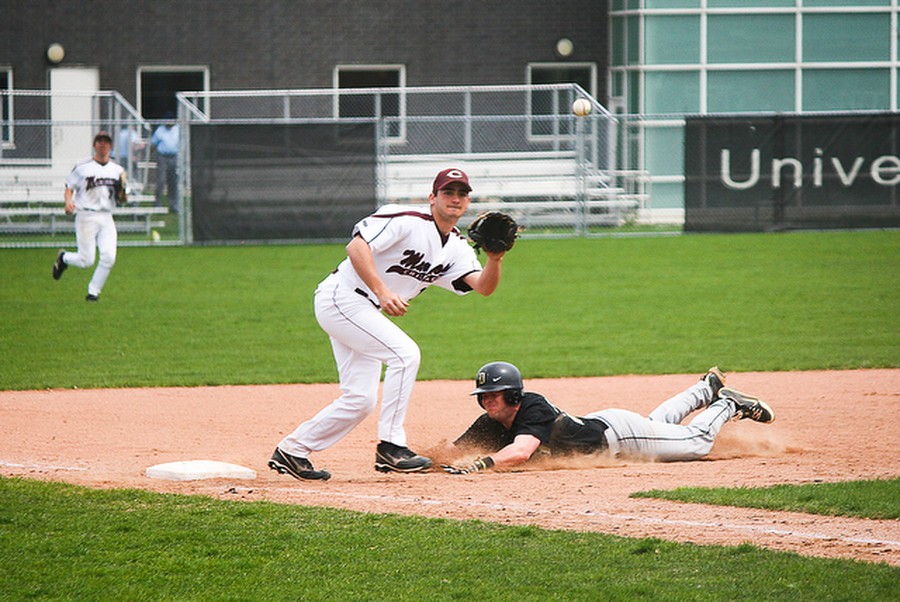 It is not often that a team has a chance to be perfect. With fewer than two weeks left in the regular season, however, the University of Chicago baseball team had its shot at achieving a flawless record when playing at J. Kyle Anderson Field. Unfortunately, the Maroons fell just short on Sunday, losing their first home game of the season. Facing DePauw (19—21) in their last weekend home series, Chicago (14—10) lost both games in the doubleheader 6—10 and 9—11.

On a day when the stands were filled and Chicago was looking to bounce back from a loss against Concordia Chicago on Friday, the Maroons attempted to follow the formula that had helped them win at home all season by swinging away. Hitting the ball was not the problem on Sunday, however, as the Maroons had plenty of opportunities to score. It was hitting when it counted that cost them the series.

After the team fell behind in the first game, fourth-year right fielder Marshall Oium and first-year third baseman Will Katzka started the furious comeback in the fifth, each driving in and scoring runs in a five-run outing to tie the game at 6—6.

DePauw rallied in the game’s final two innings, however, with right fielder Brendon Pashia hitting a two-run double to secure the victory for the Tigers.

First-year outfielder Connor Bartelman said, “DePauw’s timely hitting was key to their wins. We had runners in scoring position, but weren’t able to drive them in.”

The win went to DePauw starter Michael Chiaro (1­—2), and Hobs Donovan was given the save after holding the Maroons scoreless in the game’s final innings. The loss went to Maroon third-year Preston Atteberry, who came in as a reliever and allowed two runs in a little over an inning.

Game two was more of the same. The Maroons began the contest trailing 6—2 in the third before jumping ahead to a 7—6 lead behind a two-run homer in the fourth from designated hitter, Stephen Williams. Williams’ home run extended his hitting streak to 14 games. Chicago was not able to hold on to its lead for long, as DePauw retook the lead 8-7 at the top of the sixth.

A sacrifice fly by first-year first basemen Claude Lockhart sent the game into extra innings. The Maroons’ hopes for making the series even, though, were short-lived as DePauw shortstop Zach Starr knocked in a run at the top of the eighth with an RBI single, giving DePauw the lead. DePauw would go on to score twice more in the inning to take an 11—8 lead. Chicago scored once more in the eighth off a double from first-year Brett Huff, but fell short of evening the score.

The loss was handed to second-year Jack Cinoman after allowing the game’s winning runs in his two innings at the mound. DePauw reliever Zach Sroka (1—1) was credited with the win.

“We are hitting the home stretch of our season now. These next two weeks will ultimately define our season,” Bartelman said.

That four-day, five-game stretch begins on Tuesday, as the Maroons will face North Central College in a doubleheader at 2 p.m.