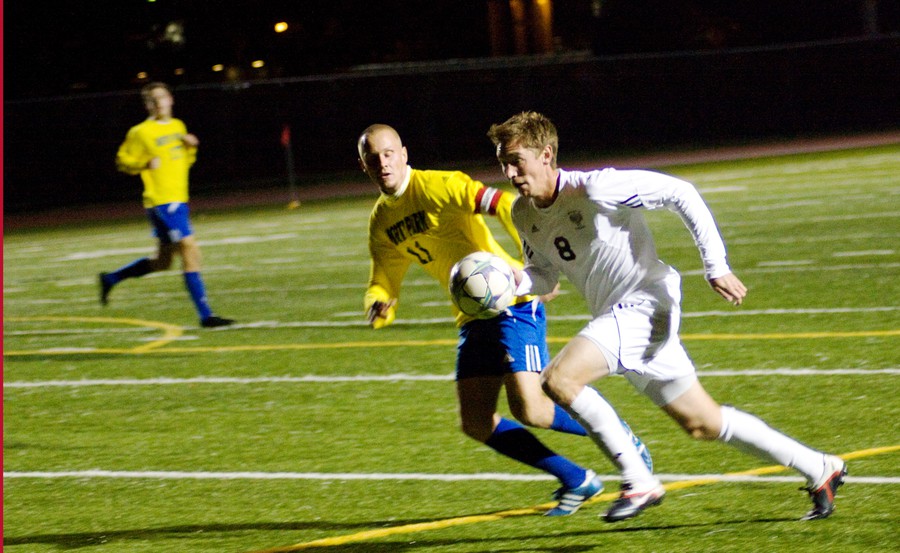 Since losing their season opener to Dominican, the Maroons have not looked back. They had been almost perfect, heading into Tuesday night’s game against North Park with a 5–0–2 record since their first loss. The Vikings had gained a little more notoriety for their efforts, being ranked eighth in the country heading into the match.

So for the Maroons, Tuesday was a test. It was a game that would challenge their growth against one of the nation’s best teams, and it was an opportunity to make a statement on a national level and to prove that their early season success was here to stay.

Most importantly, though, Tuesday night was the Maroon’s last obstacle in keeping their momentum and seven-game unbeaten streak alive before hitting UAA play.

Tuesday’s result was a 1–1 tie, but even without adding to the win’s column, all of the above goals were met.

“North Park was ranked highly in the region and in the nation, so a tie was a decent result for us,” fourth-year midfielder and defender Rashad Masri said. “We felt like we played well enough to win the game against the best team we’ve played so far.”

From the kick off North Park was out to back its reputation, scoring in just under the seventh minute of play. The goal came from a shot by fourth-year Kris Grahn on an assist from second-year Robin Hals. The ball was buried in the left side of the net.

It did not take long for Chicago to respond with an equalizer. In the game’s twenty-eighth minute, North Park was given a yellow card and the chips were laid out for fourth-year Stanton Coville.

Coville delivered as he has done so many times over his career, beaming the direct kick into the top right corner of the goal. The kick tied up the game, where it stayed for the remainder of the match despite double over time.

The goal was Coville’s fourth of the season and the 24th of his career, moving him into third place among Chicago’s all-time scoring leaders.

Yet, Masri believes the result was possible because of the team effort.

“Our midfielders and forwards did a very good job passing the ball well and countering them with a lot of speed,” he said.

This upfront play coupled with eight saves by first-year goalkeeper Elek Lane provided what the Maroons needed to hold off North Park.

The Maroon’s next match is even bigger than their last. Chicago opens up its conference schedule on Saturday, Oct. 1, at Stagg Field against Emory (4–4). That game will begin their chase for a UAA title and continue their journey for a spot in the national rankings and the playoffs.

“The team is happy to be off to a good start with a 5–1–2 record, but we also know that with our UAA schedule beginning, our games become increasingly more difficult and meaningful,” third-year midfielder Garrett Laird said. “Our game against Emory on Saturday is a great chance to avenge a loss from last season and start off conference play with a win against a perennially strong opponent.”