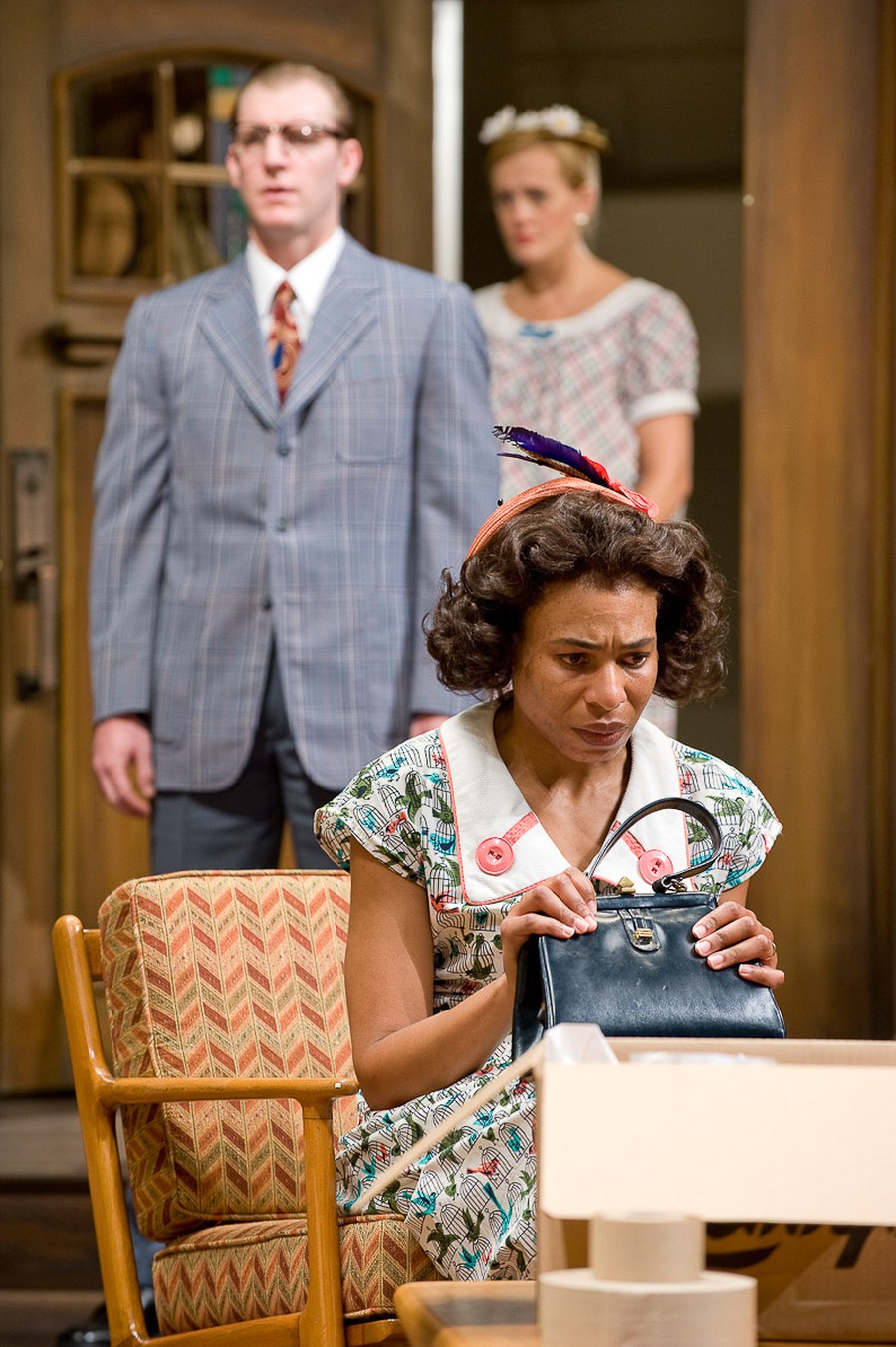 Somewhere between 61st and 63rd Street there is an invisible line. Although many treat it like an electric fence, most U of C students have crossed it painlessly. But even if some of us make a point to never venture near it, we all know it is there. Is it primarily a socioeconomic barrier, a racial barrier, or a juvenile fear? Whatever we call it, it is not unique to Hyde Park. Our city, famous for its urban planning, is also famous for its pantheon of divided neighborhoods that can each be “historic”, “desirable”, or “troubled” depenading on who you talk to. Each of these loaded adjectives is eventually applied to the fictional Chicago neighborhood in Steppenwolf’s Clybourne Park, a recent Pulitzer prize winner written by Bruce Norris and now directed by Amy Morton.

The play’s big issue at its 1959 outset is the entry of a black family into the all-white town of Clybourne. Russ (John Judd) and Bev (Kirsten Fitzgerald) are looking to get rid of their house, the site of their son Kenneth’s unspeakable, but well-known death, in a hurry. While their black housekeeper Francine (Karen Aldrige) fusses over the packing under Bev’s watchful eye, there are simultaneous visits from the preacher Jim (Brendan Marshall Rashide) and neurotic home-owner’s-association-type Karl (Cliff Chamberlain). The former offers unwanted spiritual guidance to a troubled Russ and the latter comes to pester about the “color” of the home’s new owners. Between these two intrusions, Russ faces more than enough prying to make his emotional journey from affable and stubborn to wrathful and unpredictable. John Judd does admirable work in this role that is less about its angry explosions and more about the slow accretion of old suffering and the agonizing reopening of psychic wounds.

Fast-forward 50 years and, via the magic of recasting, we have a new set of characters dealing with the same house and largely the same issues. Disturbingly enough, the frenzied fears of racist Karl have come to pass. In the intervening years Clybourne Park has become a predominantly black community, and apparently acquired that kind of unsavory reputation that is usually not rooted in specific experience, but rather floats around in some collective unconscious.

While Steppenwolf’s designers have been known to produce astounding set changes mid-scene (like a disappearing house in a set designed by Lisa D’Armour and Todd Rosenthal’s kaleidoscopic walls in A Parallelogram) the shift to the second act’s set is no less precise or enchanting for occurring behind the veil of intermission. The house now bears some marks of the neighborhood’s nasty reputation: Graffiti on dilapidated walls, a dead backyard tree, and other pronounced signs of slow decline. But the set, another one of Rosenthal’s, also suggests the possibility of renewal in the bits of construction equipment laying about, just waiting to go to work on peeling facades and doorless entryways. The new owners and expecting parents Steve (Cliff Chamberlain reprising, in a way, his other character’s monumental lack of tact) and Lindsey (Stephanie Childers, who also plays Karl’s deaf wife) are attracted by a perceived turnaround in Clybourne, a change that might be championed as urban renewal or maybe denigrated as gentrification.

It’s tempting to contrast the classically 50s compulsion to discretion and propriety in act one with act two’s more open expression. As it quickly becomes clear, such a distinction is modern myth, one that Norris explodes with grim glee. Steve and Lindsey are holding a homeowners’ meeting to discuss planned renovations with Kevin (James Vincent Meredith, who also plays Francine’s husband Albert) and Lena (the marvelously magnetic Karen Aldrige), whose aunt bought the property from Russ and Bev. The deferential tones and polite overtures do not take long to devolve into calamitous misunderstandings and a tortuous but hilarious scene where a few characters swap their most offensive jokes. Although Norris’ humor breaks up the unfolding drama, it is a credit to his writing that the comedy never lightens the tension, turning the screw tighter and tighter on a scene that’s already fit to burst with discomfort.

Race returns as a big problem and it turns out that fifty years have done very little for everyone’s ability to talk about it. In a sorely lopsided exchange from act one, Jim and Karl virtually interrogate Francine about her way of life to highlight the impossibility of interracial coexistence in Clybourne. In act two, the black voices are able to speak more freely, which does seem like progress, but the discussion provokes conflicts as vicious and upsetting as in 1959.

So where does that leave us? Is the thoroughly modern individual still constrained by fundamental inequalities and the oppressive atmosphere of political correctness, doomed to repeat the mistakes of the past? Probably, but it gets so much worse than that. Norris could have let his script ride this sobering continuity between past and present but he takes a daring leap off that path at the last second. In the center of his cyclic tragedy lies an unexplainable sorrow, something that cannot be apprehended even though it seems to (and literally sometimes does) sit in the middle of the room. This impenetrable sadness hints at not only a lack of progress, but also at an inevitable loss accumulating with each step forward and every word spoken. As time moves on, what gets left behind might be more disturbing than what stays the same.