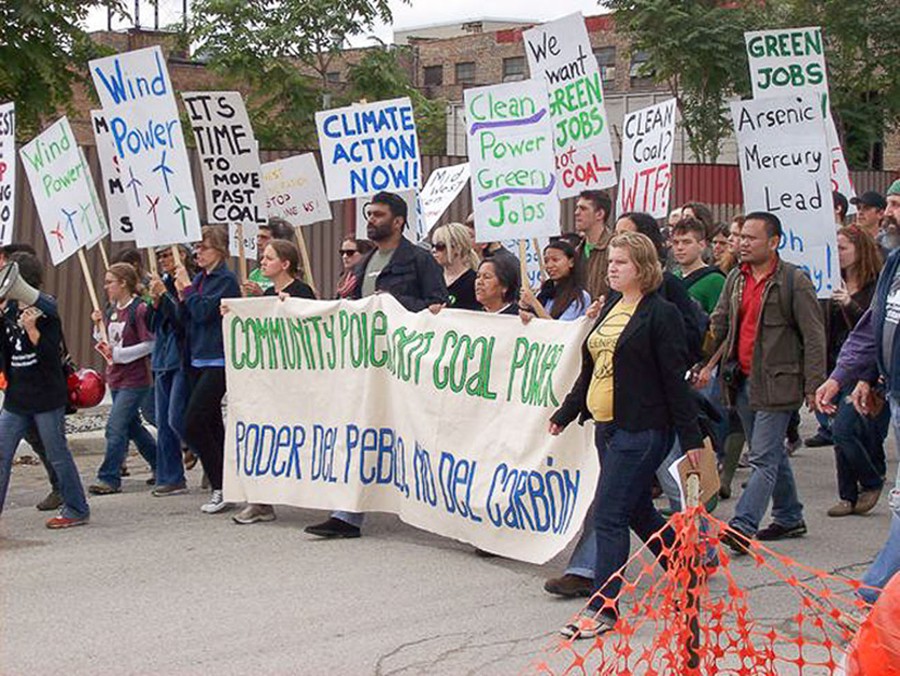 Fifteen University of Chicago students joined over 200 community activists at Chicago’s third annual Roll Beyond Coal rally to demand an end to the pollution emitted from the city’s Fisk and Crawford power plants, as a part of the International Day of Climate Action.

Around 70 bicyclists made the rain-soaked, three-and-a-half-mile ride that started in Daley Plaza in downtown Chicago. The protesters rode through the communities of Chicago’s near southwest side and ended at Dvorak Park in Pilsen, directly across from the Fisk generation plant.

“When we arrived at the park, the rain stopped and the sun came out,” fourth-year Caroline Wooten, founder of University of Chicago Climate Action Network (UCAN) and its former director, said. “It was like a sign from nature.”

The campaign to shut down the plants has seen a renewed wave of activity around the potential health threats posed to the communities of Pilsen and Little Village where they are located. According to researchers from the Harvard School of Public Health, pollution from these two plants is linked to over 40 deaths, 550 emergency room visits, and 2,800 asthma attacks annually.

The bikers were joined by over 200 additional community members who assembled to hear a host of speakers from the Chicago Clean Power Coalition, the event’s organizing body. Among the speakers was third-year Sandy Carter, executive director of UCAN.

“When I came to Chicago two years ago I was shocked to learn that there are two of America’s oldest and dirtiest coal burning power plants located within city limits, one of which is right behind me. And I know numerous other students are shocked when they learn of this fact,” Carter said. “As students and as the next generation, we are uniquely situated, in that we’re going to be suffering the effects of fossil fuels more than anyone else.”

Allison Fisher, a representative of the Sierra Club, attributed the revived energy behind the ten-year-long campaign to shut the coal plants to the role of student and campus activism. “This is a campaign that has a lot of different groups, but students like Sandy add a really unique face to this campaign. When it comes to truly understanding the long term effects, I feel students articulate it best. I heard that in her speech and I saw her hope.”

The keynote speaker was Greenpeace Executive Director Kumi Naidoo. His speech was a call to arms against Ted Cramer, the CEO of Edison International, the parent company of Midwest Corporation, which directly owns the two plants.

“[Naidoo’s presence] was extremely significant. He could’ve been at any rally, but he was here in Chicago,” Carter said. “Chicago is very important because if Fisk and Crawford shut down, that will be a historical precedent: We’ll be the first American city to have shut down our coal plants through community activism. It would set a huge precedent to other cities around the world and around the nation.”

The march left Dvorak Park and journeyed through Pilsen while peacefully chanting in both Spanish and English. Pilsen is a minority-based community, with 87 percent of residents identifying as Hispanic. According to a 2004 study by the League of United Latin American Citizens, 7 out of every 10 Hispanics live in counties that violate air pollution standards.

Before ending the march, the demonstrators stopped across from the main entrance of the Fisk plant. After taking a moment of silence, the demonstrators laid flowers in respect of those who had lost their lives as a result of the plant’s toxic emissions.

Representatives from Fisk did not prevent the protest or attempt a counter-protest as had occurred in the past. GenCorp declined to comment for this article.