It's a foggy day for London 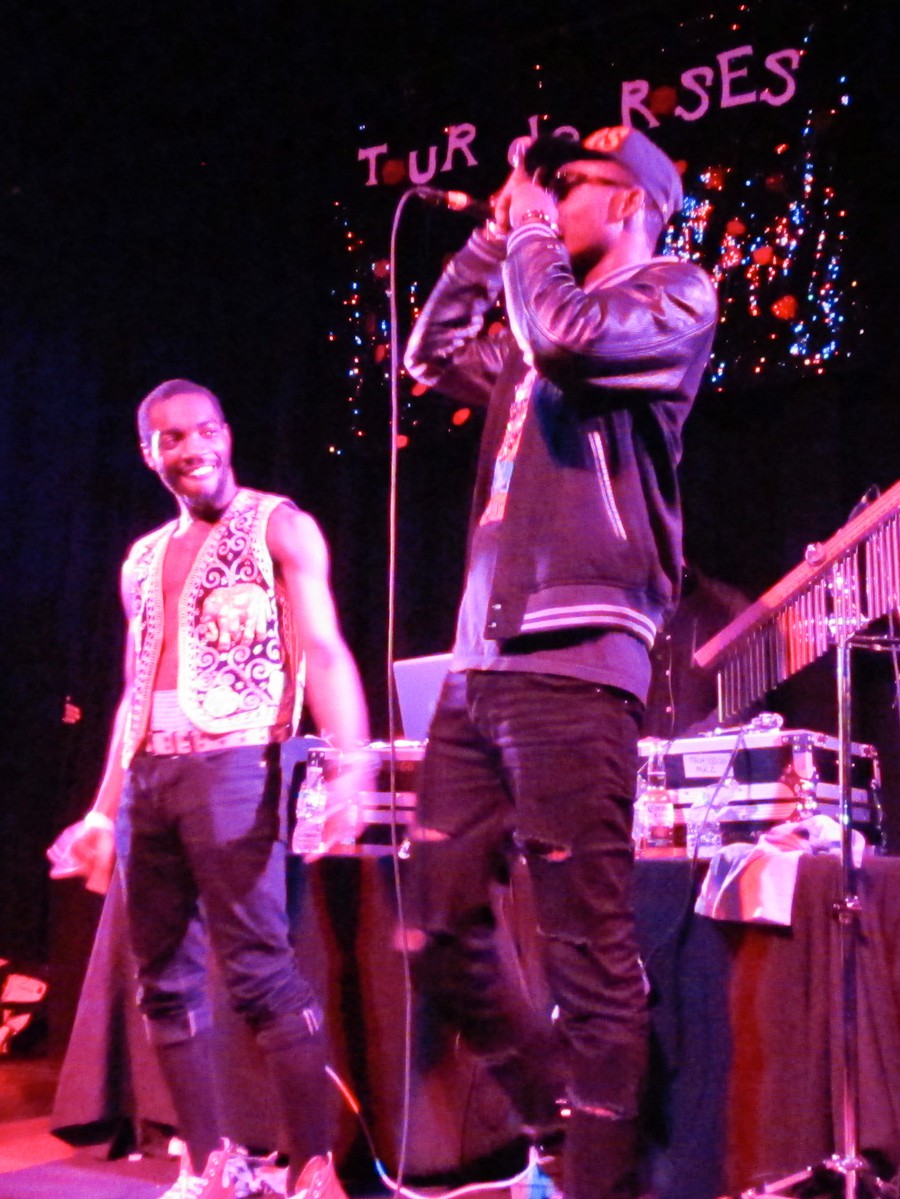 Emerging hip-hop pop star Theophilus London left his audience feeling uneasy after he cut tracks prematurely and repeated others during his sold-out “Tour de Roses” concert on Friday, January 13 at Lincoln Hall. I was impressed with the 24-year-old Brooklyn-based rapper’s major label debut, Lovers Holiday EP,  along with his other albums, so London’s dissatisfying, disjointed performance on Friday surprised me. I left the concert wondering, “Is Theophilus London ready to headline?”

While sampling the Pinky and the Brain theme song, a strange but interesting choice, London instructed his DJ to stop the track and restart it—only to abruptly leave the stage, perhaps due to frustration. Episodes like this one slowed his momentum and the audience’s dancing bodies.

Despite the distractions, London had his moments. After hours of anticipation and four opening acts (Lunice and Chrome Sparks were noteworthy), the energy level skyrocketed when London and his “LVRS” varsity jacket-wearing “band” (guitarist, bassist, other rapper, and DJ) finally emerged with a performance of the brand-new “Last Night (LVRS ANTHEM),” which he released on January 11 via SoundCloud and Twitter. The crowd gyrated approvingly to the synth-heavy hip-hop beat about “that party from last night,” and fans quickly began singing along to the hook.

The crowd also responded enthusiastically to “Girls Girls $,” “Last Name London,” and “I Stand Alone,” all of which are featured on London’s July 2011 album Timez Are Weird These Days. Audience members yelled “Day one!” showing their approval of his earlier tracks. Before the disruptions started, London and his crew livened the atmosphere by dancing, switching places on stage, crowd surfing, and rapping at each other in dueling stances. The bass player even took off his shirt and London drank a Corona.

After the concert, Matt Rucins, talent buyer for Lincoln Hall, commented, “I’ve never really seen anything like that. He needs to get a little more disciplined.” When I asked him what he liked about the show, Rucins half-jokingly replied, “I liked when he played the songs and finished them.”

Appearing in Rolling Stone, on the Late Show with David Letterman, and in Vogue as “Artist of the Week” on June 15, London has been making a name for himself over the past few years. He generated some publicity with his well-received performance at the 2011 Cannes Film Festival. But what makes London a standout?

“Fun” was Rucins’ word of choice when I asked him why he decided to host London. “His music is fun and a change of pace from the typical stuff we usually bring to Lincoln Hall.” Rucins characterized London’s music as “all over the place. I hear dance, rap, pop, R&B, electro, and hip-hop, especially on [his] album[s].”

“You like that progressive shit!” London cheered to the crowd on Friday. While many artists are jumping on the mixed-genre bandwagon, London is a leader of the movement. “He is not necessarily doing anything groundbreaking,” Rucins said, “although he does it better than a lot of other people who attempt to combine a bunch of different types of music.” London’s songs display his eclectic personality and genre-bending creativity—two tracks never sound alike.

Other contemporary artists who fall under the same “non-genre” category include Maximum Balloon (a venture of producer and TV on the Radio founding member Andrew Sitek), Little Dragon (an indie pop/electronic operation headed by Swedish-Japanese vocalist Yukimi Nagano), and Quadron (a funk/soul/R&B duo from Denmark).

While London shares a similar “musical mission” with the aforementioned groups, Rucin made an interesting remark about what sets him apart. “If London had a little more discipline, he could bring out a whole band—kind of like LCD Soundsystem.” While this kind of pursuit may not seem feasible for London at the moment, it is something to look out for in the future.

What other musical mischief is London brewing? He told his audience that he has been working on a new album entitled Lovers Holiday 2: Rose Island and a street album, as well as some singles.

Musical talent aside, London makes excellent use of social media in order to stay in touch with his fan base. He frequently posts updates on his Facebook fan page (over 84,000 “like” London); uploads photos, videos, blurbs, and tour dates to his Tumblr (timezareweird.tumblr.com); and tweets incessantly (@TheophilusL; he tweeted 14 times on Tuesday).

Given London’s obvious love for the fans, and his fans’ dedication to him, I hope this show is the exception, not the rule.