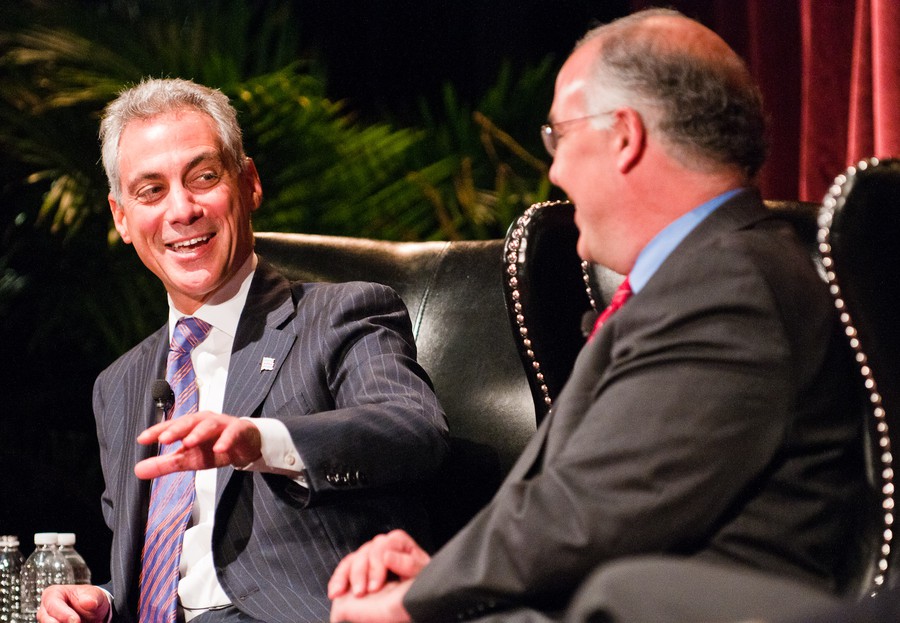 Former White House senior adviser David Axelrod (A.B. ’76) assembled the panel, which “This Week” anchor George Stephanopoulos moderated. The discussion began after Axelrod publicly announced plans to establish a new institute for the study of politics here at the University.

Much of the discussion focused on the political viability of current Republican front-runner Mitt Romney, and the message that President Barack Obama would have to send to voters in order to win re-election. The panelists also examined whether Americans had reason to be optimistic about their government.

“The Republican field I don’t think at this point has distinguished itself,” said Castellanos, who served as a top adviser on Romney’s 2008 presidential campaign. “Romney I think is still the only candidate who can still win the Republican nomination.”

Asked what Obama should say in Tuesday’s State of the Union address, Brooks said that it was an opportunity for the President to remind Americans to be optimistic.

Maddow agreed that Americans were pessimistic about what their government could accomplish, and said that the President needs to focus on small, specific policies that will bolster the nation’s confidence in Washington.

Emanuel, who helped engineer several of Obama’s keystone policies during the beginning of his presidency, disagreed, arguing that specific policy details should come after an election, while campaigns are a time to focus on big ideas. Emanuel said that the President’s democratic base will “rally to the battle cry,” but that the biggest challenge to re-election will be winning over independent voters skeptical of how Obama has handled the economy.

As Axelrod, Obama’s chief political strategist, sat a few feet away, Maddow argued that Republicans have won a significant battle of public opinion.

“People know instinctually, in their sixth sense, we’re at kind of an inflection point as a country, and they know their lives are going to be part of that inflection point,” Emanuel said. “Elections are all about the future. They’re about tomorrow. If you’re going forward looking through the rearview mirror, they’ll catch you on that and there will be an accident.”

The panelists concluded the discussion with a reflection on the current political climate, and the future of both major political parties. Brooks said that today’s polarized political culture is connected to the disappearance of humility and self-effacement.

“If you have a sense of modesty about yourself, you realize that you need the people who disagree with you because of your own flawed understanding of the world,” he said. “If you think you have the truth by the short-hairs, they’re just in the way.”

A group of protesters sitting in the balcony interrupted Emanuel when he first spoke, criticizing his decision to lay off 363 public library employees last year. The Mayor paused while the demonstration continued, and the protesters were escorted from the room after a few minutes.