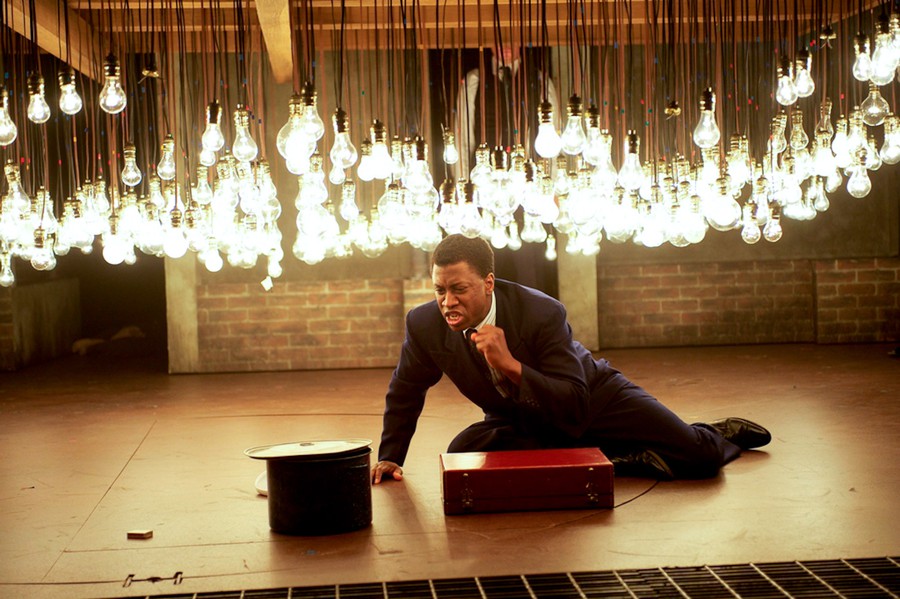 A glowing mass of light, hundreds of bulbs strong, hangs ghostly in the air above the stage at Court Theatre. The cloud cuts to black, and from the close darkness, a haunting voice reverberates: “I am an invisible man.”

The stage production of Ralph Ellison’s Invisible Man made its world premiere on Saturday here in Chicago, where adaptor Oren Jacoby and director Christopher McElroen have tackled the significant challenge of translating this giant of an American classic to the stage. The production explores, with gritty and intimate honesty, the tensions surrounding race, identity, and power that Ellison emphasizes in his depictions of the turbulence of the American 1930s.

I’ll admit, as I sat in the audience and readied myself for the three-hour presentation, I was a bit skeptical—the story passes through so many locations and times and states of mind that I had no idea how they were going to pull it off. Cross-country travel? Explosions? Flashbacks? This was going to be interesting.

But my apprehensions were soon quelled as the nameless protagonist (played by Teagle F. Bougere), full-voiced and expressive, gripped my attention with an energetic sincerity that was both humorous and deeply distressing. The audience travels with him from the Deep South to Harlem as he discovers, through failures, sabotages, and mishaps, from colleges to paint factories to hospitals to brotherhoods, his role in society—namely, that he has none. Bougere’s performance, nothing short of extraordinary, offers a rich glimpse into the young man’s acceptance of his own invisibility. I felt drawn to the story by the depth of his emotional scope (I mean, quite literally, drawn—more than once I found myself on the physical edge of my seat, leaning forward into my neighbor’s view…no wonder she kept clearing her throat).

Throughout his travels, the young protagonist encounters a range of memorable characters, including Brother Jack (Lance Stuart Baker), the leader of a multiracial Brotherhood dedicated to social change. The group forces our young invisible man to further question his identity, as his role in the not-so-subtly communist Brotherhood is largely characterized by manipulation. The severity in Baker’s performance is both convincing and unsettling, and contributes to the growing sense of chaos that gains speed in the last part of the production and finally erupts in race-driven pandemonium that chases the protagonist to his underground lair, where we first encountered him—“the end is in the beginning.”

Against the backdrop of the flashing riots, hot-blooded Ras the Exhorter (Paul Oakley Stovall), an outspoken sensationalist who threatens the Brotherhood’s peaceful tactics, incites more violence. Stovall produces several compelling performances as bit characters throughout the play (including a quick but lovely song during the funeral of one of the Brotherhood’s members), but he is most memorable as Ras, embodying the character with a true passion and fiery bursts that invigorate the story and keep its fast-paced action rolling.

Both A.C. Smith and Kenn E. Head demonstrate impressive range throughout the piece (I almost didn’t recognize Head as the humorous yam-seller after having seen his chilling performance as the protagonist’s grandfather), and Christopher Boykin’s interpretation of Todd Clifton, the young member of the Brotherhood who is shot down while fleeing from a policeman, inspires honest compassion and ultimately, pity. The cast assembles and harmonizes with a subtle fluidity that lends a unique sense of color to the entire production.

Though the driving power of Invisible Man lies in the production’s skilled cast, Troy Hourie (Scenic Design), John Culbert (Lighting Design), and Josh Horvath (Sound Design) have created a truly thrilling world of spinning doors, sparking electricity, and blinding explosions. While Alex Koch’s projections lend a tangible sense of movement to the production, they are distracting at times—I often found myself confusedly staring at a screen at the back of the stage that depicted a Picasso-esque variation of morphing facial features, asking myself, “Where did that nose go? Why is Quasimodo on stage?” But overall, the scenic presentations generally infused the production with a powerful energy.

So, they won me over—they really won me over. The production was captivating, exhilarating, and profound. At the close, exhaling deeply beneath the once-again glowing cloud of light, the protagonist is anything but invisible—and for that, the audience is thankful.